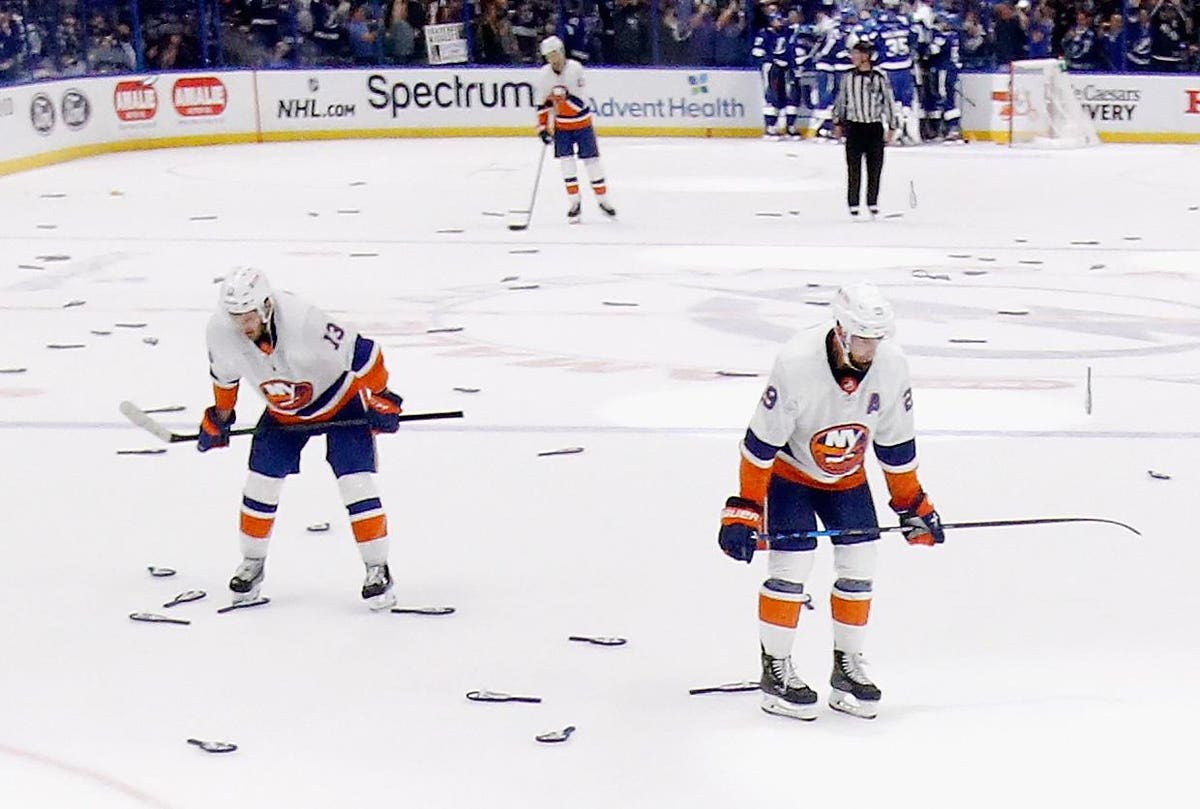 As the Islanders begin their season against the Hurricanes tonight, an air of surrealistic disbelief continues to tinge the memories of their captivating run to the edge of the Stanley Cup Finals last spring.

As in, did all that really happen?

It was remarkable enough that the Islanders — 37 years removed from the last of their four straight championships and 36 years removed from their most recent trip to the Stanley Cup Finals — reached the NHL’s final four for a second straight season by playing 19 intense playoff games spanning 41 days as spring turned into summer.

But they played nine of those games at Nassau Coliseum, which closed in 2015 and was begrudgingly reopened on a placeholder basis during the 2018-19 season as the Islanders waited for their new arena to be constructed at Belmont Park.

As capacity restrictions were relaxed, pandemic-weary fans, hopeful the worst was finally behind them, filed in and let loose 15-plus months of anxiety and pent-up energy. There were singalongs to classic rock staples (sorry, but Lit’s “My Own Worst Enemy” now qualifies as classic rock) as well as the National Anthem after singer Nicole Raviv’s microphone didn’t work prior to a second-round game against the Bruins — a moment that head coach Barry Trotz said moved his sister, living in Canada, to tears.

“The crowd (has) a big effect on momentum, I think, and as we started to get that back you started getting the emotional connection with the fans,” Trotz said this week. “You could feel (in) Game 6 in the Coliseum — we were down in that game and we started building some momentum and the fans were on it and they wouldn’t let us off the hook.”

There were trending moments on Twitter: The Jets, the Islanders’ former neighbors across the street at Hofstra, showing up and chugging beers…dynasty mainstay Clark Gillies chugging a beer and smashing the can against his 67-year-old head…befuddled Bruins head coach Bruce Cassidy giving the Coliseum’s former lacrosse tenants, the New York Saints, publicity they hadn’t enjoyed in 30 years…and of course fans throwing everything that wasn’t locked down on to the ice after Anthony Beauvillier’s overtime goal in Game 6 of the semifinals sent the series back to Tampa.

And then it ended June 25 with a 1-0 loss — via a short-handed goal — to the Lightning. It was a feel-good and valiant run for a no longer dormant franchise — the 49 playoff games the Islanders have played the last three seasons are one fewer than the franchise played the previous 24 seasons combined — and provided Islanders fans too young to remember the dynasty years their own touchstone moments.

“We’ve had a great history to fall back on with this organization with the glory years, but there’s been also some choppiness to the organization in the last probably 20-some years,” Trotz said Tuesday with a diplomatic deftness. “I think that’s stabilized. I think this group feels very proud of what they’re starting to build.”

But the frantic final seconds of Game 7 — when the Islanders fired three desperate shots on goal before defenseman Ryan Pulock helplessly chased the puck into the neutral zone as time expired — and the sight of a near-catatonic Josh Bailey and a teary-eyed Mathew Barzal in their press conferences afterward offered reminders the job wasn’t finished for those on the ice or in the executive suite.

The playoff run felt even more ethereal after a summer in which the Islanders operated with Lamoriello’s trademark silence and secrecy. Other than trading Nick Leddy and Andrew Ladd in deals intended to create salary cap relief and losing Jordan Eberle to the Kraken in the expansion draft, the Islanders did nothing — at least officially — until Sept. 1, when the team finally announced the long-assumed re-signing of free agents Casey Cizikas and Kyle Palmieri and restricted free agents Beauvillier and Ilya Sorokin.

Lamoriello would never declare the Islanders were loading up for a Cup run. But that’s the message delivered by running it back with mostly the same core plus captain Anders Lee, who missed the final 29 regular season games and the playoffs last season due to a torn ACL, as well as 44-year-old defenseman Zdeno Chara — who has played so long, he actually wore the Islanders’ post-fisherman jersey as a rookie in 1997-98 — and 37-year-old left winger Zach Parise, the son of early Islanders legend J.P. Parise.

“Deepest team we’ve had since we’ve been here,” Lamoriello said.

It’s also the most serious Stanley Cup contender the Islanders have put on the ice in almost two generations— a team that will be looking to rewrite the ending to last season while also authoring a memorable opening chapter at a packed UBS Arena, the modern facility the franchise has lacked since at least the late ‘80s.

“I think guys are excited, first of all, to be back after the run we’ve had and being that close — sometimes, you’re almost, in your mind, a little too hyped up and wish you could jump right back to that scenario,” Brock Nelson said. “With the new rink (and) the excitement, the fanbase I think has grown. The passion that they have is second-to-none. I think everyone’s all-in on the Island.”

Yet there will also be an air of mystery to this season consistent with the clandestine summer and the surreal spring that preceded it. While the Islanders seem primed to take the long-awaited final step, their best path may not include winning a Metropolitan Division in transition. The Islanders, who appear to be the division’s co-favorites with the Hurricanes, finished tied for 14th and 12th, respectively, in the NHL in points the previous two seasons.

Only one of the previous 13 teams to lose in the final four in back-to-back seasons — the 2000-01 Avalanche — followed up the consecutive near-misses by winning the Stanley Cup. None of those teams ever tried returning to the final four or beyond after mounting those two semifinal trips in a span of fewer than 11 months.

And the Islanders will embark upon a full 82-game season with the oldest roster in the league, one that will begin the season with a 13-game road trip — the second-longest in NHL history — while the finishing touches are applied to UBS Arena before the home opener, scheduled for Nov. 20 against the Flames.

Injury concerns have already cropped up for the Islanders, who will open the season without starting goalie Semyon Varlamov and identity line winger Matt Martin, neither of whom played in the preseason.

The intrigue is just beginning for the Islanders at the start of a season in which the question goes from did that really happen to can all this really happen?

“Our unfinished business is we’ve got to take the next step, be it getting to the Finals or winning a Stanley Cup,” Trotz said. “Anything below that is going to be considered a failure within, probably, the group, probably myself and probably the fanbase.

MIAMI — In a welcome but likely brief victory for supporters of abortion rights, a judge in Florida blocked a state law banning abortions after 15 … END_OF_DOCUMENT_TOKEN_TO_BE_REPLACED

NEW YORK--(BUSINESS WIRE)--Stake, which provides Cash Back and banking services to renters, announced today the completion of its $12 million Series A … END_OF_DOCUMENT_TOKEN_TO_BE_REPLACED

The Sacramento home where Ronald and Nancy Reagan lived during his tenure as governor of California has hit the market for $5 million.Built in 1929, … END_OF_DOCUMENT_TOKEN_TO_BE_REPLACED