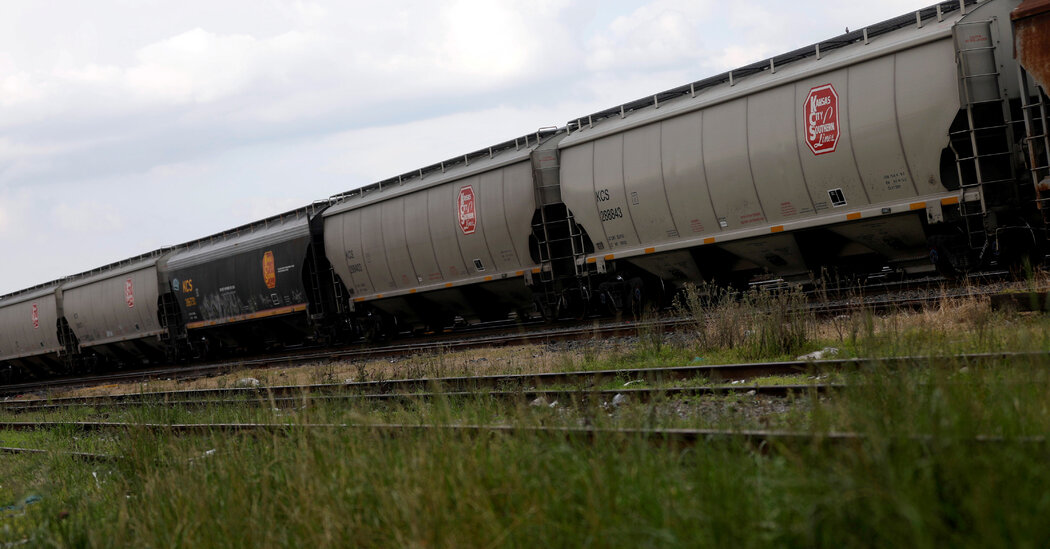 Canadian Pacific and Kansas City Southern announced plans on Sunday to combine in a $29 billion deal that would create the first railroad network connecting the United States, Mexico and Canada.

It is an effort to capitalize on the trade flows expected to run through the three countries after President Donald J. Trump signed the United States-Mexico-Canada Agreement into law last year. It’s also a bet on the strength of the industrial economy as the United States rebounds from the pandemic.

“This deal just has so many longer-term strategic advantages,” Kansas City Southern’s chief executive, Patrick J. Ottensmeyer, said in an interview. “Our board really saw the value in putting these two companies together right now.”

$208 a share offer from the Blackstone Group, a private equity firm, that Kansas City Southern rebuffed last year. Shares of Kansas City are up 12 percent year-to-date, while shares of Canadian Pacific have climbed almost 10 percent.

The boards of both companies have unanimously approved the cash-and-stock deal, which is expected to close by the middle of 2022, subject to customary approvals.

The railroad industry can be viewed as a bellwether of industrial activity; it expects to benefit from a growing U.S. economy as it emerges from the pandemic. The Federal Reserve has signaled optimism for the nation’s economic outlook, and President Biden signed a $1.9 trillion spending bill into law this month.

in his annual letter.

The railroad executives on Sunday highlighted other opportunities they see in the deal. Mr. Creel called the merger a “compelling opportunity to take trucks off the road” at a time when the United States is focused on a transition to a greener economy. It also reduces risks in the global supply chain after a pandemic that highlighted its weaknesses, Mr. Ottensmeyer said.

The deal needs approval from the Surface Transportation Board, a division of the Department of Transportation, which has previously acknowledged concerns that railroad consolidation has led to service issues for shippers. Canadian Pacific’s past efforts to acquire U.S. railroads have failed, in part because of such concerns. That includes talks with CSX Corporation in 2014 and Norfolk Southern in 2016. And the Biden administration has already signaled a tougher stance on antitrust scrutiny.

Because of its size, Kansas City Southern is exempt from guidelines put in place in 2001 to tighten deal scrutiny in the industry. The combined company would still be the smallest of the remaining six largest freight railroads operating in the United States. The two railroads have no overlap, Mr. Creel and Mr. Ottensmeyer said — and, in some cases, the transaction will create new markets.

“There’s zero other deals that represent the uniqueness of this deal,” Mr. Creel said.

ROSWELL, Ga.--(BUSINESS WIRE)--Berkshire Hathaway HomeServices Georgia Properties, one of the largest and most successful real estate organizations in … END_OF_DOCUMENT_TOKEN_TO_BE_REPLACED

The real estate market seems to have a split personality.On the positive side for homebuyers, the number of properties for sale shot up by a … END_OF_DOCUMENT_TOKEN_TO_BE_REPLACED

Kim Tae-Ri plays a gun-toting time traveler in 'Alienoid.' Well Go USA Director Choi Dong-hoon likes a challenge. That much is apparent in his latest … END_OF_DOCUMENT_TOKEN_TO_BE_REPLACED