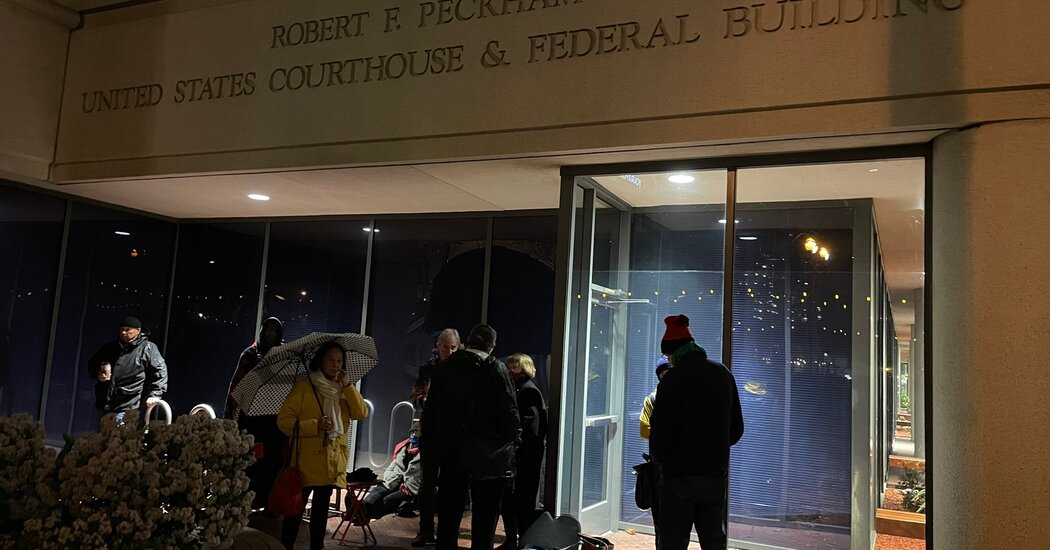 During the third month of the fraud trial of Elizabeth Holmes, the founder of the blood testing start-up Theranos, Judge Edward J. Davila, who is presiding, called the proceedings “a movable feast.”

We were about as far away from Hemingway’s Paris as I could fathom. The judge was most likely not talking about eating and drinking his way through 1920s France; the phrase “movable feast” also describes an event with a flexible date. But the image put the lack of glamour of covering this trial into relief.

Reporting on the tech industry and its immense wealth and power sometimes affords a glimpse into opulence: a dinner at a European palace, for example, or a crypto yacht party. But during this trial, I spent much of my time sitting on the carpeted floor of the courtroom’s hallway, downing snack bars and writing stories on my laptop.

Four months of covering Elizabeth Holmes’s fraud trial, now in its second week of jury deliberations, has turned me into a nocturnal, sidewalk-dwelling human-shaped snack bar.

Jury deliberations are underway in the fraud trial of Elizabeth Holmes, the founder of the blood testing start-up Theranos.

One morning outside the courthouse, a group of spectators pretended to sell black turtlenecks — Ms. Holmes’s uniform during Theranos’s rise — as a bit of performance art. They were scolded by court security guards for soliciting on federal property. Another time a woman yelled “You’re a good mom!” to Ms. Holmes as she entered the building. She was scolded by Judge Davila for potentially influencing the jury, whose members use the same door as the public.

Snagging a seat means getting there early. Each day since Ms. Holmes took the stand in late November, I jolt out of my hotel bed around 3 a.m. in a panic. I get ready, then hustle past a San Jose Christmas market that, just hours earlier, was buzzing with lights, people and festivities.

Then I join the group of journalists and spectators gathering outside the courthouse to receive a number, denoting our place in line — entry into the courtroom is first come first served — and sit on the cold sidewalk in the dark, waiting for 5 a.m., when the nearby Starbucks opens. Around 6:20 a.m., the gates to the courthouse unlock and we form a proper line. Around 8 a.m., Ms. Holmes arrives. An hour after that, I take my seat in the courtroom. (A few times, I’ve been relegated to a small overflow room, which also fills up fast.)

prompted the judge to warn journalists to type quietly.) There were tarot cards on one day and a panettone on another. The most critical gear is snacks.

When court is in session I sit in the gallery, hunched over my laptop, barely moving except for my fingers. But my brain is in five places at once, tap-dancing, spinning, back-flipping, walking a tightrope and doing the worm. I’m trying to take fast and accurate notes (quietly) while also sending instant messages to my Times editor, Pui-Wing Tam, (quietly), sending tweets (quietly), posting live updates on the trial for The Times (quietly), emailing outside sources for quotes (quietly) and writing my story in time for our East Coast deadline.

Not every day in court has been as newsworthy as when the defendant took the stand, so our coverage ranges from high-level weekly summaries to minute-by-minute live updates. Big witnesses, like James Mattis, a Theranos board member and former defense secretary, get their own story, as do big themes, like Theranos’s use of the media or the lack of investor due diligence. Our reporting fellow, Erin Woo, has been critical to our coverage. We write background summaries in advance so we can file quickly after adding quotes and analysis from the day’s events.

There are no windows in the courtroom, and by the time we leave the building more than 12 hours after arriving, the sun is going down. Then we do it all again.

AUSTIN, Texas--(BUSINESS WIRE)--As the first multifamily management company to be recognized in the Public Relations and Marketing Excellence Awards, … END_OF_DOCUMENT_TOKEN_TO_BE_REPLACED

There have been whispers of cooling housing and rental prices in the San Francisco Bay Area, but that hasn't yet translated into practical, noticeable … END_OF_DOCUMENT_TOKEN_TO_BE_REPLACED

Cars pass in Independence Square at twilight in Kyiv, Ukraine, Monday, Oct. 31, 2022. Rolling ... [+] blackouts are increasing across Ukraine as the … END_OF_DOCUMENT_TOKEN_TO_BE_REPLACED