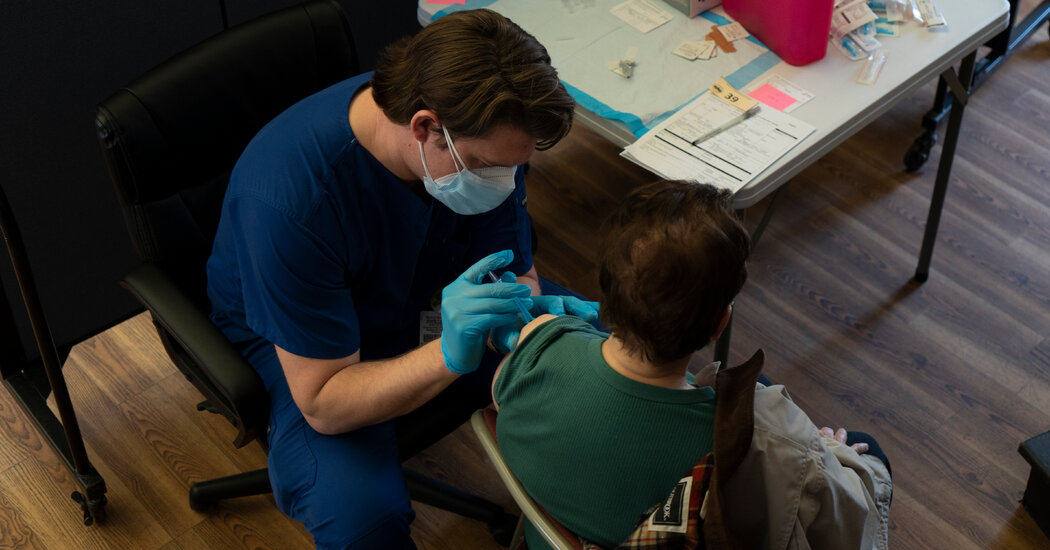 WASHINGTON — The global economy is rebounding from the coronavirus pandemic faster than previously expected, largely thanks to the strength of the United States. But the International Monetary Fund warned on Tuesday that an uneven rollout of vaccines posed a threat to the recovery, as the fortunes of rich and poor countries diverge.

The global dynamic echoes the “K-shaped” recoveries that are playing out worldwide. While many wealthy nations are poised for a major economic expansion this year, other nations’ struggles could reverse decades of progress in fighting poverty. Top international economic officials warned this week that this divergence, which is being amplified by sluggish deployment of vaccines in developing countries, is a threat to stability and long-term growth.

“Economic fortunes within countries and across countries are diverging dangerously,” Kristalina Georgieva, managing director of the I.M.F., said at a panel discussion on Tuesday during the annual spring meetings of the fund and the World Bank.

This week, Treasury Secretary Janet L. Yellen emphasized that point, saying in a speech that the inability of low- and middle-income countries to invest in robust inoculation programs could result in “a deeper and longer-lasting crisis, with mounting problems of indebtedness, more entrenched poverty and growing inequality.”

upgrading its global growth forecast for the year thanks to vaccinations of hundreds of millions of people, efforts that are expected to help fuel a sharp economic rebound. It now expects the global economy to expand by 6 percent this year, up from its previous projection of 5.5 percent, after a contraction of 3.3 percent in 2020.

But within advanced economies, low-skilled workers have been hit the hardest and those who lost jobs could find it difficult to replace them. And low-income countries are facing bigger losses in economic output than advanced economies, reversing gains in poverty reduction and risking long-lasting pandemic-era scars.

Emerging market economies in many cases have fewer resources for fiscal stimulus, vaccine investments and labor force retraining — factors that put them at risk of falling behind and getting stuck as the world starts its rebound.

Researchers at the I.M.F. pointed out in a recent blog post that it was important that rates on U.S. debt are rising because of a strengthening economic outlook, one that will benefit many economies by stoking demand for their exports. Still, “countries that export less to the United States yet rely more on external borrowing could feel financial market stress.”

Most U.S. officials have focused on how stronger domestic growth could actually help the rest of the world as American consumers buy foreign goods and services. “This year the U.S. looks like it’s going to be a locomotive for the global economy,” Richard H. Clarida, the vice chair of the Fed, said during a recent speech.

Ms. Yellen made a similar argument on Tuesday during a panel discussion at the I.M.F., at which she urged countries not to let up on fiscal support.

“Stronger growth in the U.S. is going to spill over positively to the entire global outlook and we are going to be careful to learn the lessons of the financial crisis, which is ‘don’t withdraw support too quickly,’” she said.

There are risks that spillovers could work the other way — slower vaccination progress abroad could come to weigh on American and global improvement. While roughly 500 doses of the vaccine have been administered per 1,000 people in the United States, based on New York Times vaccination data, that number is about 1 per 1,000 in Mali and Afghanistan.

“There’s a race right now between these variants of concern and vaccines,” she said during a webcast event Tuesday. She urged “global cooperation and attention” to how disparities in vaccine distribution affect inequality and economic recoveries.

The I.M.F. agrees. Vitor Gaspar, the fund’s director of fiscal affairs, said that advanced economies would continue to be at risk even if the virus were raging in developing countries that are not major economic powers, noting that the virus cannot be eradicated anywhere until it is eradicated everywhere. For that reason, he said, investing in vaccinations is critical.

“Global vaccination is probably the global public investment with the highest return ever considered,” Mr. Gaspar said in an interview. “Vaccination policy is economic policy.”

While global policy bodies are warning about diverging growth and public health outcomes, some Wall Street economists have taken a more optimistic tone.

“We think market participants underestimate the likely pace of improvement in both the public health situation and economic activity in the remainder of 2021,” Jan Hatzius at Goldman Sachs wrote in an April 5 research note.

Vaccinations are high or progressing in Canada, Australia, Britain and the euro area. In emerging markets, Mr. Hatzius wrote, Goldman economists expect 60 to 70 percent of the population to have “at least some immunity” by the end of the year when counting prior coronavirus infection and vaccine proliferation.

“The laggards are China and other Asian countries, although this is mainly because Asia has been so successful in virus control,” he wrote.

How fast global recoveries proceed could be critical to the policy outlook, both in government support spending and in central bank monetary help.

From the Fed to the European Central Bank and Bank of Japan, monetary authorities have employed a mix of rock-bottom rates, huge bond purchases and other emergency settings to try to cushion the pandemic’s fallout.

Organizing bodies have echoed Ms. Yellen’s comment: They argue that it’s important to see the recovery through, rather than pulling back on economic help early.

Global policymakers “generally view the risks to financial stability associated with early withdrawal of support measures as currently greater than those associated with a late withdrawal,” Randal K. Quarles, the Federal Reserve’s vice chair for supervision and head of the global Financial Stability Board, said in a letter released Tuesday.

The I.M.F. said on Tuesday that it was keeping a close eye on interest rates in the United States, which could pose financial risks if the Fed raises them unexpectedly. It also urged countries to maintain targeted fiscal support — and to be ready to provide more if future waves of the virus emerge.

“For all countries, we’re not out of the woods, and the pandemic is not over,” said Gita Gopinath, the I.M.F.’s chief economist.

AUSTIN, Texas--(BUSINESS WIRE)--As the first multifamily management company to be recognized in the Public Relations and Marketing Excellence Awards, … END_OF_DOCUMENT_TOKEN_TO_BE_REPLACED

There have been whispers of cooling housing and rental prices in the San Francisco Bay Area, but that hasn't yet translated into practical, noticeable … END_OF_DOCUMENT_TOKEN_TO_BE_REPLACED

Cars pass in Independence Square at twilight in Kyiv, Ukraine, Monday, Oct. 31, 2022. Rolling ... [+] blackouts are increasing across Ukraine as the … END_OF_DOCUMENT_TOKEN_TO_BE_REPLACED