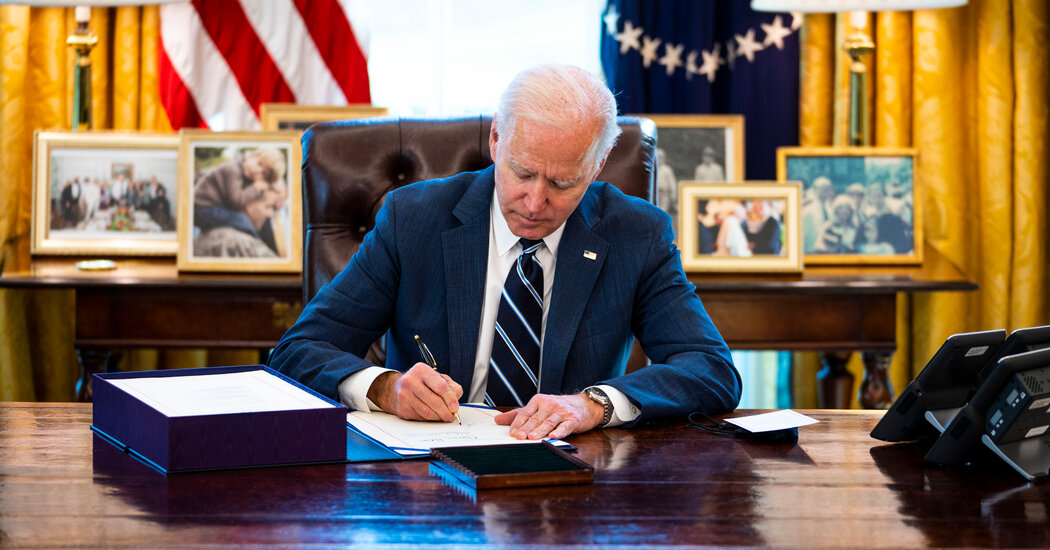 WASHINGTON — A last-minute change in the $1.9 trillion economic relief package that President Biden signed into law this week includes a provision that could temporarily prevent states that receive government aid from turning around and cutting taxes.

The restriction, which was added by Senate Democrats, is intended to ensure that states use federal funds to keep their local economies humming and avoid drastic budget cuts and not simply use the money to subsidize tax cuts. But the provision is causing alarm among some local officials, primarily Republicans, who see the move as federal overreach and fear conditions attached to the money will impede upon their ability to manage their budgets as they see fit.

Officials are scrambling to understand what strings are attached to the $220 billion that is expected to be parceled out among states, territories and tribes and are already pressing the Treasury Department for guidance about the restrictions they will face if they take federal money.

Under the new law, $25 billion will be divided equally among states, while $169 billion will be allocated based on a state’s unemployment rate. States can use the money for pandemic-related costs, offsetting lost revenues to provide essential government services, and for water, sewer and broadband infrastructure projects.

based on a formula that considers its unemployment rate rather than its population. Conservative-leaning states, many of which had less onerous coronavirus restrictions and did not shut down as much business activity, claim they are essentially being penalized for prioritizing their economies during the pandemic.

But early analyses of the bill show that both conservative-leaning and liberal-leaning states will receive big chunks of cash. California, Florida, New York and Texas will each get more than $10 billion in aid, according to a Tax Foundation tally.

Still, the tax language has angered Republicans — none of whom voted for the rescue package — and on Thursday, Senator Mike Braun, Republican of Indiana, introduced legislation to reverse it.

many cities are facing budget crunches, state finances have turned out to be relatively healthy.

A New York Times analysis this month found that, on balance, state revenues were generally flat or down slightly last year compared with 2019 as expanded unemployment benefits allowed consumer spending and tax revenues to keep flowing.

“Idaho would potentially subsidize poorly managed states simply because we are using our record budget surplus to pursue historic tax relief for our citizens,” Gov. Brad Little of Idaho said this week. “We achieved our record budget surplus after years of responsible, conservative governing and quick action during the pandemic, and our surplus should be returned to Idahoans as I proposed.”

Gov. Jim Justice, a Republican of West Virginia, criticized Mr. Manchin in an interview this week with CNN.

“He’s hurting his own people in the state of West Virginia,” Mr. Justice said. “I do not condone it.”

The provision is also raising questions about what actually constitutes a tax cut and whether the law could prevent states from other types of tax relief. The language of the legislation appears to offer states little wiggle room.

Jared Walczak, the vice president for state projects at the Tax Foundation’s Center for State Tax Policy, said that the fine print in the law raised many complicated questions for states that, in some cases, would be awarded money for things that they either do not need or that they already had plans to pay for out of their budgets. It is not clear, for example, if a state could use aid money for an expense related to the coronavirus that it was already planning to pay for and then offer tax credits with the additional surplus.

“If the federal government intends to forbid any sort of revenue negative tax policy, no matter what its size, because a state received some funding, that would be a radical federal entanglement in state fiscal policy that may go beyond what was intended,” Mr. Walczak said.

Such questions will largely hinge on how Treasury Secretary Janet L. Yellen interprets the legislation and what guidance the Treasury Department gives to states.

A department official noted that the law says that states and territories that receive the aid cannot use the funds to offset a reduction in net tax revenue as a result of tax cuts because the money is intended to be used to support the public health response and avoid layoffs and cuts to public services. More guidance on the matter is coming, the official said.

The lack of clarity also raises the risk that states use the money for projects or programs that do not actually qualify under the law and then are forced to repay the federal government. States are required to submit regular reports to the Treasury Department accounting for how the funds are being spent and to show any other changes that they have made to their tax codes. The department will also be setting up a system of monitoring how the funds are being used.

Emily Swenson Brock, the director of the Federal Liaison Center at the Government Finance Officers Association, said that the eligible uses of the federal aid appeared to be relatively limited for the states and that some might actually find it challenging to deploy the money in a useful way.

“It’s complicated here for the states,” Ms. Brock said, adding that her organization had asked the Treasury Department for an explanation. “Congress is reaching in and telling these states how they can and can’t use that money.”

Before they receive federal funds, states will have to submit a certification promising to use the money according to the law. They could also decline funding or, if they are set on tax cuts, they could offset them with other sources of revenue that do not include the federal funds.

For many states, the federal money is welcome even if they do not necessarily need it for public health purposes.

Melissa Hortman, the speaker of the Minnesota House of Representatives, said that she was hopeful that the federal government gives states the flexibility to use the money to make up for lost revenue from the virus. She suggested that the state should look to make new investments in education and transportation. Minnesota is expected to have a budget surplus for the next two years and will receive more than $2 billion in aid.

“It’s not too much money,” said Ms. Hortman, a Democrat. “Our country has just lived through a once-in-a-hundred-year pandemic.”

SAN FRANCISCO — Cleve Jones has lived in the Castro neighborhood for nearly 50 years, almost from the day he graduated from high school in Phoenix and … END_OF_DOCUMENT_TOKEN_TO_BE_REPLACED

A home inspection can spare you from unpleasant surprises after you buy. After crunching the numbers, searching your favorite neighborhoods, and … END_OF_DOCUMENT_TOKEN_TO_BE_REPLACED