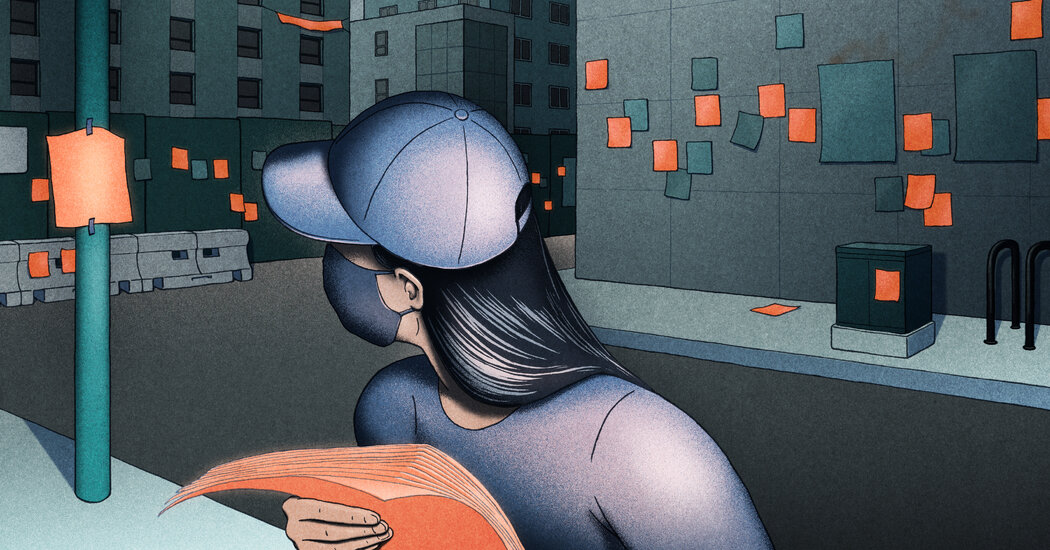 “I thought to myself that there are many Chinese who also want freedom and democracy,” she said. “But where are you? Where can I find you? If we meet on the street, how can we recognize each other?”

At about 4 the next morning, she went downstairs from her dorm room to print some posters. She was nervous about running into other Chinese students, most of whom she would describe as “little pinks,” or pro-Beijing youths. She wore a mask to avoid cameras, even though she had seldom worn one since arriving in London a few weeks ago.

She was even more nervous putting up the posters on campus. Every time she saw an East Asian face, she would run to hide in a corridor or a restroom. She was afraid they could report her to the embassy or post photos of her on social media. Her parents are still in China, so she needs to take their safety into account.

After putting up the posters all over her campus, she felt much more at peace with herself.

A week later, when a new chat group titled “‘My Duty’ Democracy Wall in London” was set up on the messaging app Telegram, Kathy was one of the first to join. Within a day, more than 200 Chinese had also signed up. By Sunday, four days later, there were more than 400 members. Most introduced themselves as students and professionals in the U.K. Many said they had joined to find like-minded people because they, like Kathy, didn’t know whom to trust and felt lonely and powerless.

Citizens Daily CN, the Instagram account, organized Telegram chat groups in London, New York, Toronto and two other places to provide a safe online space for overseas Chinese to exchange views. Most people use online handles that disguise their identity.

They have discussed the depths of their frustration with political apathy and the best way to deal with pro-Beijing youth. Quite a few admitted that they were once nationalistic themselves, but added that China’s harsh zero-Covid policy had made them realize the importance of having a government accountable to its people. More important, they discussed what further actions they could take.

On Sunday, Kathy, who is in her early 20s, joined a demonstration for the first time in her life. For safety, she wore a mask and sunglasses, even though it was dark when the protest reached the Chinese Embassy in London. A young Chinese woman started chanting slogans made popular by the Bridge Man: “Students, workers, let’s strike. Depose the despotic traitor Xi Jinping.”

AUSTIN, Texas--(BUSINESS WIRE)--As the first multifamily management company to be recognized in the Public Relations and Marketing Excellence Awards, … END_OF_DOCUMENT_TOKEN_TO_BE_REPLACED

There have been whispers of cooling housing and rental prices in the San Francisco Bay Area, but that hasn't yet translated into practical, noticeable … END_OF_DOCUMENT_TOKEN_TO_BE_REPLACED

Cars pass in Independence Square at twilight in Kyiv, Ukraine, Monday, Oct. 31, 2022. Rolling ... [+] blackouts are increasing across Ukraine as the … END_OF_DOCUMENT_TOKEN_TO_BE_REPLACED