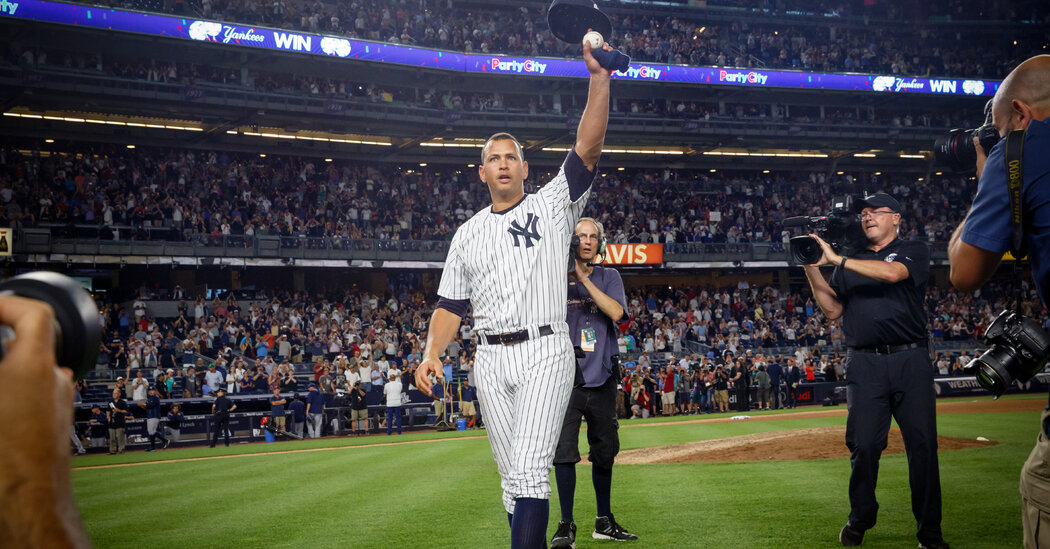 Professional athletes can sell almost anything, from soda to sneakers to car insurance. But lately they’ve used their star power to sell SPACs, the blank-check acquisition vehicles that have raised more than $90 billion this year. Amid frenzied competition for merger deals, about a fifth of SPACs launched since last year have brought athletes on board in hopes of standing out when pitching to start-ups they hope to take public, Matthew Goldstein and DealBook’s Lauren Hirsch report.

Alex Rodriguez is one of the highest-profile athletes in the SPAC business, and he stands out because unlike many of his peers merely adding their names to someone else’s SPAC, he founded his own. Slam Corp, established by the former baseball slugger and the hedge fund manager Himanshu Gulati, has met with more than 70 potential targets since it raised $500 million in a February I.P.O. Mr. Rodriguez could sit on the board of whatever company it acquires. He and his business partner spoke with Lauren about their plans — below are exclusive excerpts from their conversation.

On running a public company …

Mr. Rodriguez formed the investment firm A-Rod Corp in 1996, but a listed company brings a new set of responsibilities. Is he ready?

“I think you do it collectively, you do it with the team,” said Mr. Rodriguez, pointing to his frequent communication with Mr. Gulati. And when it comes to understanding the fiduciary duties involved, he said that his long career at the Yankees brought him experience at “the ultimate public company,” where the shareholders, so to speak, were the outspoken fans of the storied franchise.

$1.7 billion bid for the Mets lost out to Steve Cohen’s $2.4 billion offer. “The silver lining for me is the trust that people put on us, and that doesn’t go to waste just because you didn’t win,” Mr. Rodriguez said, referring to himself and the pop star Jennifer Lopez, who joined him on the bid. “I think that’s something that brings tremendous credibility.”

On the S.E.C.’s warning about SPACs pitched by celebrities …

The U.S. securities regulator recently told investors not to buy shares of a SPAC simply because boldface names are attached to it. Many SPACs bring celebrities on as directors or advisers, Mr. Gulati said, and “they’re just there to kind of help them raise capital.” At Slam Corp, he said, “Alex is the C.E.O. — what he’s done at A-Rod Corp should not be understated.”

“I just want to stand up for the athlete community, because there’s so many smart young men and women. I would be lucky to have them as partners,” Mr. Rodriguez said. “We have a reach, and it’s not just domestic, it’s global,” he said, in reference to himself and Ms. Lopez.

WeWork is going public via a SPAC. The office sharing company agreed to a deal with the blank-check company BowX Acquisition that values WeWork at $9 billion. That’s less than a quarter of its valuation in 2019. The venture firm behind the SPAC counts Shaquille O’Neal as an adviser.

struggling to free the container ship that has been wedged in the vital waterway since Tuesday, creating a huge, costly traffic jam that exposes the world economy’s reliance on just-in-time supply chains.

Lawmakers get few direct answers when grilling tech C.E.O.s. At the five-hour hearing on disinformation, Twitter’s Jack Dorsey acknowledged that his platform bore some responsibility for the Jan. 6 Capitol riot, while Facebook’s Mark Zuckerberg and Google’s Sundar Pichai disagreed on whether regulatory changes were needed. Lawmakers were unimpressed: “There’s a lot of smugness among you,” said one.

Chinese consumers boycott several foreign brands. H&M, Nike, Adidas and others face retaliation from shoppers — egged on by the Communist Party — after they joined calls to avoid using cotton produced in the Xinjiang region, where Beijing has waged a repression campaign against ethnic minorities. Shares in Chinese apparel brands with ties to Xinjiang have rallied.

Banks can resume buybacks and raise dividends this summer. After the Fed’s next round of stress tests ends in June, most institutions will be allowed to resume share repurchases and increase dividends that were frozen during the pandemic, assuming they have sufficient capital.

A TV debut (on the public markets)

Over its nearly 20-year history, Vizio has become one of the biggest names in flat-screen TVs. But as it began life as a publicly listed company yesterday, its founder and C.E.O., William Wang, was eager to convince investors that its biggest business is in streaming on its smart TVs.

Lockdowns were good for Vizio. With people stuck at home and movie theaters closed, TVs have been in high demand: The company shipped 7.1 million units last year, up 20 percent from 2019. More important from Vizio’s perspective, it saw a 60 percent increase in accounts for SmartCast, its platform for connecting to streaming services like Apple+ and Netflix. “I think the biggest impact of the pandemic is forcing people to look at home entertainment again,” Mr. Wang told DealBook.

paid $2.2 million to settle charges that it collected and sold users’ data without their knowledge or consent. It doesn’t offer every streaming service — it’s missing HBO Max, for example — and faces competition from Roku, Apple TV and other smart TV makers.

The time was right for an I.P.O. Vizio tried to go public in 2015, but called it off after agreeing to sell itself to a Chinese rival (only for that deal to fall apart). Now that it makes money from both TV sales and streaming, Mr. Wang said, Vizio is more attractive to public-market investors. That said, the I.P.O. priced at the low end of its expected range, and fell 9 percent in the first day of trading. The C.E.O. put a positive spin on it: “We’re probably the leader in the space in consumer electronics. I believe sooner or later people will appreciate that.”

Some of the academic research that caught our eye this week, summarized in one sentence:

The Lost Art of Connecting: The Gather, Ask, Do Method for Building Meaningful Business Relationships,” which was published by McGraw-Hill Education this week.

Ms. McPherson spoke to DealBook about making connections during a pandemic that has physically estranged so many. The interview has been edited and condensed for clarity.

DealBook: Has your view of technology changed?

Ms. McPherson: The past year helped us all understand how much we miss human connection when we don’t have it. Some days I‘ve showed up at a team meeting and a part of me just felt like crying. So I’ve learned to expose more of that vulnerability and how to be more empathetic and compassionate online, which freed up my team, too. Now, I think we can be better stewards of technology and make those deep connections if we’re intentional about it.

A detail of Janssen Johnson & Johnson COVID-19 vaccine that is not currently being given out because it has been put on hold.Allen J. Schaben | … END_OF_DOCUMENT_TOKEN_TO_BE_REPLACED