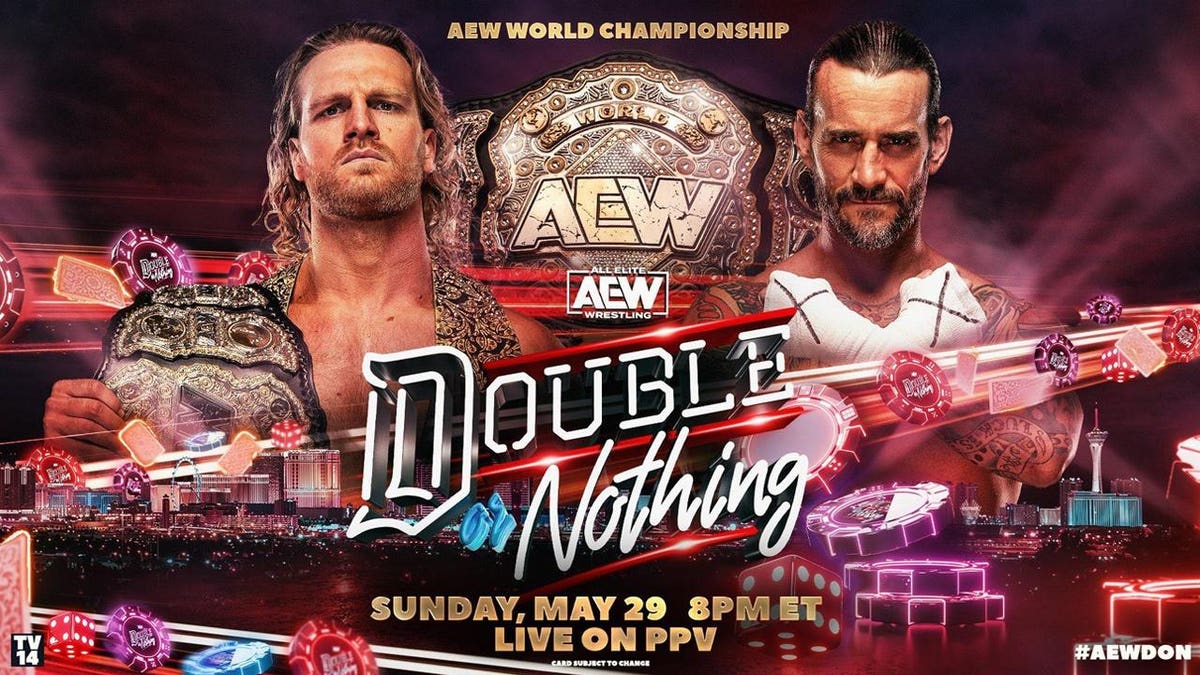 CM Punk won the AEW Championship over “Hangman” Adam Page at AEW Double or Nothing 2022. Punk defeated Page after Page had a “crisis of conscious,” contemplating using the AEW World Championship as a weapon before discarding the title. The hesitation cost Page, who lost clean to a GT S.

AEW Double or Nothing was filled with fireworks hours before it even took the air.

MJF no-showed an AEW meet and greet 24 hours before the show, setting off a chain of reactions that gave way to every rumor from MJF no-showing Double or Nothing, Wardlow challenging for the AEW World Championship or even a surprise match against Goldberg.

AEW Double or Nothing 2022 Match Card

AEW Double or Nothing 2022 Ticket Sales

Chants during this match included:

The Hardys def. The Young Bucks

Fans chanted “Brandon Cutler,” and The Young Bucks got massive heat after shoving Cutler for stealing their spotlight.

I was shocked that The Young Bucks lost clean to the Hardys. Between Jurassic Express losing tonight and the Hardys possibly winning the titles in the near future, AEW might be playing hot potato with the AEW World Tag Team Titles.

Fans were really behind Jade Cargill, who received a babyface reaction from her entrance to the finish.

This match received a boost of energy when The Baddies and Smart Mark Sterling interfered. It started to veer into cartoon territory once John Silver ran out.

There were a couple impressive nearfalls in this match even though everybody in the building expected Jade Cargill to retain.

The House of Black vs. Death Triangle

Not only did PAC wear a mask, but Death Triangle was accompanied by a child dressed as Penta El Zero M.

All three members of the House of Black were facepaint, which made them look like homeless mimes.

Fans were really into this one, which made good use of their abundance of (read: wasted) talent.

There were chants for referee Mike Chioda throughout this match as fans showed signs of restlessness.

After outside interference, this match mercifully—and awkwardly—ended as Adam Cole delivered the Boom. Cole’s win might bode well for his girlfriend Britt Baker going over Ruby Soho.

Fans quickly defaulted to being split.

Ruby Soho had a helluva time putting on a sharpshooter as she struggled to keep her balance and lock it in.

The crowd had definitely hit a wall to this point in the show, but Ruby Soho and Britt Baker got them toward the end.

After some remarks from Martha Hart, Adam Cole and Britt Baker were awarded with beautiful new championships.

Sammy Guevara and Tay Conti walked out with gear inspired by Maleficent.

The announce team struggled to explain this feud and the stipulation of this match. This feud has been a complete cluster.

Sammy Guevara and Tay Conti remained heels as they had communication issues with Frankie Kazarian. Each team was comprised of two babyfaces and one heel.

Fans were into Paige Vanzant’s debut. It definitely wasn’t perfect, but she’ll be just fine as a wrestler.

Frankie Kazarian spent half this match calling Sammy Guevara a “stupid son of a b—h.”

There was a scary botch where Darby Allin tripped on the bottom rope before pinwheeling into Kyle O’Reilly.

Of all matches, this match brought the crowd back through a combination of stiff strikes and near-disaster dives from Darby Allin.

Thunder Rosa and Serena Deeb got a lot of time and worked hard. The match did get sloppy in spots, but they kept the crowd throughout, which sent from respectful to heated for the finish.

Justin Roberts hilariously started the festivities by announcing: “Ladies and gentlemen…shit’s about to hit the fan…”

The “Wild Thing” music didn’t shut off once this match started. It even restarted once it ended. Finally, Jericho put a permanent end to the music by pulling the sound chord.

This was every bit the cluster that I thought it it would be, but they mostly pulled it off. The match got better the closer they got to the ring. Jim Ross accurately called this an “ugly classic.”

This match was very fast-paced and everybody got a chance to shine. Nobody shined brighter than Ricky Starks.

There were too many shots of Christian throughout this match for there not to be a heel turn.

It took just about every babyface in this match to take Powerhouse Hobbs off his feet.

The crowd was split down the middle throughout this match.

Hangman Adam Page sold his knee during the second-half of the match, which really made this seem like it could go either way.

Poor CM Punk slipped on two different attempts at the Buckshot Lariat and got booed as a result. Punk was later booed after appearing late to kicking out of the Deadeye.

Hangman Adam Page contemplated a heel turn, but ultimately did the right thing. The hesitation cost him however, as CM Punk is the new AEW world champion.

An affordable center-chimney Colonial in Glastonbury, CT, is the oldest property to hit the market this week on Realtor.com®.Offered at a steep … END_OF_DOCUMENT_TOKEN_TO_BE_REPLACED

Nissan was one of the early pioneers of the electric car. The Leaf has now sold over 600,000 units worldwide since its launch in 2011 and is still … END_OF_DOCUMENT_TOKEN_TO_BE_REPLACED

RUDNE, Ukraine — Yurii Brukhal, an electrician by trade, didn’t have a very dangerous role when he volunteered for Ukraine’s territorial defense … END_OF_DOCUMENT_TOKEN_TO_BE_REPLACED