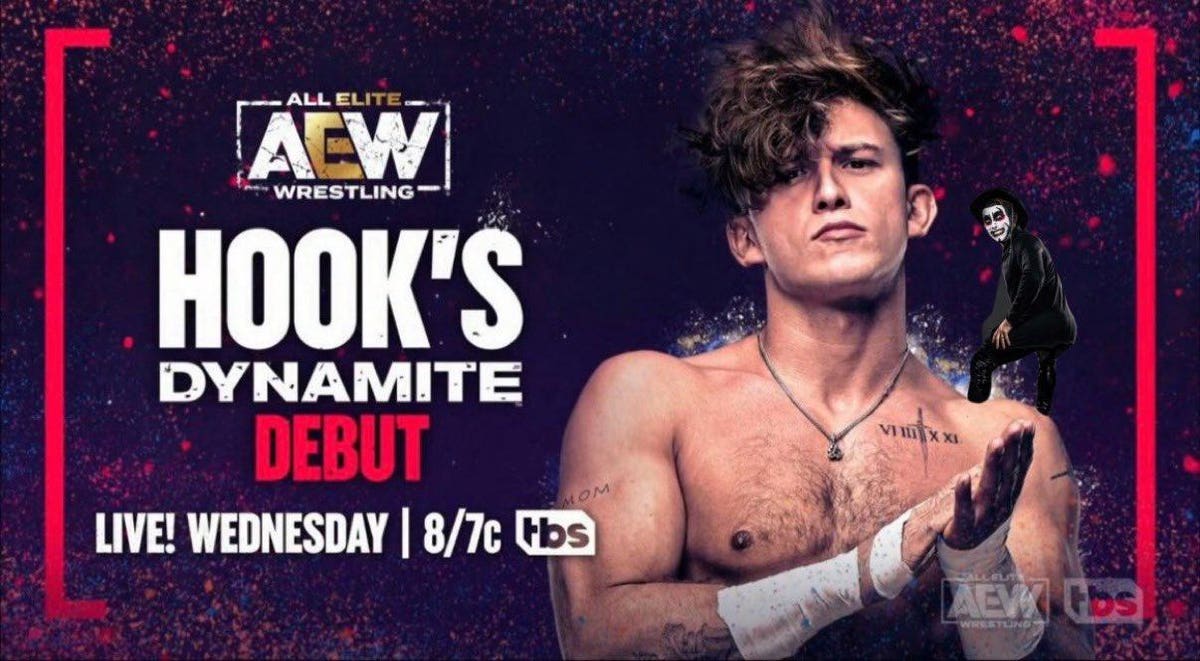 AEW Dynamite featured Tony Khan’s big announcement, which is a Forbidden Door event on Sunday, June 26. Tickets for the supershow go on sale Friday, May 6, 2022. Khan’s announcement, as expected, will make a lot of hardcore fans happy as New Japan Pro Wrestling’ brand has taken a hit domestically amid staunch restrictions at New Japan Pro Wrestling shows that continue to this day.

Dustin Rhodes tried a very risky Cross Rhodes, and rushed to the next spot before the crowd even had a chance to chant “Cody.”

Punk vs. Hangman didn’t feel like that big of a match on paper, but all I needed to see was the visual of CM Punk and Hangman Adam Page, and the subsequent crowd reaction, and now I’m all in.

CM Punk continued to paid homage to Bret Hart, not only with his pink and black gear, but also with the finish where he beat Rhodes with a cradle pin a la British Bulldog vs. Bret Hart at SummerSlam 1992.

Wheeler Yuta’s blood-stained Blackpool Combat Club tights are such an improvement over his old gear. He looks more like Ricky Steamboat than ever.

For the second straight week, a Black man was the most popular star in a crowded ring. After Ricky Starks’ homecoming in New Orleans last week, this Pittsburgh crowd gave Lee Moriarty a hero’s welcome.

The more this be came a high-flying match to fit the styles of Lee Moriarty and Dante Martin, the more exciting this match became.

Tony Khan Announces AEW vs. NJPW in “The Forbidden Door”

These fans gave a very warm response to Tony Khan, chanting wildly for him.

Tony Khan didn’t make this announcement about himself. He didn’t even make the announcement. The segment immediately threw to Adam Cole, who announce the AEW vs. New Japan Pro Wrestling “Forbidden Door” event.

Jay Light came out to tease a Bullet Club-Undisputed Elite alliance. I feel like this announcement would have been so much bigger pre-pandemic. It’ll excite an audience who already watches AEW, but it will not grow that audience.

MJF made Wardlow walk out to no music, but I thought that was polite for MJF, who I expected to make Wardlow walk to the ring to pig noises.

As soon as Tony Schiavone and Excalibur said The Butcher was “not here to win a match,” it made me think this could be a rare disqualification.

The Butcher may have legitimately screwed up a power bomb, but it really played into the story of this match of Wardlow being the master of the power bomb.

Why doesn’t MJF just instruct Wardlow to lay his shoulders down on the mat?

This match was the quintessential “professional wrestling” technical showcase. The commentary was filled with words like “fundamental” and the match was a real buzz kill on 4:20.

What this match had in “professional wrestling,” it lacked in charisma.

Kyle O’Reilly pulled off the victory and will advance to the tournament and I’m shocked. After the match, Christian came out to console Jungle Boy, so maybe a Jungle Boy feud with Christian is the long-term plan.

Hook was very popular with this crowd and did a good job milkng them for their reactions.

Danhausen appeared ringside and Hook became one of the first babyfaces in the history of modern wrestling to be unbothered by a ringside distraction and just go about his business the way any professional should.

This crowd popped huge for a potential Hook vs. Danhausen match.

Scorpio Sky cut a very good promo on Sammy Guevara, and Ethan Page followed up with a spirited great promo. Dan Lambert closed things out and cut an incredible promo.

Sammy Guevara and Tay Conti got so much heat every time their lips came even close to touching. No surprise there.

Britt Baker’s homecoming featured Steelers fantasy football studs Najee Harris and Pat Freiermuth. In addition to the Pittsburgh tie-in, she’s even more of a babyface because she walked out with two players who won a lot of fantasy football leagues.

Baker sounded blown up in her post-match promo after several weeks away from the ring. Baker called out Toni Storm, Ruby Soho, Jade Cargill and Red Velvet in a solid, but not perfect, post-match promo.

There was an excellent sequence where Sting was in a disguise before revealing himself and helping Allin in a brawl.

All Darby Allin and Andrade dl Idolo do is have awesome matches. I’d much rather see a match between the two with not as much plunder, but this was certainly a crowd-pleaser.

The Hardys appeared after the match, and Jeff Hardy curiously sold his shoulder while doing a “delete” chant.

Daniel Acker | Bloomberg | Getty ImagesHome prices are softening in most markets across the nation.Yet home prices are still higher compared with a … END_OF_DOCUMENT_TOKEN_TO_BE_REPLACED

Joel Silver has been responsible for some of Hollywood's biggest franchises, including "The Matrix," "Die Hard," "Predator," and "Lethal Weapon."So … END_OF_DOCUMENT_TOKEN_TO_BE_REPLACED