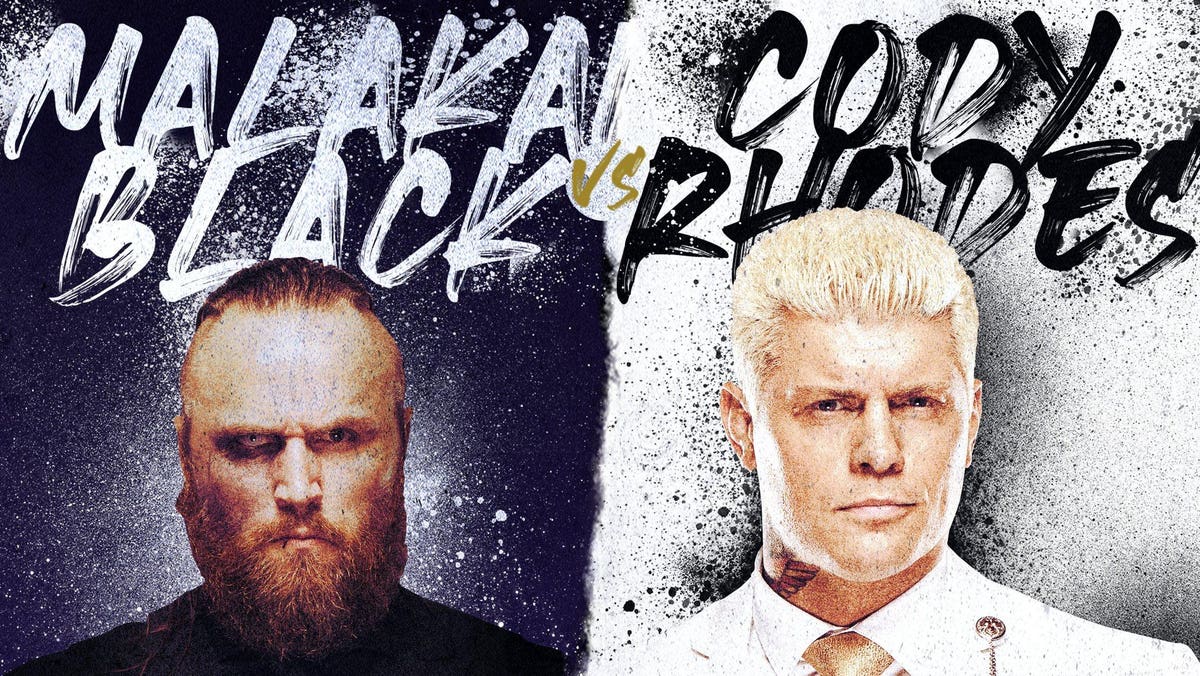 Cody Rhodes teased retirement at the end of AEW Dynamite Homecoming after suffering a one-sided loss to the debuting Malakai Black. After taking a wild table bump, Black hit a Black Mass on Rhodes before pinning him with one foot on his chest.

Rhodes proceeded to cut a great promo about AEW’s success against all odds, referring to the promotion as “competition” to WWE instead of an alternative. As Rhodes—who even acknowledged rumors of infighting among fellow Executive Vice Presidents The Young Bucks and Kenny Omega—prepared to leave both his boots in the ring, Black returned and hit Rhodes with a crutch before AEW Dynamite went off the air.

In addition to Rhodes vs. Black, AEW Dynamite Homecoming advertised Chris Jericho vs. Juventud Guerrera in the third of Five Labours of Jericho and Miro vs. Lee Johnson in a TNT Championship match.

Last weeks broadcast of AEW Fight for the Fallen marked Dynamite’s historic third straight week as the No. 1 show on cable with 1.108 million viewers.

Juventud Guerrera is my frontrunner for comeback wrestler of the year, off this one match alone.

MJF did not make it clear to the crowd that he would be the special guest referee, so they didn’t really react to the rather anti-climactic fourth labor pitting Jericho against Wardlow.

Upon learning that Wardlow will be Jericho’s final hurdle to get to MJF, “Lance Storm”—Jericho’s first opponent—became a trending topic.

2.0 is the former Ever-Rise and they looked right at home in there.

Darby Allin easily got the biggest reaction of anybody in this match.

For the first time in his career, Jon Moxley seems like he’s in no-man’s land.

This Christian Cage match happened immediately following an entertaining Kenny Omega/The Elite segment and that certainly was not a coincidence.

Despite all her interference, Jim Ross refrained from calling The Bunny a Jezebel.

Leyla Hirsch making the save and attacking The Bunny was a great in-show commercial for their match later on tonight.

For a match where the winner was so predictable, it went far too long.

Christian Cage won this match with a Spear, imagine that.

Red Velvet might have the best theme music that nobody knows about, and it’s great to see her finally get some TV time.

Based on this segment, AEW has no plans to lean into the babyface reactions for Britt Baker, and are surging forward with Baker as a heel.

If the plan isn’t for Hangman Adam Page to challenge Kenny Omega for the AEW World Championship, this segment sure did a lot to make fans want to see Page get his revenge against Omega.

I never thought I’d see the day where somebody turned away outside interference in AEW the way Evil Uno and Stu Grayson did with The Dark Order.

Lee Johnson got a lot in this match but predictably lost to Miro.

Dustin Rhodes could be a great opponent fro Miro, even if it is a brief squash match to make Miro look like a more dominant champion.

This was a world title eliminator for the NWA Championship on NWA Powerrr, which sounds like it would be more fitting of a match at NWA Empowerrr.

Jim Ross noted Leyla Hirsch looks like someone who could be walking around in the Olympic village, which I feel compelled to clarify is a reference to her elite athleticism.

The size differential alone between the thoroughbred Camille and Leyla Hirsch makes this match intriguing.

Malakai Black’s entrance and entrance gear was perfect. He even wore antlers like my world champion Milwaukee Bucks.

Malakai Black is approaching Jon Moxley territory as a former WWE Superstar who is one of the quickest to connect with an AEW crowd.

Rhodes took an insane table bump that immediately got this crowd into this match if they weren’t already.

Has anybody sacrificed more for AEW and its talent than Cody Rhodes? Between his squash match loss to Brodie Lee, forfeiting his right to challenge for the AEW World Championship and then losing a one-sided match to Malakai Black where he was pinned with one foot. The man is a true martyr, and easily the most unselfish top star in wrestling.

The Mississippi River town of Ste. Genevieve, MO, might be the ideal spot for a buyer in search of a refreshing idea.This mixed-use structure on the … END_OF_DOCUMENT_TOKEN_TO_BE_REPLACED

More From ForbesJan 26, 2022,09:00am ESTCompany Named For Jetsons Son Unveils Autonomous Cargo EVTOL Drone Of The Near … END_OF_DOCUMENT_TOKEN_TO_BE_REPLACED