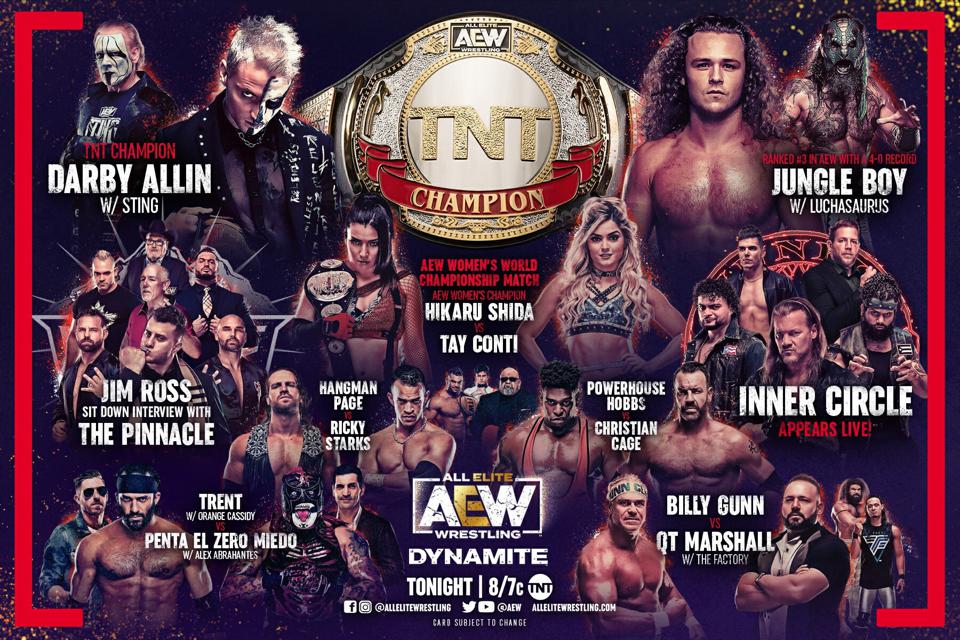 This was a rare moment where they played Ricky Starks’ music, and it almost fits him like a glove.

Ricky Starks landed directly on his neck and somehow was able to immediately walk it off and continue wrestling this match.

This otherwise solid match was overshadowed by a pair of dangerous bumps by Ricky Starks, who also randomly sold his ankle during parts of this match.

Hook’s stomping needs some work to say the least.

Penta El Zero M seems to be the last remaining heel in the Death Triangle.

Trent? has really leaned in to the question mark after his name, with even Justin Roberts pronouncing “Trent?” like he can’t believe he’s saying it.

Maybe it was because he was wearing a slimming all-black outfit, but Penta El Zero M appears to have gotten himself in great shape over the past few months.

Trent? was a bit rusty in this match, slipping, getting hung up on the ropes and even landing a spike piledriver directly on his head.

Alex Abrahantes was the star of this mach.

These two seem to really love working with one another.

This was a fantastic match with a lot of creative, violent-looking moves from both Hikaru Shida and Tai Conti.

The back-and-forth promos between The Pinnacle and The Inner Circle continue to entertain, but The Pinnacle won this round.

Chris Jericho’s show tunes song about MJF was very funny but I feel like his final line about sticking MJF’s head in a toilet was supposed to rhyme with “poo.”

QT Marshall was effective in getting heat from this crowd as nobody continues to do more with less.

On a night filled with scary bumps, Billy Gunn took a wicked piledriver from Marshall where his head slipped off the side of Marshall’s leg.

Judging by how slowly QT Marshall raised the wooden chair to hit Billy Gunn, it was a given somebody was going to interfere.

Everybody got over in this segment except Aaron Solow, who was used as a human shield before the match even started.

This match made me realize that AEW really takes its time counting people out. At one point, Christian Cage and Powerhouse Hobbs were on the outside for at least 30 seconds.

This match led to a tease of Christian Cage vs. Ricky Starks, which should be great.

Sting seems above being announced as a second for Darby Allin, but it shows AEW’s commitment to getting Allin over as a major star.

Why would the AEW Women’s Championship have a 60 minute time limit on television if AEW had multiple advertised matches on after?

As expected, the crowd was split between these two top babyfaces.

Never one to take a play off, Darby Allin pulled off a superplex during picture-in-picture.

The “this is awesome” chants seemed Pavlovian by this point, but they were still well-deserved.

Luchasaurus selling for ting hurt his Luchasaurus’ mystique a bit.

A woman wearing mask as a precaution against Covid-19 stands in a crowded area near India Gate, in New Delhi on March 19, 2021 as coronavirus cases … END_OF_DOCUMENT_TOKEN_TO_BE_REPLACED

For some homebound travelers yearning for a vacation, the question isn't whether to book a vacation this year, but when. Enthusiasm for travel is … END_OF_DOCUMENT_TOKEN_TO_BE_REPLACED

The panel that sets rents for more than two million New York City residents signaled on Wednesday that it may again freeze rents for some of them, a … END_OF_DOCUMENT_TOKEN_TO_BE_REPLACED