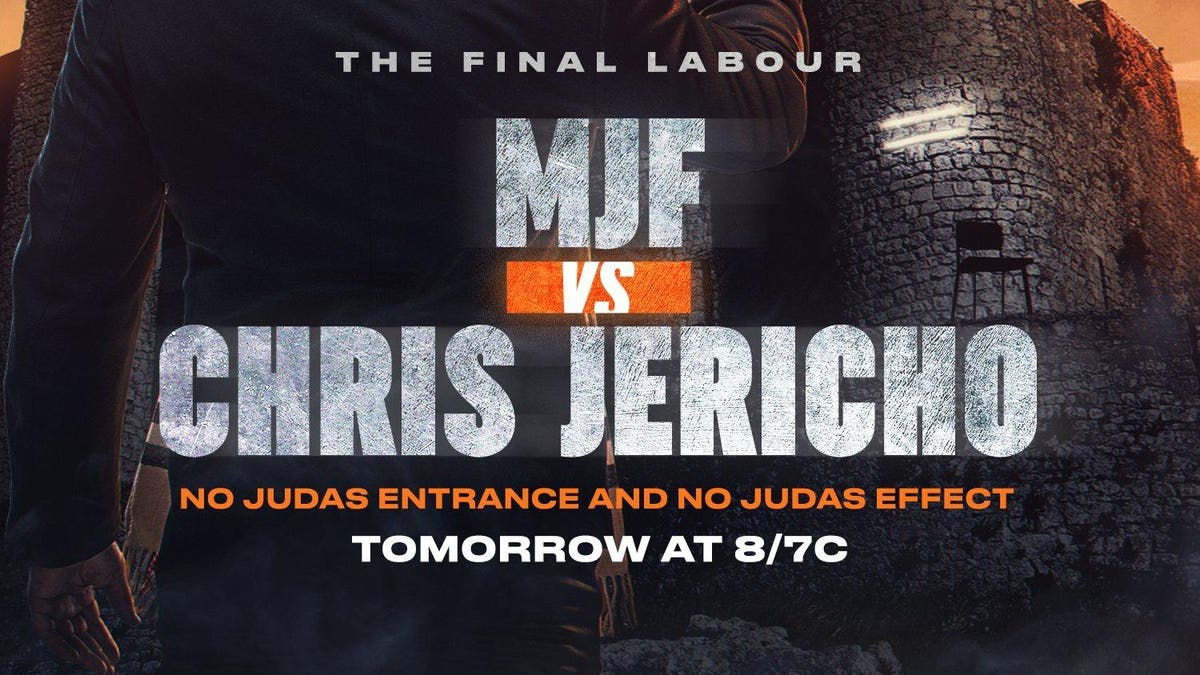 AEW Dynamite, from the Fertitta Center in Houston , Texas, advertised Jurassic Express challenging The Young Bucks for the AEW World Tag Team Championships, Sammy Guevara vs. Shawn Spears and MJF vs. Chris Jericho in the final Labour of Jericho.

Last week’s broadcast of AEW Dynamite broke its four-week streak of one million viewers or more, as it garnered 979,000 viewers.

Jon Moxley was attacked from behind during his entrance and was never heard from again in this match.

Sting was phenomenal in this match, but so was 2.0 (the former Ever-Rise). They have been the biggest steals in pro wrestling free agency so far.

Sting no-sold a double-power bomb through a table and I didn’t think an arena could be so loud.

This was Sting’s first TNT match in 20 years, and it was more than worth the wait.

This was the first time Brian Bosworth was shown on television in the front row, hugging Sting, and I have a feeling it won’t be his last.

Jim Ross’ “Sammy! Sammy! Sammy!” catchphrase has the potential to sell a lot of t-shirts.

This was the second match to start this show that began with the babyface being attacked from behind before the bell.

This match teased a potential feud between Aubrey Edwards and Tully Blanchard.

Jim Ross and Tony Schiavone were so good at being indignant with Shawn Spears continuing to make passes at Sammy Guevara’s fiancee Pam.

Shawn Spears bled the hard way, but it was fortuitous juice because he was booked to kick out of just about everything in this match and only lost right as he began to bleed.

Dan Lambert hit another home run with a heel promo on the fans as he once again channeled his inner Jim Cornette.

Lance Archer was on his way to the ring to attack Dan Lambert again, however he was jumped from behind (a running theme!) by the Men of the Year. This was a good way out of having Lance Archer running through Arlovski and Dos Santos because, if this were a shoot, that isn’t even close to what would happen if he took them on two-on-one.

AEW was on a hot streak with excellent matches and that continued with this awesome AEW Tag Team Championship match.

Brandon Cutler must have gone through at least three bottles of hairspray, and it was never not hilarious.

Kenny Omega paid homage to one of the all-time great moments in sports by saying “who do you think you re, I am!”

Paul Wight vs. QT Marshall Announced For AEW All Out

QT Marshall said “here in AEW, we don’t build up fan anticipation just to let them down,” which roughly translated to “CM Punk will be on Rampage this Friday.”

QT Marshall showed The Big Show’s hip (and his big, beautiful ass) on national television in a segment that could get him hired by Vince McMahon someday.

Paul Wight announced Paul Wight vs. QT Marshall for All Out and as long as it’s quick, this match should have no problem getting over in Chicago. By the way, who had The Big Show, Christian and CM Punk being on an AEW pay-per-view?

This Texas crowd treated Thunder Rosa as every bit the superstar she is.

Thunder Rosa and Penelope Ford worked hard, despite having some chemistry issues with a couple of awkward spots, and this crowd really elevated this match.

Jon Moxley cut a fantastic promo before this match where he called out Daniel Garcia, but not before running down Christian and Hangman Adam Page, likely in anticipation of a heel turn he desperately needs.

Chris Jericho’s entrance, with the fans singing his entire theme in the absence of the “Judas” music, was better than his “Judas” entrance. In fact, it may have been Chris Jericho’s best entrance in AEW.

Joe Burrow #9 of the Cincinnati Bengals against the Tennessee Titans during the AFC Divisional Playoff at Nissan Stadium on January 22, 2022 in … END_OF_DOCUMENT_TOKEN_TO_BE_REPLACED