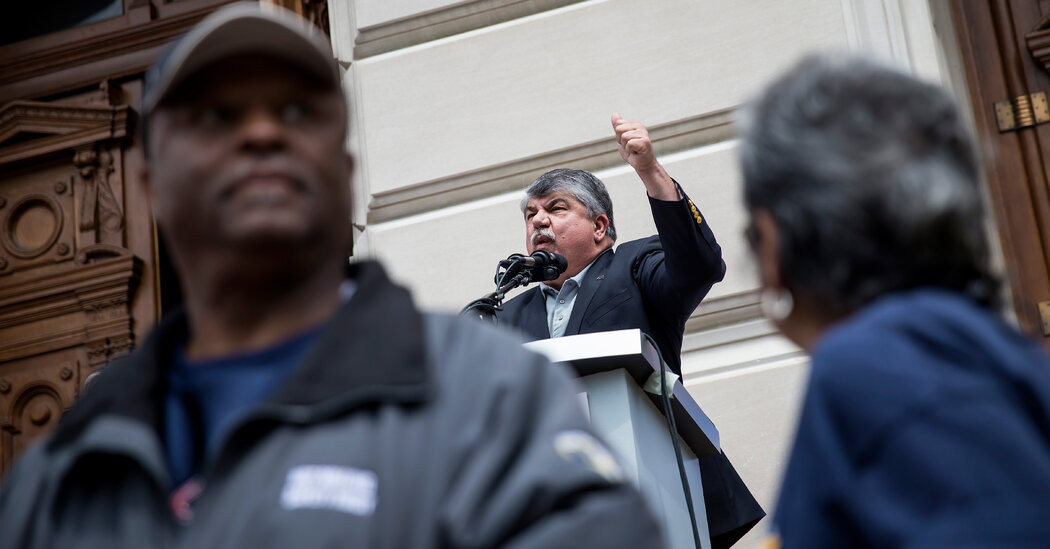 Richard Trumka’s 12 years as A.F.L.-C.I.O. president coincided with the continued decline of organized labor but also moments of opportunity, like the election of a devoutly pro-labor U.S. president. With Mr. Trumka’s death last week, the federation faces a fundamental question: What is the A.F.L.-C.I.O.’s purpose?

For years, top union officials and senior staff members have split into two broad camps on this question. On one side are those who argue that the A.F.L.-C.I.O., which has about 12 million members, should play a supporting role for its constituent unions — that it should help build a consensus around policy and political priorities, lobby for them in Washington, provide research and communications support, and identify the best ways to organize and bargain.

On the other side of the debate are those who contend that the federation should play a leading role in building the labor movement — by investing resources in organizing more workers; by gaining a foothold in new sectors of the economy; by funding nontraditional worker organizations, like those representing undocumented workers; and by forging deeper alliances with other progressive groups, like those promoting civil rights causes.

As president, Mr. Trumka identified more with the first approach, which several current and former union officials said had merit, particularly in light of his close ties to President Biden. Liz Shuler, who has served as acting president since Mr. Trumka’s death and hopes to succeed him, is said to have a similar orientation.

Ms. Shuler said in an interview on Friday that the department’s budget did not reflect other resources that go toward organizing, like the millions of dollars that the A.F.L.-C.I.O. sends to state labor federations and local labor councils, which can play an important role in organizing campaigns.

Although the rate of union membership fell by about 1.5 percentage points during Mr. Trumka’s tenure to under 11 percent, his influence in Washington helped lead to several accomplishments. Among them were a more worker-friendly revision of the North American Free Trade Agreement, tens of billions of dollars in federal aid to stabilize union pension plans and a job-creating infrastructure bill now moving through Congress.

sent hundreds of billions of dollars in aid to state and local governments, which public sector unions, increasingly the face of the labor movement, considered a lifeline.

But the cornerstone of Mr. Trumka’s plan to revive labor was a bill still awaiting enactment: the Protecting the Right to Organize Act, or PRO Act. The legislation would make unionizing easier by forbidding employers from requiring workers to attend anti-union meetings and would create financial penalties for employers that flout labor law. The federation invested heavily in helping to elect public officials who could help pass the measure.

During an interview with The New York Times in March, Mr. Trumka characterized the PRO Act as, in effect, labor’s last best hope. “Because of growing inequality, our economy is on a trajectory to implosion,” he said. “We have to have a way for workers to have more power and employers to have less. And the best way do that is to have the PRO Act.”

Ms. Shuler echoed that point, arguing that labor will be primed for a resurgence if the measure becomes law. “We have everything in alignment,” she said. “The only thing left is the PRO Act to unleash what I would say is the potential for unprecedented organizing.”

But so far, placing most of labor’s hopes on a piece of legislation strongly opposed by Republicans and the business community has proved to be a dubious bet. While the House passed the bill in March and Mr. Biden strongly supports it, the odds are long in a divided Senate.

When asked whether the A.F.L.-C.I.O. could support Mr. Biden’s multitrillion-dollar jobs plan if it came to a vote with no prospect of passing the PRO Act as well, Mr. Trumka refused to entertain the possibility that he would have to make such a decision.

Such funding can help support workers who want to help organize colleagues in their spare time, as well as a small cadre of professionals to assist them. “You have 100 people who you pay $25,000 per year, and 15 people full time, and the people can build something where they live,” Mr. Cohen said.

Stewart Acuff, the A.F.L.-C.I.O.’s organizing director from 2002 to 2008 and then a special assistant to its president, said the federation’s role in organizing should include more than just directly funding those efforts. He said it was essential to make adding members a higher priority for all of organized labor, as he sought to do under Mr. Trumka’s predecessor.

“We were challenging every level of the labor movement to spend 30 percent of their resources on growth,” said Mr. Acuff, who has criticized the direction of the federation under Mr. Trumka. “That didn’t just mean organizers. It meant using access to every point of leverage,” like pressuring companies to be more accepting of unions.

Mr. Acuff also said that the A.F.L.-C.I.O. must be more willing to place long bets on organizing workers that may not pay off with more members in the short term, but that help build power and leverage for workers.

succeeded in many ways even though it has produced few if any new union members. The A.F.L.-C.I.O. has supported the Fight for $15 but not provided direct financial backing.

Mr. Cohen and Mr. Acuff both cited the importance of building long-term alliances with outside groups — like those championing civil rights or immigrant rights or environmental causes — which can increase labor’s power to demand, say, that an employer stand down during a union campaign.

speech he made in Ferguson, Mo., after a young Black man, Michael Brown, was shot to death by a police officer there in 2014.

But Mr. Trumka faced a backlash on this front from more conservative unions, who believed the proper role of the A.F.L.-C.I.O. was to focus on economic issues affecting members rather than questions like civil rights.

“There were some unions — not just the building trades — who felt like that work was not what we should be focusing on,” Carmen Berkley, a former director of the A.F.L.-C.I.O.’s Civil, Human and Women’s Rights Department, said in an interview last year.

argued for diverting much of the tens of millions of dollars the labor movement spends on political activities to help more workers unionize.

But Ms. Shuler insists that deciding between investing in organizing and the federation’s other priorities is a false choice.

“I don’t think that they are mutually exclusive,” she said. “The way modern organizations work, you no longer have heavy institutional budgets that are full of line items. We organize around action. We identify a target where there’s heat.” Then, she said, the organizations raise money and get things done.

The Mississippi River town of Ste. Genevieve, MO, might be the ideal spot for a buyer in search of a refreshing idea.This mixed-use structure on the … END_OF_DOCUMENT_TOKEN_TO_BE_REPLACED

More From ForbesJan 26, 2022,09:00am ESTCompany Named For Jetsons Son Unveils Autonomous Cargo EVTOL Drone Of The Near … END_OF_DOCUMENT_TOKEN_TO_BE_REPLACED

The prison in Hasaka where thousands of Islamic State fighters are held, in 2019.Credit...Ivor Prickett for The New York TimesThe prison at the center … END_OF_DOCUMENT_TOKEN_TO_BE_REPLACED