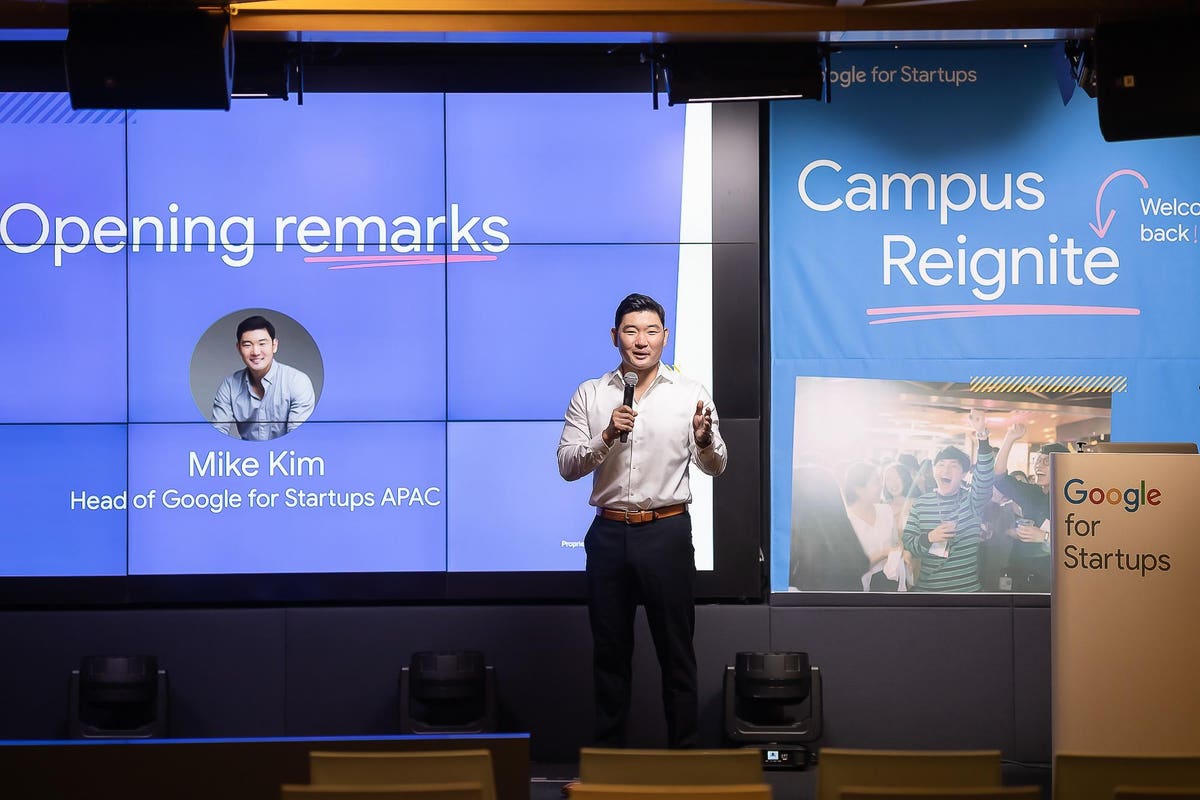 In his role overseeing Google’s startup support arm in Asia-Pacific, Mike Kim sees promising growth opportunities for AI startups in the region, thanks to government support for the increasingly important technology, a deep talent pool and in-a-hurry population, among other factors.

Two years later, Kim joined Google for Startups as Asia-Pacific partnerships manager. He was promoted to Asia-Pacific head of Google for Startups a year later and relocated to Singapore, another vibrant startup hub in Asia, where Google has its regional headquarters. In his role overseeing Google’s startup support arm in Asia-Pacific, Kim sees promising growth opportunities for AI startups in the region, thanks to government support for the increasingly important technology, a deep talent pool and in-a-hurry population, among other factors.

Kim points to Seoul-based AI For Pet as an example of a fast-growing AI startup in the Asia-Pacific. Founded just three years ago by Euna Hur, AI For Pet operates a smartphone app that can detect eye and skin diseases in cats and dogs by using the phone’s camera and AI algorithms. The startup is working on expanding its diagnostic capabilities to include gum disease and joint abnormalities.

“Do you want to go to the vet, get in line and wait a few hours to—maybe in 24 hours—see why your dog is sick, or a quick one-minute photo of your dog at home and get answers?,” says Kim. More than one million samples of imaging data, labeled by veterinary experts, have been used to develop AI For Pet’s AI models, according to the startup.

AI For Pet has already raised several millions of dollars in funding from investors that include state-owned Industrial Bank of Korea, Korea Asset Investment Securities and POSTECH Holdings, an accelerator backed by Pohang University of Science and Technology, one of South Korea’s top technology universities. Last year the startup graduated from Shinhan Square Bridge Incheon, a startup support program backed by South Korea’s Shinhan Financial Group, the Korean Ministry of SMEs and Startups, the Incheon City government and Korean billionaire Seo Jung-jin’s drugmaker Celltrion. And earlier this month, AI For Pet graduated from Google for Startups’ Cloud Academy, a three-month program where startups receive mentorship and training on data analysis and machine learning, among others.

Asia’s rapidly aging population is another reason why Kim is optimistic about AI startups. According to a 2019 United Nations report, the region is home to the seven fastest-aging populations in the world: South Korea, Singapore, Taiwan, Macau, Maldives, Thailand and Hong Kong. Japan already has the world’s oldest population—a title it has held since the mid-2000s.

By 2040, the Asia-Pacific region will be home to more than half of the world’s elderly population (65 and over), according to research firm Euromonitor. “While Japan will remain the world’s oldest country with the highest share of 65-plus population by 2040, South Korea and Singapore will emerge in the list of the top five oldest countries, driven by decades of low fertility rates,” Euromonitor said in a report.

“When you have aging populations like Korea and Japan that have to lean towards more hardware and robotics, the technology or software inside the robot is leveraging AI,” says Kim. “AI can support a company when there’s not enough people to hire. So countries that are facing a massive demographic cliff are going to leverage AI even more because they need it.”

Latona in Japan is helping companies do just that. The Tokyo-based startup provides AI-powered hardware and software that helps automate and digitize processes. In December 2020, Latona launched an AI-powered app called OMOTE-Bako that digitizes front- and back-end processes for hotels and ryokans (traditional Japanese inns), such as reservations and checking in. Last year, the startup received about $10 million in investments from billionaire Masayoshi Son’s SoftBank Corp. and Japanese asset manager Sparx Group.

Latona is led by CEO Kyoko Otawa, who cofounded the startup in 2018 after stints as a technology and finance consultant at IT consulting firm Accenture and a consultant at billionaire Hiroshi Mikitani’s Japanese e-commerce giant Rakuten. In 2020, Otawa was one of seven female founders in Asia to be invited to join Google for Startups’ Immersion: Women Founders program, which provides mentoring and networking opportunities. And in May, Latona graduated from Google for Startups’ Japan accelerator program, where the startup received training on Google products, like its machine learning platform TensorFlow, mentorship from Googlers and industry experts, and networking opportunities.

Kim also sees a big opportunity in the fast-growing fintech field, especially in India and Southeast Asia, where millions of people don’t use banks or other traditional institutions. “You can reinvent the way people bank and invest, and many can use AI technology to do that,” says Kim, pointing to NIRA, based in the southern Indian tech hub of Bengaluru, as an example.

Founded in 2017 by Nupur Gupta and Rohit Sen, both formerly of Goldman Sachs, NIRA operates an app that provides small personal loans (up to 100,000 rupees, or $1,250). AI technology can be used, for example, to speed up credit-scoring and loan underwriting. In 2019, the startup completed a mentorship program in India run by leading U.S. accelerator TechStars and graduated from Google for Startups’ India accelerator program.

Almost a quarter of all Indian adults, or 230 million people, still don’t have a bank account, according to World Bank data. “There’s a huge unbanked population,” says Kim. “So in one sense that’s a big challenge, but in another sense it’s a great opportunity.”

Three men were indicted in the death of the notorious gangster James (Whitey) Bulger, who was beaten to death four years ago in a West Virginia … END_OF_DOCUMENT_TOKEN_TO_BE_REPLACED

Dr. Connolly and Dr. Mott live in the North Baltimore neighborhood of Homeland, known for its strong public schools and colonial architecture, which … END_OF_DOCUMENT_TOKEN_TO_BE_REPLACED