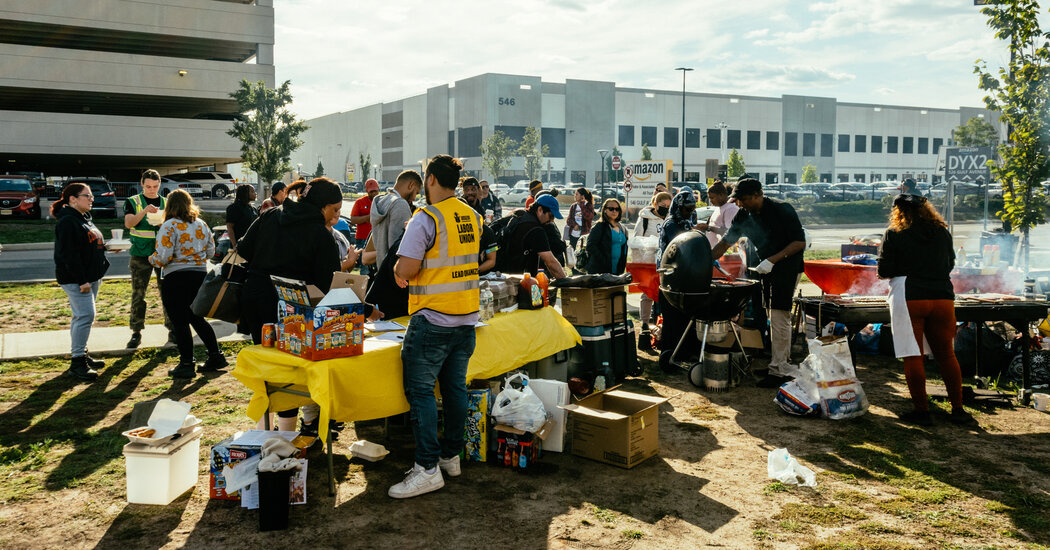 The Amazon Labor Union has built momentum leading up to an election this week at an 800-person warehouse near Albany, N.Y.

A federal labor official recently endorsed the union’s election victory at a Staten Island warehouse in April, which Amazon has challenged, while workers’ frustrations over pay and safety have created an opportunity to add supporters and pressure the company to bargain.

But the union faces questions about whether it can translate such opportunities into lasting gains. For months after its victory at the 8,000-person warehouse on Staten Island, the union appeared to be out of its depths. It nearly buckled under a crush of international media attention and lost a vote at a second Staten Island warehouse in May.

At times, it has neglected organizing inside the original warehouse, known as JFK8, where high turnover means the union must do constant outreach just to maintain support — to say nothing of expanding. Christian Smalls, the union’s president and a former JFK8 employee, seemed distracted as he traveled widely. There was burnout and infighting in the group, and several core members left or were pushed out.

attempt to overturn its victory, which consumed time and resources, as supporters and leaders testified in hearings that dragged across 24 business days beginning in mid-June. The union delayed plans to train more workers as organizers. A national organizing call was put on hold.

a party in Hollywood and decided that the Amazon Labor Union “understood where we were coming from,” she recalled in an interview.

could spend years appealing the election result on Staten Island, and the company still has enormous power over JFK8 workers. After workers protested Amazon’s response to a fire at the site last week, the company suspended more than 60 of them with pay while, it said, it investigated what had occurred. The union filed unfair-labor-practice charges over the suspensions; Amazon said most of the workers had returned to work.

unusually high injury rates, among other safety issues. The facility was evacuated after a cardboard compactor caught fire last week, two days after the JFK8 fire, which was similar.

“The timeline to fix things is before something tragic happens,” Ms. Goodall said.

She accused Amazon of running an aggressive anti-union campaign, including regular meetings with employees in which it questions the union’s credibility and suggests that workers could end up worse off if they unionize.

Mr. Flaningan, the company spokesman, said that while injuries increased as Amazon trained hundreds of thousands of new workers in 2021, the company believed that its safety record surpassed that of other retailers over a broader period.

“Like many other companies, we hold these meetings because it’s important that everyone understands the facts about joining a union and the election process itself,” he said, adding that the decision to unionize is up to employees.

AUSTIN, Texas--(BUSINESS WIRE)--As the first multifamily management company to be recognized in the Public Relations and Marketing Excellence Awards, … END_OF_DOCUMENT_TOKEN_TO_BE_REPLACED

There have been whispers of cooling housing and rental prices in the San Francisco Bay Area, but that hasn't yet translated into practical, noticeable … END_OF_DOCUMENT_TOKEN_TO_BE_REPLACED

Cars pass in Independence Square at twilight in Kyiv, Ukraine, Monday, Oct. 31, 2022. Rolling ... [+] blackouts are increasing across Ukraine as the … END_OF_DOCUMENT_TOKEN_TO_BE_REPLACED