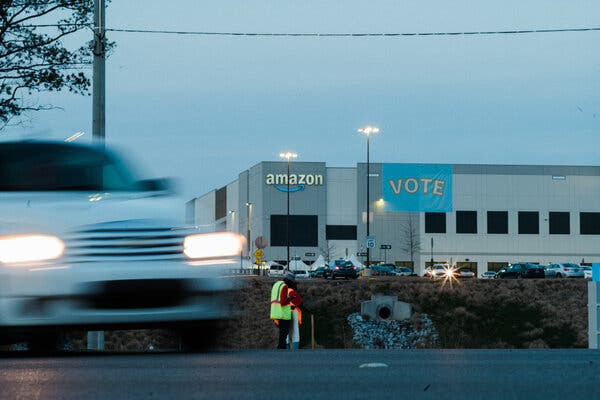 Unofficial Tally of Amazon Warehouse Unionization Votes 1,608 yes votes are needed for the union to win today. The New York Times·As of 7:19 p.m. Hundreds of ballots have been contested, which could delay either side from reaching the threshold. One ballot was marked as void. The ballots were being counted in random order in the National Labor Relations Board’s office in Birmingham, Ala., and the process was broadcast via Zoom to more than 200 journalists, lawyers and other observers.The voting was conducted by mail from early February until the end of last month. A handful of workers from the labor board called out the results of each vote “Yes” for a union or “No” for nearly four hours on Thursday.Amazon and the union had spent more than a week in closed sessions, reviewing the eligibility of each ballot cast with the labor board, the federal agency that conducts union elections. The union said several hundred ballots had been contested, largely by Amazon, and those ballots were set aside to be adjudicated and counted only if they were vital to determining an outcome. If Amazon’s large margin holds steady throughout the count, the contested ballots are likely to be moot.The incomplete tally put Amazon on the cusp of defeating the most serious organized-labor threat in the company’s history. Running a prominent campaign since the fall, the Retail, Wholesale and Department Store Union aimed to establish the first union at an Amazon warehouse in the United States. The result will have major implications not only for Amazon but also for organized labor and its allies.

Labor organizers have tapped into dissatisfaction with working conditions in the warehouse, saying Amazon’s pursuit of efficiency and profits makes the conditions harsh for workers. The company counters that its starting wage of $15 an hour exceeds what other employers in the area pay, and it has urged workers to vote against unionizing.

Amazon has always fought against unionizing by its workers. But the vote in Alabama comes at a perilous moment for the company. Lawmakers and regulators — not competitors — are some of its greatest threats, and it has spent significant time and money trying to keep the government away from its business.

The union drive has had the retailer doing a political balancing act: staying on the good side of Washington’s Democratic leaders while squashing an organizing effort that President Biden has signaled he supported.

Labor leaders and liberal Democrats have seized on the union drive, saying it shows how Amazon is not as friendly to workers as the company says it is. Some of the company’s critics are also using its resistance to the union push to argue that Amazon should not be trusted on other issues, like climate change and the federal minimum wage.

Sophia June contributed to this report.

Before the pandemic, companies used to lure top talent with lavish perks like subsidized massages, Pilates classes and free gourmet meals. Now, the hottest enticement is permission to work not just from home, but from anywhere — even, say, from the French Alps or a Caribbean island.

Revolut, a banking start-up based in London, said Thursday that it would allow its more than 2,000 employees to work abroad for up to two months a year in response to requests to visit overseas family for longer periods.

“Our employees asked for flexibility, and that’s what we’re giving them as part of our ongoing focus on employee experience and choice,” said Jim MacDougall, Revolut’s vice president of human resources.

Georgia Pacquette-Bramble, a communications manager for Revolut, said she was planning to trade the winter in London for Spain or somewhere in the Caribbean. Other colleagues have talked about spending time with family abroad.

Revolut has been valued at $5.5 billion, making it one of Europe’s most valuable financial technology firms. It joins a number of companies that will allow more flexible working arrangements to continue after the pandemic ends. JPMorgan Chase, Salesforce, Ford Motor and Target have said they are giving up office space as they expect workers to spend less time in the office, and Spotify has told employees they can work from anywhere.

Not all companies, however, are shifting away from the office. Tech companies, including Amazon, Facebook, Google and Apple, have added office space in New York over the last year. Amazon told employees it would “return to an office-centric culture as our baseline.”

Dr. Dan Wang, an associate professor at Columbia Business School, said he did not expect office-centric companies to lose top talent to companies that allow flexible working, in part because many employees prefer to work from the office.

Furthermore, when employees are not in the same space, there are fewer spontaneous interactions, and spontaneity is critical for developing ideas and collaborating, Dr. Wang said.

“There is a cost,” he said. “Yes, we can interact via email, via Slack, via Zoom — we’ve all gotten used to that. But part of it is that we’ve lowered our expectations for what social interaction actually entails.”

Revolut said it studied tax laws and regulations before introducing its policy, and that each request to work from abroad was subject to an internal review and approval process. But for some companies looking to put a similar policy in place, a hefty tax bill, or at least a complicated tax return, could be a drawback.

Online stores offering counterfeit or stolen vaccine cards have mushroomed in recent weeks, according to Saoud Khalifah, the founder of FakeSpot, which offers tools to detect fake listings and reviews online.

The efforts are far from hidden, with Facebook pages named “vax-cards” and eBay listings with “blank vaccine cards” openly hawking the items, Sheera Frenkel reports for The New York Times.

Last week, 45 state attorneys general banded together to call on Twitter, Shopify and eBay to stop the sale of false and stolen vaccine cards.

Facebook, Twitter, eBay, Shopify and Etsy said that the sale of fake vaccine cards violated their rules and that they were removing posts that advertised the items.

The Centers for Disease Control and Prevention introduced the vaccination cards in December, describing them as the “simplest” way to keep track of Covid-19 shots. By January, sales of false vaccine cards started picking up, Mr. Khalifah said. Many people found the cards were easy to forge from samples available online. Authentic cards were also stolen by pharmacists from their workplaces and put up for sale, he said.

Many people who bought the cards were opposed to the Covid-19 vaccines, Mr. Khalifah said. In some anti-vaccine groups on Facebook, people have publicly boasted about getting the cards.

Other buyers want to use the cards to trick pharmacists into giving them a vaccine, Mr. Khalifah said. Because some of the vaccines are two-shot regimens, people can enter a false date for a first inoculation on the card, which makes it appear as if they need a second dose soon. Some pharmacies and state vaccination sites have prioritized people due for their second shots.

In only a year, the market value of office towers in Manhattan has plummeted 25 percent, according to city projections released on Wednesday.

Across the country, the vacancy rate for office buildings in city centers has steadily climbed over the past year to reach 16.4 percent, according to Cushman & Wakefield, the highest in about a decade. That number could climb further if companies keep giving up office space because of hybrid or fully remote work, Peter Eavis and Matthew Haag report for The New York Times.

So far, landlords like Boston Properties and SL Green have not suffered huge financial losses, having survived the past year by collecting rent from tenants locked into long leases — the average contract for office space runs about seven years.

But as leases come up for renewal, property owners could be left with scores of empty floors. At the same time, many new office buildings are under construction — 124 million square feet nationwide, or enough for roughly 700,000 workers. Those changes could drive down rents, which were touching new highs before the pandemic. And rents help determine assessments that are the basis for property tax bills.

Many big employers have already given notice to the owners of some prestigious buildings that they are leaving when their leases end. JPMorgan Chase, Ford Motor, Salesforce, Target and more are giving up expensive office space and others are considering doing so.

The stock prices of the big landlords, which are often structured as real estate investment trusts that pass almost all of their profit to investors, trade well below their previous highs. Shares of Boston Properties, one of the largest office landlords, are down 29 percent from the prepandemic high. SL Green, a major New York landlord, is 26 percent lower.

After all, Lonely Planet, which was founded by Tony Wheeler with his wife, Maureen, was itself named by mistake. Mr. Wheeler thought he was adopting … END_OF_DOCUMENT_TOKEN_TO_BE_REPLACED

In 2012, the NGO Committee on Spirituality, Values and Global Concerns recognized her efforts, awarding her its “Spirit of the U.N.” award.Influenced … END_OF_DOCUMENT_TOKEN_TO_BE_REPLACED

BUCHAREST, Romania — The apparent killing of a large brown bear in Romania by a member of the Liechtenstein royal family has set off a wave of anger … END_OF_DOCUMENT_TOKEN_TO_BE_REPLACED