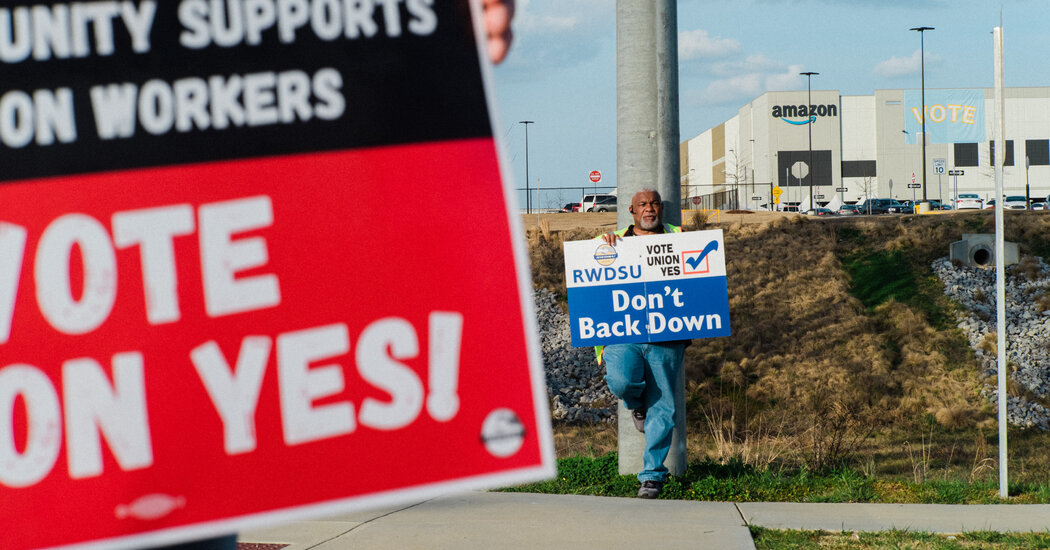 During the first union election at Amazon’s Bessemer, Ala., warehouse, early last year, organizers largely avoided visiting workers at home because Covid was raging and few Americans were vaccinated.

The Retail, Wholesale and Department Store Union believed the precaution was prudent even if it made persuading workers harder and may have contributed to the union’s lopsided defeat.

On Friday, the National Labor Relations Board will mail out ballots to workers at the same warehouse in a so-called re-run election, which the agency ordered after finding that Amazon behaved improperly during the last campaign.

But for this election, which runs through March 25, the labor movement is pulling few punches. Several national unions have collectively sent dozens of organizers to Bessemer to help rally workers. And organizers and workers have spent the past several months going door-to-door to build support for the union.

far more than half of all elections during that time, according to data from the National Labor Relations Board.

“In cases where the margin of victory is pretty significant one way or the other, the outcome often doesn’t change the second time,” said David Pryzbylski, a management-side lawyer at Barnes & Thornburg.

Those odds may be longer still at a company like Amazon, which has the resources to hire consultants and saturate workers with anti-union messages, as it did during the last election.

Turnover at Amazon is high — over 150 percent a year even before a recent surge of quitting nationwide — and could introduce uncertainty because it’s unclear how new workers will respond to arguments on either side.

previously said that its performance targets take into account safety and employees’ experience.

For Amazon, which is facing challenges to its labor model on multiple fronts, there is little incentive to ease its resistance to the union. Last year, California approved a law that would restrict the company’s use of productivity targets, and the roughly 1.4 million-member International Brotherhood of Teamsters elected a new president who promised a large investment in unionizing the company.

determined that organizers at JFK8, a massive warehouse on Staten Island, had submitted enough signatures to warrant a vote. The organizers are trying to form a new union, called Amazon Labor Union, rather than working with established groups. The labor board will hold a hearing in mid-February to determine how many workers could be eligible to vote, as well as the timing and terms of the election.

This week, the same union filed a petition for an election at a neighboring Amazon facility on Staten Island.

pressed for in-person voting, albeit at an off-site location in the union’s case, the labor board decided to run another mail-in election because of the pandemic.

Variations on practices that the labor board cited when invalidating the last election also remain in place, prompting the union to urge changes to the way the new election will be conducted. Not least is a so-called collection box that Amazon lobbied the U.S. Postal Service to install last year near the warehouse entrance, where workers were urged to deposit their ballots.

Amazon has said it sought the collection box to help workers vote safely, and that it did not have access to ballots deposited inside of it. But a regional director of the labor board found that Amazon had “essentially hijacked the process” by procuring the box. “This dangerous and improper message to employees destroys trust in the board’s processes and in the credibility of the election results,” the regional director wrote.

Yet in the run-up to the revote, the regional director allowed the Postal Service merely to move the box to a “neutral location” at the warehouse, rather than remove it entirely. The union argued in a request for an appeal that there is no neutral location on the site, and that the new location is still in view of Amazon’s surveillance cameras. A decision on the appeal could come during or after the election.

Some employees also say that despite reaching a nationwide settlement with the labor board in December to give union supporters more access to colleagues while at work, Amazon is still making it difficult for them to plead their case where they work.

Isaiah Thomas, a ship dock worker at the warehouse, recently received a letter from management saying he had violated the company policy against solicitation by talking to co-workers about the union during his break, though the company did not officially discipline him over the alleged violation.

“You were interfering with fellow associates during their working time, in their work areas,” the letter said. The union has filed an unfair labor practice charge arguing that the letter violates the company’s settlement with the labor board.

Yet the circumstances of the second election do appear to differ from those of the first election in some key respects. There is, for one thing, the fact of the finding by the labor board that Amazon violated union election rules, which organizers say comes up regularly in conversations with workers.

Mr. Appelbaum, the union president, said the on-the-ground presence of other unions was substantially higher than last year, thanks partly to the urging of Liz Shuler, the president of the A.F.L.-C.I.O., of which the retail workers union is a part.

Even non-A.F.L. unions like the Service Employees International Union and the Teamsters have dispatched organizers to Alabama, underscoring the high stakes for labor.

“I think there’s a recognition of the importance and transcendent nature of this fight,” Mr. Appelbaum said. “People throughout the labor movement understand that we cannot let Amazon go unchallenged or else it’s going to set the model for what the future of work is going to look like.”

He said that workers felt less intimidated by Amazon this time, with more of them speaking up during mandatory anti-union meetings. Pro-union workers also now wear T-shirts advertising their support for the union twice each week in a show of solidarity.

One group of workers recently delivered a petition with over 100 signatures to managers complaining of undignified treatment, low pay and insufficient breaks and break room equipment. Ms. Agrait, the Amazon spokeswoman, said the company encouraged constant communication between workers and managers.

Mr. Thomas, the ship dock worker, spends two days each week knocking on the doors of colleagues and said in an interview that many workers who voted against the union last year say they are supportive this time because the company hasn’t followed through on promises to act on their feedback.

“A lot of folks said they wanted to try to give Amazon a chance, but they didn’t meet their end of bargain,” he said. “Now they actually want to help form this union.”

Local officials and housing advocates worry about what the damaged housing stock will mean for people with low wages or fixed incomes. In interviews, … END_OF_DOCUMENT_TOKEN_TO_BE_REPLACED