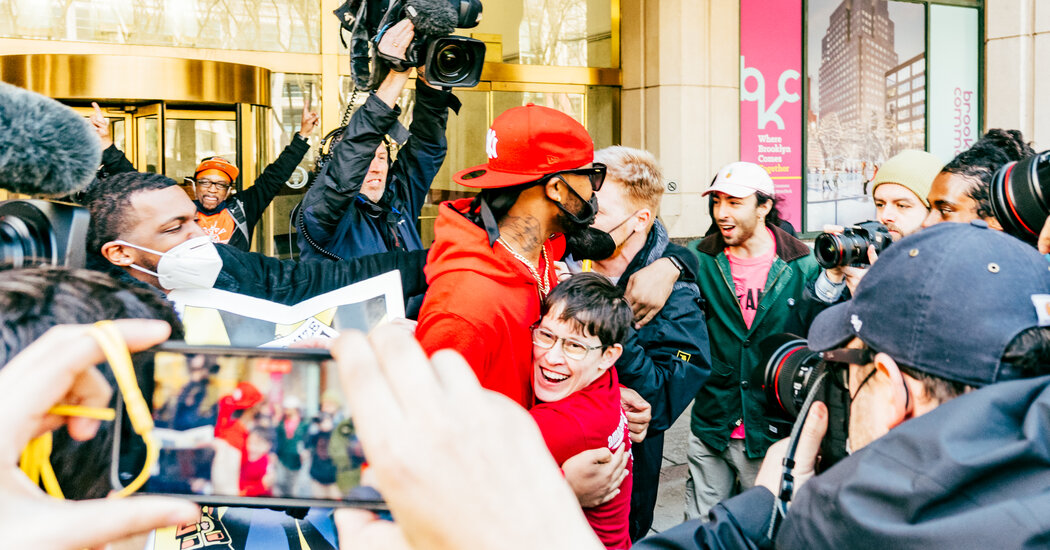 It was a union organizing campaign that few expected to have a chance. A handful of employees at Amazon’s massive warehouse on Staten Island, operating without support from national labor organizations, took on one of the most powerful companies in the world.

And, somehow, they won.

Workers at the facility voted by a wide margin to form a union, according to results released on Friday, in one of the biggest victories for organized labor in a generation.

Employees cast 2,654 votes to be represented by Amazon Labor Union and 2,131 against, giving the union a win by more than 10 percentage points, according to the National Labor Relations Board. More than 8,300 workers at the warehouse, which is the only Amazon fulfillment center in New York City, were eligible to vote.

The win on Staten Island comes at a perilous moment for labor unions in the United States, which saw the portion of workers in unions drop last year to 10.3 percent, the lowest rate in decades, despite high demand for workers, pockets of successful labor activity and rising public approval.

including some labor officials — say that traditional unions haven’t spent enough money or shown enough imagination in organizing campaigns and that they have often bet on the wrong fights. Some point to tawdry corruption scandals.

The union victory at Amazon, the first at the company in the United States after years of worker activism there, offers an enormous opportunity to change that trajectory and build on recent wins. Many union leaders regard Amazon as an existential threat to labor standards because it touches so many industries and frequently dominates them.

likely to be a narrow loss by the Retail, Wholesale and Department Store Union at a large Amazon warehouse in Alabama. The vote is close enough that the results will not be known for several weeks as contested ballots are litigated.

The surprising strength shown by unions in both locations most likely means that Amazon will face years of pressure at other company facilities from labor groups and progressive activists working with them. As a recent string of union victories at Starbucks have shown, wins at one location can provide encouragement at others.

Amazon hired voraciously over the past two years and now has 1.6 million employees globally. But it has been plagued by high turnover, and the pandemic gave employees a growing sense of power while fueling worries about workplace safety. The Staten Island warehouse, known as JFK8, was the subject of a New York Times investigation last year, which found that it was emblematic of the stresses — including inadvertent firings and sky-high attrition — on workers caused by Amazon’s employment model.

“The pandemic has fundamentally changed the labor landscape” by giving workers more leverage with their employers, said John Logan, a professor of labor studies at San Francisco State University. “It’s just a question of whether unions can take advantage of the opportunity that transformation has opened up.”

Standing outside the N.L.R.B. office in Brooklyn, where the ballots were tallied, Christian Smalls, a former Amazon employee who started the union, popped a bottle of champagne before a crowd of supporters and press. “To the first Amazon union in American history,” he cheered.

asked a judge to force Amazon to swiftly rectify “flagrant unfair labor practices” it said took place when Amazon fired a worker who became involved with the union. Amazon argued in court that the labor board abandoned “the neutrality of their office” by filing the injunction just before the election.

Amazon would need to prove that any claims of undue influence undermined the so-called laboratory conditions necessary for a fair election, said Wilma B. Liebman, the chair of the N.L.R.B. under President Barack Obama.

President Biden was “glad to see workers ensure their voices are heard” at the Amazon facility, Jen Psaki, the White House press secretary, told reporters. “He believes firmly that every worker in every state must have a free and fair choice to join a union,” she said.

The near-term question facing the labor movement and other progressive groups is the extent to which they will help the upstart Amazon Labor Union withstand potential challenges to the result and negotiate a first contract, such as by providing resources and legal talent.

“The company will appeal, drag it out — it’s going to be an ongoing fight,” said Gene Bruskin, a longtime organizer who helped notch one of labor’s last victories on this scale, at a Smithfield meat-processing plant in 2008, and has informally advised the Staten Island workers. “The labor movement has to figure out how to support them.”

Sean O’Brien, the new president of the 1.3 million-member International Brotherhood of Teamsters, said in an interview on Thursday that the union was prepared to spend hundreds of millions of dollars unionizing Amazon and to collaborate with a variety of other unions and progressive groups.

said he became alarmed in March 2020 after encountering a co-worker who was clearly ill. He pleaded with management to close the facility for two weeks. The company fired him after he helped lead a walkout over safety conditions in late March that year.

Amazon said at the time that it had taken “extreme measures” to keep workers safe, including deep cleaning and social distancing. It said it had fired Mr. Smalls for violating social distancing guidelines and attending the walkout even though he had been placed in a quarantine.

After workers at Amazon’s warehouse in Bessemer, Ala., overwhelmingly rejected the retail workers union in its first election last spring, Mr. Smalls and Derrick Palmer, an Amazon employee who is his friend, decided to form a new union, called Amazon Labor Union.

While the organizing in Alabama included high-profile tactics, with progressive supporters like Senator Bernie Sanders visiting the area, the organizers at JFK8 benefited from being insiders.

For months, they set up shop at the bus stop outside the warehouse, grilling meat at barbecues and at one point even passing out pot. (The retail workers said they were hamstrung by Covid during their initial election in Alabama.)

At times the Amazon Labor Union stumbled. The labor board determined this fall that the fledgling union, which spent months collecting signatures from workers requesting a vote, had not demonstrated sufficient support to warrant an election. But the organizers kept trying, and by late January they had finally gathered enough signatures.

Amazon played up its minimum wage of $15 an hour in advertising and other public relations efforts. The company also waged a full-throated campaign against the union, texting employees and mandating attendance at anti-union meetings. It spent $4.3 million on anti-union consultants nationwide last year, according to annual disclosures filed on Thursday with the Labor Department.

In February, Mr. Smalls was arrested at the facility after managers said he was trespassing while delivering food to co-workers and called the police. Two current employees were also arrested during the incident, which appeared to galvanize interest in the union.

The difference in outcomes in Bessemer and Staten Island may reflect a difference in receptiveness toward unions in the two states — roughly 6 percent of workers in Alabama are union members, versus 22 percent in New York — as well as the difference between a mail-in election and one conducted in person.

But it may also suggest the advantages of organizing through an independent, worker-led union. In Alabama, union officials and professional organizers were still barred from the facility under the settlement with the labor board. But at the Staten Island site, a larger portion of the union leadership and organizers were current employees.

“What we were trying to say all along is that having workers on the inside is the most powerful tool,” said Mr. Palmer, who makes $21.50 an hour. “People didn’t believe it, but you can’t beat workers organizing other workers.”

The independence of the Amazon Labor Union also appeared to undermine Amazon’s anti-union talking points, which cast the union as an interloping “third party.”

On March 25, workers at JFK8 started lining up outside a tent in the parking lot to vote. And over five voting days, they cast their ballots to form what could become the first union at Amazon’s operations in the United States.

Another election, brought also by Amazon Labor Union at a neighboring Staten Island facility, is scheduled for late April.

The Seattle Seahawks are very much still in the running for Baker Mayfield. (Photo by Stacy ... [+] Revere/Getty Images) Getty Images The Seattle … END_OF_DOCUMENT_TOKEN_TO_BE_REPLACED

(CNN) — Kim Kyung-seop recalls going to cheap bars after class with his friends, where they binged on as much makgeolli as possible. "You know the … END_OF_DOCUMENT_TOKEN_TO_BE_REPLACED