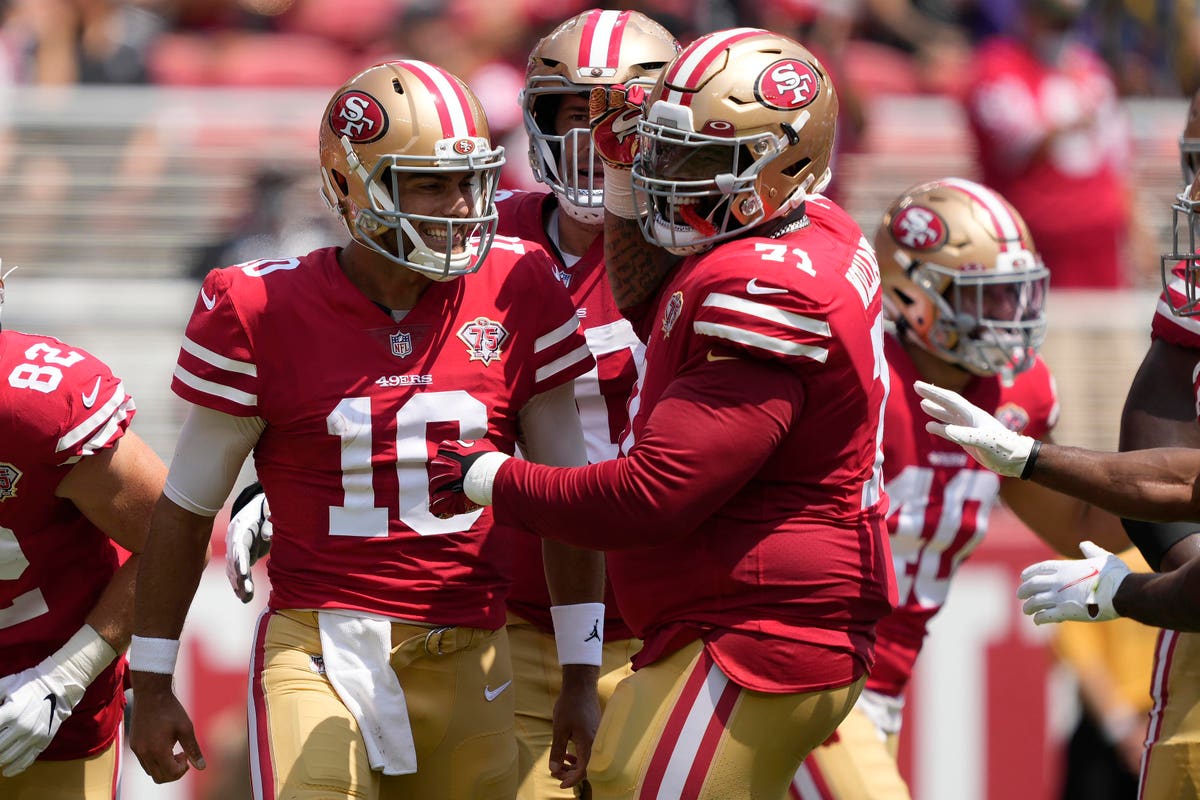 The San Francisco 49ers announced their initial 53-man roster for the 2021 NFL season. As is usually the case, there were some surprises.

Things will obviously change in the week-plus leading up to the 49ers’ regular-season opener. For now, here’s a look at San Francisco’s initial 53-man roster with predictions as it relates to the team’s practice squad.

San Francisco opted to retain just two quarterbacks on its 53-man roster. This is a clear indication that the team expects Trey Lance’s finger injury to only keep him out a week or so. However, there remains a decent chance that Nate Sudfeld returns to the practice squad after being waived on Tuesday. He can add extra insurance to the mix behind Garoppolo and Lance.

It’s somewhat surprising that the 49ers moved off veteran free-agent signing Wayne Gallman during final cuts. He did a tremendous job in replacing an injured Saquon Barkley with the New York Giants last season. With that said, Hasty’s preseason performance made him a near lock to make the roster. A late-round pick this past spring, Mitchell offers more versatility in the return game.

The 49ers liked what they saw from Josh Hokit in the first two preseason games without Juice Check in the mix. However, there’s no room for a second fullback in today’s NFL. The hope here is that Hokit makes it back to San Francisco’s 16-man practice squad.

San Francisco opted to release wide receiver turned tight end Jordan Matthews on Tuesday. There’s a chance he returns on the practice squad after showing himself well at that new position during the summer. The decision to go with three tight ends is a bit different from previous years under Kyle Shanahan. It seems to suggest that the 49ers are happy with Dwelley and Woerner as the backups for Kittle.

This was among the most-interesting position groups for San Francisco during training camp and the preseason. Sherfield showed out big time and acted the part of the 49ers’ most-productive receiver. That guaranteed him a spot on the 53-man roster.

As for Jalen Hurd, he missed more time to injury after sitting out each of his first two NFL seasons. After getting extensive action in San Francisco’s preseason finale, Hurd surprisingly earned a spot on the 53.

By keeping both Hurd and Jennings, the 49ers are also in a less-than-stellar situation in the return game. Right now, Aiyuk would seem to be the top punt returner. Given his status as San Francisco’s No. 1 receiver, that seems unlikely. Look for this to be an area the 49ers address ahead of Week 1 against Detroit.

Here’s another area the 49ers might address. The surprising release of 2020 fifth-round pick Colton McKivitz changes the dynamics a tad. He’ll be replaced by rookie Jaylon Moore in the swing tackle role after the latter impressed big time during training camp and the preseason. Moore’s lack of experience could play a role should either Williams or McGlinchey miss time to injury.

Much to the chagrin of fans in Northern California, the 49ers opted to keep Compton on their initial 53-man roster. The 32-year-old veteran will be a major downgrade should either Tomlinson or Brunksill go down to an injury. Meanwhile, Banks missed a ton of time during the summer to injury after San Francisco made the former Notre Dame All-American a surprise second-round pick.

Unlike other positions, I expect San Francisco to scour the waiver wire, free agency and the trade block to find another guard. It can’t go into Week 1 with this as the depth chart.

A free-agent signing from the Atlanta Falcons this past spring, Mack has missed just two games of action over the past six seasons. Despite his advanced age of 35, San Francisco has confidence that the six-time Pro Bowler will remain healthy. With that said, there’s a decent chance Jake Brendel returns either on the practice squad or active roster after being waived on Tuesday.

Initially, the 49ers will have 11 defensive linemen on their 53-man roster. That will change once Maurice Hurst is placed on injured reserve with a high-ankle sprain. There’s also a chance that another player will be dealt ahead of Week 1 with other teams calling up San Francisco about potential trades.

As it stands, this might be among the deepest units in the entire NFL. Nick Bosa and Dee Ford seem to be 100% after playing in a combined three games last season. Javon Kinlaw showed out in his second preseason with the 49ers. Samson Ebukam seems to be a tremendous EDGE rush threat after coming over from the Los Angeles Rams in free agency. Heck, Zach Kerr is a starter-caliber player taking the field with the second and third unit. It will be interesting to see how the 49ers’ defensive line takes shape moving forward.

The 49ers’ decision to trade Jonas Griffith on Tuesday opened the door for Marcell Harris to earn a spot on the 53-man roster. The former late-round pick is making the transition from safety and has performed well during the summer. Harris also gives San Francisco flexibility on special teams.

Of course, it all starts with All-Pro Fred Warner and talented youngster Dre Greenlaw. If they remain healthy and perform well, this will be one of the best linebackers groups in the NFL.

To say that it was surprising that San Francisco opted to keep Harris over Dontae Johnson would be an understatement. The 49ers wanted experience with two rookie slated to play roles at cornerback. Even then, we can expect another move at this position ahead of Week 1.

There’s a darn good chance that Ha Ha Clinton-Dix will return to the 49ers’ practice squad after being released on Tuesday. The former Pro Bowler came up with an interception in Sunday’s preseason finale against the Las Vegas Raiders and could provide experience. For now, the 49ers will likely rely on Hufanga to an extent. The rookie fifth-round pick from USC was among the most-impressive figures in Santa Clara during the summer.

GREENVILLE, N.C.--(BUSINESS WIRE)--Employers aiming to win the war on talent have a new “A” team to tap into: college and professional athletes. … END_OF_DOCUMENT_TOKEN_TO_BE_REPLACED

Mortgage rates are likely to rise in July, extending a seven-month streak. High inflation, and the Federal Reserve's efforts to control it, have … END_OF_DOCUMENT_TOKEN_TO_BE_REPLACED