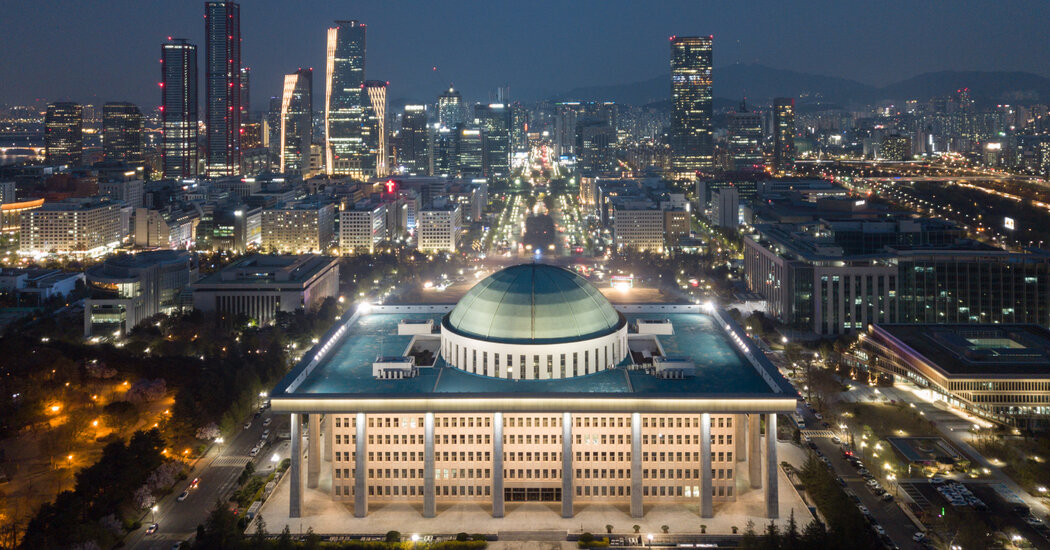 WASHINGTON — For months, Apple and Google have been fighting a bill in the South Korean legislature that they say could imperil their lucrative app store businesses. The companies have appealed directly to South Korean lawmakers, government officials and the public to try to block the legislation, which is expected to face a crucial vote this week.

The companies have also turned to an unlikely ally, one that is also trying to quash their power: the United States government. A group funded by the companies has urged trade officials in Washington to push back on the legislation, arguing that targeting American firms could violate a joint trade agreement.

The South Korean legislation would be the first law in the world to require companies that operate app stores to let users in Korea pay for in-app purchases using a variety of payment systems. It would also prohibit blocking developers from listing their products on other app stores.

How the White House responds to this proposal poses an early test for the Biden administration: Will it defend tech companies facing antitrust scrutiny abroad while it applies that same scrutiny to the companies at home?

executive order to spur competition in the industry, and his top two antitrust appointees have long been vocal critics of the companies.

The approach the White House chooses may have widespread implications for the industry, and for the shape of the internet around the world. A growing number of countries are pursuing stricter regulations on Google, Apple, Facebook and Amazon, fragmenting the rules of the global internet.

American officials have echoed some of the industry’s complaints about the proposal, saying in a March report it appeared to target American companies. But trade officials have yet to take a formal position on it, said Adam Hodge, a spokesman for the United States Trade Representative. He said officials were still considering how to balance the claim that the legislation discriminates against American companies with the belief among tech critics in South Korea and America that the legislation would level the playing field.

“We are engaging a range of stakeholders to gather facts as legislation is considered in Korea, recognizing the need to distinguish between discrimination against American companies and promoting competition,” Mr. Hodge said in a statement.

Apple said that it regularly dealt with the United States government on a range of topics. During those interactions it discussed the South Korean app store legislation with American officials, including at the U. S. Embassy in Seoul, the company said in a statement.

The company said the legislation would “put users who purchase digital goods from other sources at risk of fraud, undermine their privacy protections, make it difficult to manage their purchases” and endanger parental controls.

A Google spokeswoman, Julie Tarallo McAlister, said in a statement that Google was open to “exploring alternative approaches” but believed the legislation would harm consumers and software developers.

The proposal was approved by a committee in the Korean National Assembly last month, over the opposition of some in the Korean government. It could get a vote in the body’s judiciary committee as soon as this week. It would then require a vote from the full assembly and the signature of President Moon Jae-in to become law.

The proposal would have a major impact on Apple’s App Store and the Google Play Store.

The Google store accounted for 75 percent of global app downloads in the second quarter of 2021, according to App Annie, an analytics company. Apple’s marketplace accounted for 65 percent of consumer spending on in-app purchases or subscriptions.

One way software developers make money is by selling products directly in their apps, like Fortnite’s in-game currency or a subscription to The New York Times. Apple has insisted for years that developers sell those in-app products through the company’s own payment system, which takes up to a 30 percent cut of many sales. Last year, Google indicated it would follow suit by applying a 30 percent cut to more purchases than it had in the past. Developers say that the fees are far too steep.

After South Korean lawmakers proposed the app store bill last year, the Information Technology Industry Council, a Washington-based group that counts Apple and Google as members, urged the United States Trade Representative to include concerns about the legislation in an annual report highlighting “barriers” to foreign trade. The group said in October that the rules could violate a 2007 accord that says neither country can discriminate against firms with headquarters in the other.

Apple said that it was not unusual for an industry group to provide feedback to the trade representative. The company said the government had explicitly asked for comment on potentially discriminatory laws. In a statement, Naomi Wilson, the trade group’s vice president of policy for Asia, said that it encouraged “legislators to work with industry to re-examine the obligations for app markets set forth in the proposed measure to ensure they are not trade-restrictive and do not disproportionately affect” American companies.

When the trade representative’s report was published in March — just weeks after Mr. Biden’s nominee to the position was sworn in — it included a paragraph that echoed some of the tech group’s concerns. The report concluded that the South Korean law’s “requirement to permit users to use outside payment services appears to specifically target U.S. providers and threatens a standard U.S. business model.”

The American report did not say the law would violate the free trade agreement with South Korea. But in July, the managing director of a group called the Asia Internet Coalition, which lists Apple and Google as two of its members, pointed to the report when he told Korea’s trade minister that the law “could provoke trade tensions between the United States and South Korea.”

“The Biden administration has already signaled its concerns,” the director said in a written comment in July.

American diplomats in Seoul also raised questions about whether the legislation could cause trade tensions.

“Google said something like that, and a similar opinion was expressed by the U.S. Embassy in Korea,” said Jo Seoung Lae, a lawmaker who backs the legislation. He added that the embassy had been in touch with his staff throughout June and July. Park Sungjoong, another lawmaker, also said that the embassy had expressed trade concerns about the law.

Mr. Jo said that a Google representative had visited his office to express opposition to the proposal, and that Apple had also “provided their feedback” opposing the legislation.

Mr. Jo said that he had requested that the United States provide its official position, but he said he had not received one yet.

American trade officials sometimes defend companies even when they are criticized by others in the administration. While former President Donald J. Trump attacked a liability shield for social media platforms, known as Section 230, his trade representative wrote a similar provision into agreements with Canada, Mexico and Japan.

But Wendy Cutler, a former official who negotiated the trade agreement between South Korea and the United States, said that it would be difficult for America to argue that the Korean rules violate trade agreements when the same antitrust issues are being debated stateside.

“You don’t want to be calling out a country for potentially violating an obligation when at the same time your own government is questioning the practice,” said Ms. Cutler, now the vice president at the Asia Society Policy Institute. “It weakens the case substantially.”

South Korean and American app developers have run their own campaign for the new rules, arguing it would not trigger trade tensions.

In June, Mark Buse, the top lobbying executive at the dating app company Match Group and a former board member of a pro-regulation group called the Coalition for App Fairness, wrote to Mr. Jo, the Korean lawmaker, supporting the proposal. He said that the Biden administration knew about concerns around the tech giants, making trade tensions less likely.

Mr. Buse, who traveled to Seoul this month to press the case for the legislation on behalf of the Coalition for App Fairness, made it clear that his employer considered it a high-stakes debate. He listed the many other countries where officials were concerned about Apple’s and Google’s practices.

“And all of this,” he said, “is following the leadership that the Korean assembly is showing.”

The union movement that kicked off across the country more than a year ago has continued its momentum in 2022, with workers in warehouses, coffee … END_OF_DOCUMENT_TOKEN_TO_BE_REPLACED

Keep up! Reality TV star Kim Kardashian has splurged on a cliffside mansion in Malibu, CA, that was once owned by Cindy Crawford and Rande … END_OF_DOCUMENT_TOKEN_TO_BE_REPLACED