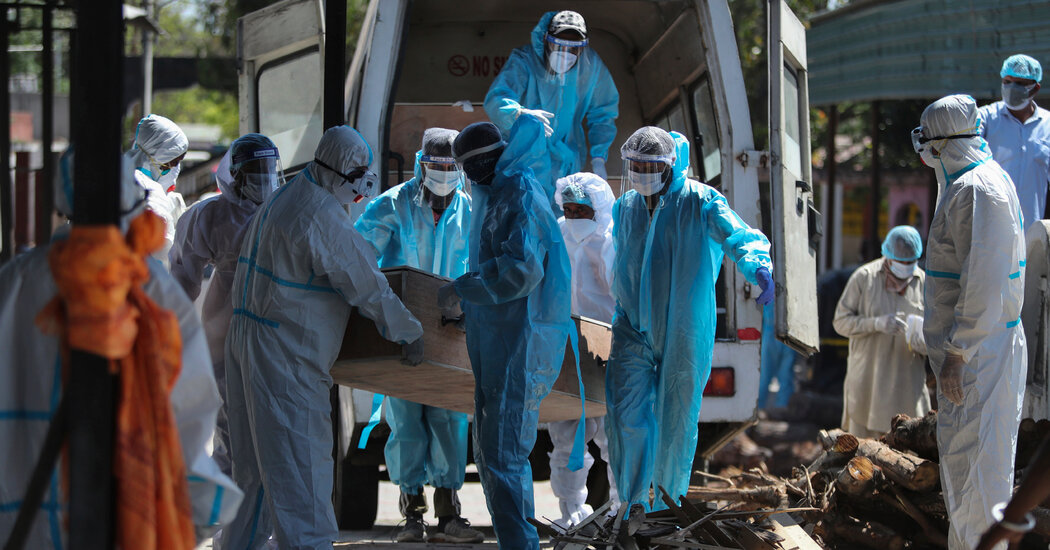 NEW DELHI — With a devastating second wave of Covid-19 sweeping across India and lifesaving supplemental oxygen in short supply, India’s government on Sunday said it ordered Facebook, Instagram and Twitter to take down dozens of social media posts critical of its handling of the pandemic.

The order was aimed at roughly 100 posts that included critiques from opposition politicians and calls for Narendra Modi, India’s prime minister, to resign. The government said that the posts could incite panic, used images out of context, and could hinder its response to the pandemic.

The companies complied with the requests for now, in part by making the posts invisible to those using the sites inside India. In the past, the companies have reposted some content after determining that it didn’t break the law.

The takedown orders come as India’s public health crisis spirals into a political one, and set the stage for a widening struggle between American social media platforms and Mr. Modi’s government over who decides what can be said online.

are probably much higher. The country now accounts for almost half of all new cases globally. Its health system appears to be teetering. Hospitals across the country have scrambled to get enough oxygen for patients.

In New Delhi, the capital, hospitals this weekend turned away patients after running out of oxygen and beds. Last week, at least 22 patients were killed in a hospital in the city of Nashik, after a leak cut off their oxygen supplies.

Online photos of bodies on plywood hospital beds and the countless fires of overworked crematories have gone viral. Desperate patients and their families have pleaded online for help from the government, horrifying an international audience.

On Sunday evening, in one of many pleas for help on social media, Ajay Koli took to Twitter to find an oxygen cylinder in Delhi for his mother, who, he said, had tested positive 10 days ago. Mr. Koli said he lost his father on Saturday. “I don’t want to lose my mom now.”

risks of loosening restrictions, after he held large political rallies with little regard for social distancing. Some of the content now offline in India highlighted that contradiction, using lurid images to contrast Mr. Modi’s rallies with the flames of funeral pyres.

deepen a conflict between American social media platforms and Mr. Modi’s government. The two sides have tussled in recent months over a push by India’s government to more strictly police what is said online, a policy that critics say is being used to silence government detractors.

“This has been a trend, which is enforced with increasing frequency and severity for online media spaces,” said Apar Gupta, the executive director of the Internet Freedom Foundation, a digital rights group. He added that the orders were being used to “cause censorship” under the guise of making social media companies more “accountable.”

broader conflict playing out globally. Governments across the world have been seeking to rein in the power of the largest tech companies, like Twitter and Facebook, whose policies have huge political impact far from their California headquarters. In the best of cases, it can be difficult to disentangle government efforts to tamp down misinformation from other motivations, like tilting online debate in one political party’s favor.

While the companies seek to hew to policies that they say are based on the principles of free speech, their responses to government power plays have been inconsistent and often based on business pragmatism. In Myanmar, Facebook cut business ties with military-linked accounts over violence against protesters. In China, Facebook does brisk business with state-backed media groups that have been busy denying the widespread internment of ethnic minorities, which the United States has labeled a genocide.

increasingly aggressive at stifling dissent. It has arrested activists and journalists, and pressured media organizations to hew to its line. It has cut off mobile internet access in troubled areas. After a standoff with China, it blocked a number of apps owned by Chinese companies.

In February, Twitter relented in the face of government threats to arrest its employees, and blocked 500 accounts after the government accused them of making inflammatory remarks about Mr. Modi. Twitter declined, however, to remove a number of journalists’ and politicians’ accounts, pointing out that the orders to block them did not appear to be consistent with Indian law.

In a Sunday statement, India’s government said the posts it targeted “spread fake or misleading information” and created “panic about the Covid-19 situation in India by using unrelated, old and out of the context images or visuals.” It pointed to photos in several posts that it said were of bodies unrelated to the recent outbreak.

wrote Mahua Moitra, a politician and member of parliament from West Bengal.

Aftab Alam, a professor at the University of Delhi was more direct.

“Because you know it’s easier to take down tweets than it is to ensure oxygen supplies,” he wrote on Twitter.

Whether you optimistically hope that mortgage rates will decline or are resigned that rates will stay elevated above the historic lows of 2021, you … END_OF_DOCUMENT_TOKEN_TO_BE_REPLACED

A resident of Nikopol, Ukraine, in her backyard last month, with smoke rising from an area on the opposite bank of the Dnipro River. Credit...David … END_OF_DOCUMENT_TOKEN_TO_BE_REPLACED