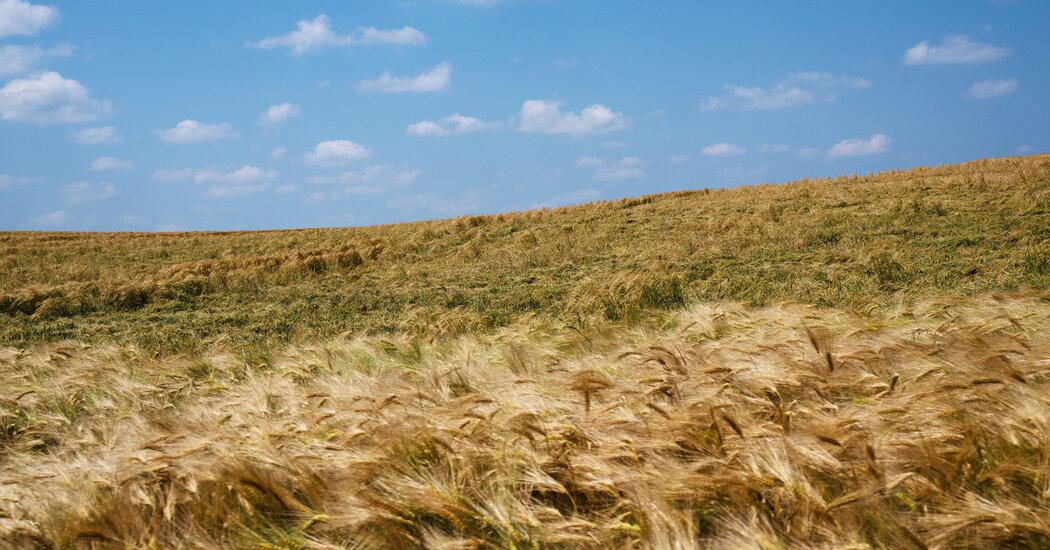 Stopping at the edge of a vast field of barley on his farm in Prundu, 30 miles outside Romania’s capital city of Bucharest, Catalin Corbea pinched off a spiky flowered head from a stalk, rolled it between his hands, and then popped a seed in his mouth and bit down.

“Another 10 days to two weeks,” he said, explaining how much time was needed before the crop was ready for harvest.

Mr. Corbea, a farmer for nearly three decades, has rarely been through a season like this one. The Russians’ bloody creep into Ukraine, a breadbasket for the world, has caused an upheaval in global grain markets. Coastal blockades have trapped millions of tons of wheat and corn inside Ukraine. With famine stalking Africa, the Middle East and elsewhere in Asia, a frenetic scramble for new suppliers and alternate shipping routes is underway.

barge that had sunk in World War II.

Rain was not as plentiful in Prundu as Mr. Corbea would have liked it to be, but the timing was opportune when it did come. He bent down and picked up a fistful of dark, moist soil and caressed it. “This is perfect land,” he said.

67.5 million tons of cargo, more than a third of it grain. Now, with Odesa’s port closed off, some Ukrainian exports are making their way through Constanta’s complex.

Railway cars, stamped “Cereale” on their sides, spilled Ukrainian corn onto underground conveyor belts, sending up billowing dust clouds last week at the terminal operated by the American food giant Cargill. At a quay operated by COFCO, the largest food and agricultural processor in China, grain was being loaded onto a cargo ship from one of the enormous silos that lined its docks. At COFCO’s entry gate, trucks that displayed Ukraine’s distinctive blue-and-yellow-striped flag on their license plates waited for their cargoes of grain to be inspected before unloading.

During a visit to Kyiv last week, Romania’s president, Klaus Iohannis, said that since the beginning of the invasion more than a million tons of Ukrainian grain had passed through Constanta to locations around the world.

But logistical problems prevent more grain from making the journey. Ukraine’s rail gauges are wider than those elsewhere in Europe. Shipments have to be transferred at the border to Romanian trains, or each railway car has to be lifted off a Ukrainian undercarriage and wheels to one that can be used on Romanian tracks.

Truck traffic in Ukraine has been slowed by backups at border crossings — sometimes lasting days — along with gas shortages and damaged roadways. Russia has targeted export routes, according to Britain’s defense ministry.

Romania has its own transit issues. High-speed rail is rare, and the country lacks an extensive highway system. Constanta and the surrounding infrastructure, too, suffer from decades of underinvestment.

Over the past couple of months, the Romanian government has plowed money into clearing hundreds of rusted wagons from rail lines and refurbishing tracks that were abandoned when the Communist regime fell in 1989.

Still, trucks entering and exiting the port from the highway must share a single-lane roadway. An attendant mans the gate, which has to be lifted for each vehicle.

When the bulk of the Romanian harvest begins to arrive at the terminals in the next couple of weeks, the congestion will get significantly worse. Each day, 3,000 to 5,000 trucks will arrive, causing backups for miles on the highway that leads into Constanta, said Cristian Taranu, general manager at the terminals run by the Romanian port operator Umex.

Mr. Mircea’s farm is less than a 30-minute drive from Constanta. But “during the busiest periods, my trucks are waiting two, three days” just to enter the port’s complex so they can unload, he said through a translator.

That is one reason he is less sanguine than Mr. Corbea is about Romania’s ability to take advantage of farming and export opportunities.

“Port Constanta is not prepared for such an opportunity,” Mr. Mircea said. “They don’t have the infrastructure.”

Whether you optimistically hope that mortgage rates will decline or are resigned that rates will stay elevated above the historic lows of 2021, you … END_OF_DOCUMENT_TOKEN_TO_BE_REPLACED

A resident of Nikopol, Ukraine, in her backyard last month, with smoke rising from an area on the opposite bank of the Dnipro River. Credit...David … END_OF_DOCUMENT_TOKEN_TO_BE_REPLACED