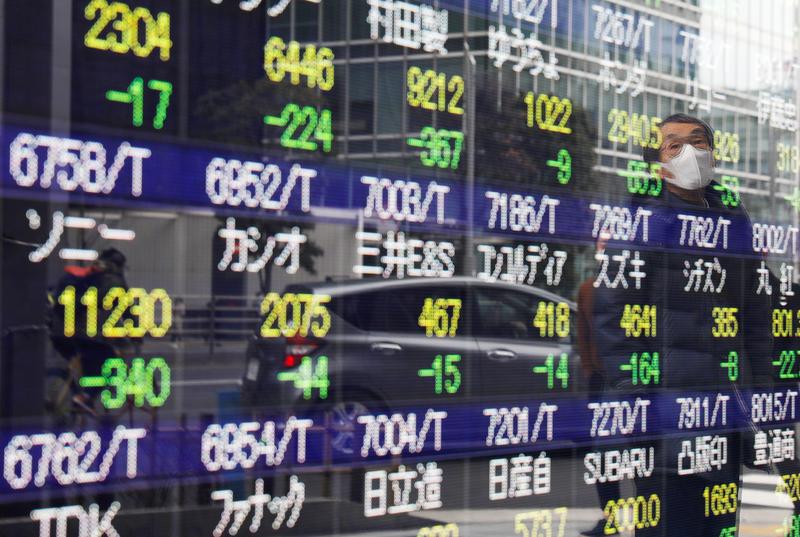 TOKYO/NEW YORK (Reuters) – Asian stocks extended their rebound from a two-month low on Thursday after a report on U.S. consumer prices calmed concerns about inflation and lifted the Dow Jones Industrial Average to a record close.

An index of regional stocks excluding Japan rose 1.7%, led by a 2.3% surge in South Korea’s Kospi, and was on track for its first three-day advance in three weeks.

Relative calm in the Treasuries market also helped risk sentiment, with the benchmark yield settling at around 1.5% after shooting to a one-year high above 1.6% last week as investors worried about the U.S. economic recovery running too hot.

“The market took a bit of relief from this consolidation in rates,” said Masahiko Loo, a Tokyo-based portfolio manager at AllianceBernstein.

“The vaccine optimism is still there. People are coming back into the workforce. If you add everything up — and the bond market is not being disruptive — it’s providing more incentive for investors to buy equities.”

Europe looked set to continue the global rally with Euro Stoxx 50 futures 0.2% higher after the index touched a more than one-year top on Wednesday.

The European Central Bank sets its policy on Thursday and is likely to signal faster money printing to keep a lid on borrowing costs, although it will stop short of adding firepower to its already aggressive pandemic-fighting package.

Britain’s FTSE futures rose about 0.4%. MSCI’s gauge of stocks across the globe gained 0.28%.

The U.S. Labor Department said its consumer price index rose 0.4% in February, in line with expectations, after a 0.3% increase in January. Core CPI, which excludes volatile food and energy components, edged up 0.1%, just shy of the 0.2% estimate.

While analysts largely expect a hike in inflation as vaccine rollouts lead to a reopening of the economy, worries persist that additional stimulus in the form of a $1.9 trillion coronavirus relief package set to be signed by U.S. President Joe Biden could overheat the economy.

“Rises in U.S. bond yields appear to have subsided a bit after the 10-year yield has reached 1.5%, even though many investors remain cautious before the Fed’s policy meeting,” said Naoya Oshikubo, senior economist at Sumitomo Mitsui Trust Asset Management.

“The Fed has ratcheted up its rhetoric on bond yields lately. The reality is, the economy is in a K-shaped recovery, with the service sector still in difficult conditions and the Fed would probably not want to let real interest rates rise.”

The dollar index was almost unchanged at 91.813, following a 0.2% drop overnight.

KRASNIK, Poland — When local councilors adopted a resolution two years ago declaring their small town in southeastern Poland “free of L.G.B.T.,” the … END_OF_DOCUMENT_TOKEN_TO_BE_REPLACED