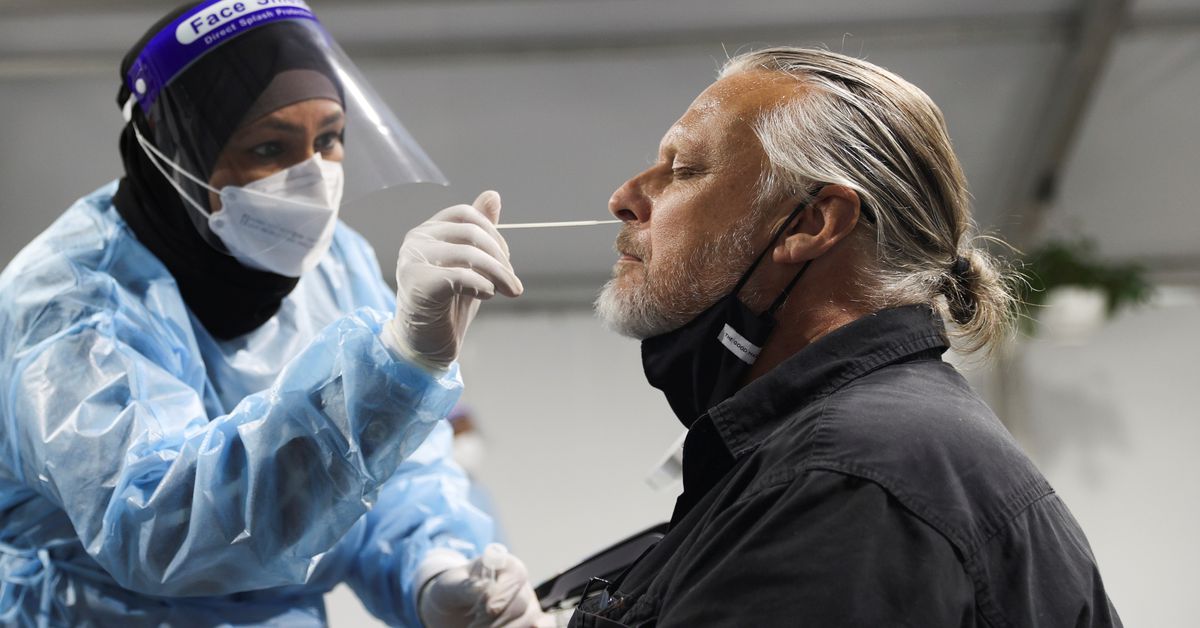 A traveller receives a test for the coronavirus disease (COVID-19) at a pre-departure testing facility, as countries react to the new coronavirus Omicron variant, outside the international terminal at Sydney Airport in Sydney, Australia, November 29, 2021. REUTERS/Loren Elliott

The death, a man in his 80s with underlying health conditions, marked a grim milestone for the country which has had to reverse some parts of a staged reopening after nearly two years of stop-start lockdowns, due to the fresh outbreak.

Omicron, which health experts say appears more contagious but less virulent than previous strains, began to spread in the country just as it lifted restrictions on most domestic borders and allowed Australians to return from overseas without quarantine, driving case numbers to the highest of the pandemic.

The authorities gave no additional details about the Omicron death, except to say that the man caught the virus at an aged care facility and died in a Sydney hospital.

“This was the first known death in New South Wales (state) linked to the Omicron variant of concern,” said NSW Health epidemiologist Christine Selvey in a video released by the government.

The man was among seven COVID-19 deaths reported in Australia the previous day. The country clocked 10,186 new cases nationwide, according to a Reuters calculation of state data, its first total over 10,000 since the start of the pandemic. Most new cases were in NSW and Victoria.

“Although we are seeing increased case numbers… we are not seeing the impacts on our hospital system,” said Annastacia Palaszczuk, premier of Queensland which reported 784 new cases with four people in hospital.

With reports of six-hour wait times for COVID testing for people hoping to meet requirements for interstate holiday travel, Palaszczuk defended the tourism-friendly state for mandatory testing, saying “everyone knew when they booked a ticket that if they wanted to come here they would have to do a PCR test”.

However, she added that Queensland was considering whether to relax testing requirements for domestic visitors. Tasmania, another tourist-popular state, also said it was considering changes to state border testing rules.

Around the country, the surge in infections meanwhile weighed on testing resources. Sydney testing clinic SydPath had confirmed a day earlier that it wrongly told 400 COVID-positive people they were negative in the days before Christmas; on Monday it now realised it sent wrong result messages to another 995 people.

Australian authorities have so far resisted a return to lockdown in the face of surging case numbers but have reinstated some restrictions. On Monday, NSW again made it compulsory to check into public venues with QR codes, while many states have brought back mandatory mask-wearing in indoor public places.

The country has also narrowed the window for vaccine booster shots from six months to four months, soon to be three months.

You have to go back to the start of the coronavirus pandemic to find mortgage rates as high as they are this week.According to the latest data … END_OF_DOCUMENT_TOKEN_TO_BE_REPLACED