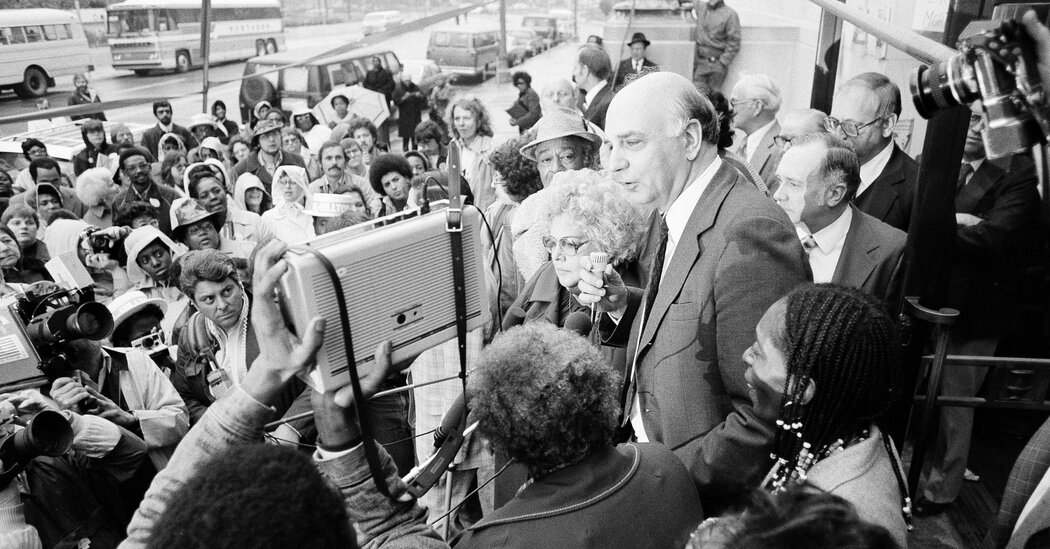 The Federal Reserve’s decision to raise interest rates again is hardly a positive development for anyone with a job, a business or an investment in the stock or bond market.

But it isn’t a great shock, either.

This is all about curbing inflation, which is running at 8.3 percent annually, near its highest rate in 40 years. On Wednesday, the Fed raised the short-term federal funds rate for a third consecutive time, to 3.25 percent, and said it would keep increasing it.

“We believe a failure to restore price stability would mean far greater pain later on,” Jerome H. Powell, the Fed chair, said. He acknowledged that the Fed’s rate increases would raise unemployment and slow the economy.

last time severe inflation tested the mettle of the Federal Reserve was the era of Paul A. Volcker, who became Fed chair in August 1979, when inflation was already 11 percent and still rising. He managed to bring it below 4 percent by 1983, but at the cost of two recessions, sky-high unemployment and horrendous volatility in financial markets.

around 6 percent — and had set the country on a path toward price stability that lasted for decades.

The Great Moderation.” This halcyon period lasted long after he left the Fed, and ended only with the financial crisis of 2007-9. As the Fed now puts it on a website devoted to its history, “Inflation was low and relatively stable, while the period contained the longest economic expansion since World War II.”

Donald Kohn, a senior fellow at the Brookings Institution in Washington, was a Fed insider for 40 years, and retired as vice chair in 2010. With his inestimable guidance, I plunged into Fed history during the Volcker era.

I found an astonishing wealth of material, providing far more information than reporters had access to back then. In fact, while the current Fed provides vast reams of data, what goes on behind closed doors is better documented, in some respects, for the Volcker Fed.

That’s because transcripts of Fed meetings from that period were reconstructed from recordings that, Mr. Kohn said, “nobody was thinking about as they were talking because nobody knew about them or expected that this would ever be published, except, I guess Volcker.” By the 1990s, when the Fed began to produce transcripts available on a five-year time delay, Mr. Kohn said, participants in the meetings “were aware they were being recorded for history, so we became more restrained in what we said.”

So reading the Volcker transcripts is like being a fly on the wall. Some names of foreign officials have been scrubbed, but most of the material is there.

In a phone conversation, Mr. Kohn identified two critical “Volcker moments,” which he discussed at a Dallas Federal Reserve conference in June. “In both cases, the Fed moved in subtle ways and surprised people by changing its focus and its approach,” he said.

For Fed watchers, the change in the central bank’s emphasis had practical implications. Richard Bernstein, a former chief investment strategist at Merrill Lynch who now runs his own firm, said that back then: “You needed a calculator to figure out the numbers being released by the Fed. By comparison, now, there are practically no numbers. You just need to look at the words of Fed statements.”

The Fed as Psychologist

The Fed’s methods of dealing with inflation are abstruse stuff. But its conversations about the problem in 1982 were pithy, and its decisions appeared to be based as much on psychology as on traditional macroeconomics.

As Mr. Volcker put it at a Federal Open Market Meeting on Oct. 6, 1979, “I have described the state of the markets as in some sense as nervous as I have ever seen them.” He added: “We are not dealing with a stable psychological or stable expectational situation by any means. And on the inflation front, we‘re probably losing ground.”

17 percent by March 1980. The Fed plunged the economy into one recession and then, when the first one failed to curb inflation sufficiently, into a second.

unemployment rate stood at 10.8 percent, a postwar high that was not exceeded until the coronavirus recession of 2020. But in 1982, even people at the Fed were wondering when the economy would begin to recover from the damage that had been done.

The fall of 1982 was the second “Volcker moment” discerned by Mr. Kohn, who was in the room during meetings. The Fed decided that inflation was coming down — although in September 1982, it was still in the 6 to 7 percent range. The economy was contracting sharply, and the extraordinarily high interest rates in the United States had ricocheted around the world, worsening a debt crisis in Mexico, Argentina and, soon, the rest of Latin America.

Fed meeting that October, when one official said, “There have certainly been some other problem situations” in Latin America, Mr. Volcker responded, “That’s the understatement of the day, if I must say so.”

Penn Square Bank in Oklahoma had collapsed, a precursor of other failures to come.

“We are in a worldwide recession,” Mr. Volcker said. “I don’t think there’s any doubt about that.” He added: “I don’t know of any country of any consequence in the world that has an expansion going on. And I can think of lots of them that have a real downturn going on. Obviously, unemployment is at record levels. It is rising virtually everyplace. In fact, I can’t think of a major country that is an exception to that.”

It was time, he and others agreed, to provide relief.

The Fed needed to make sure that interest rates moved downward, but the method of targeting the monetary supply wasn’t working properly. It could not be calibrated precisely enough to guarantee that interest rates would fall. In fact, interest rates rose in September 1982, when the Fed had wanted them to drop. “I am totally dissatisfied,” Mr. Volcker said.

It was, therefore, time, to shift the Fed’s focus back to interest rates, and to resolutely lower them.

This wasn’t an easy move, Mr. Kohn said, but it was the right one. “It took confidence and some subtle judgment to know when it was time to loosen conditions,” he said. “We’re not there yet today — inflation is high and it’s time to tighten now — but at some point, the Fed will have to do that again.”

The Fed pivot in 1982 had a startling payoff in financial markets.

As early as August 1982, policymakers at the central bank were discussing whether it was time to loosen financial conditions. Word trickled to traders, interest rates fell and the previously lackluster S&P 500 started to rise. It gained nearly 15 percent for the year and kept going. That was the start of a bull market that continued for 40 years.

In 1982, the conditions that set off rampant optimism in the stock market didn’t happen overnight. The Volcker-led Fed had to correct itself repeatedly while responding to major crises at home and abroad. It took years of pain to reach the point at which it made sense to pivot, and for businesses to start rehiring workers and for traders to go all-in on risky assets.

Today, the Fed is again engaging in a grand experiment, even as Russia’s war in Ukraine, the lingering pandemic and political crises in the United States and around the globe are endangering millions of people.

When will the big pivot happen this time? I wish I knew.

The best I can say is that it would be wise to prepare for bad times but to plan and invest for prosperity over the long haul.

I’ll come back with more detail on how to do that.

But I would try to stay invested in both the stock and bond markets permanently. The Volcker era demonstrates that when the moment has at last come, sea changes in financial markets can occur in the blink of an eye.

SHERMAN OAKS, Calif.--(BUSINESS WIRE)--When it comes to choosing a property management company, the size of a company often becomes a sticking point … END_OF_DOCUMENT_TOKEN_TO_BE_REPLACED

An alternative way to get Original Medicare coverage, Medicare Advantage plans offer coverage that is equal to or greater than that of Medicare Parts … END_OF_DOCUMENT_TOKEN_TO_BE_REPLACED