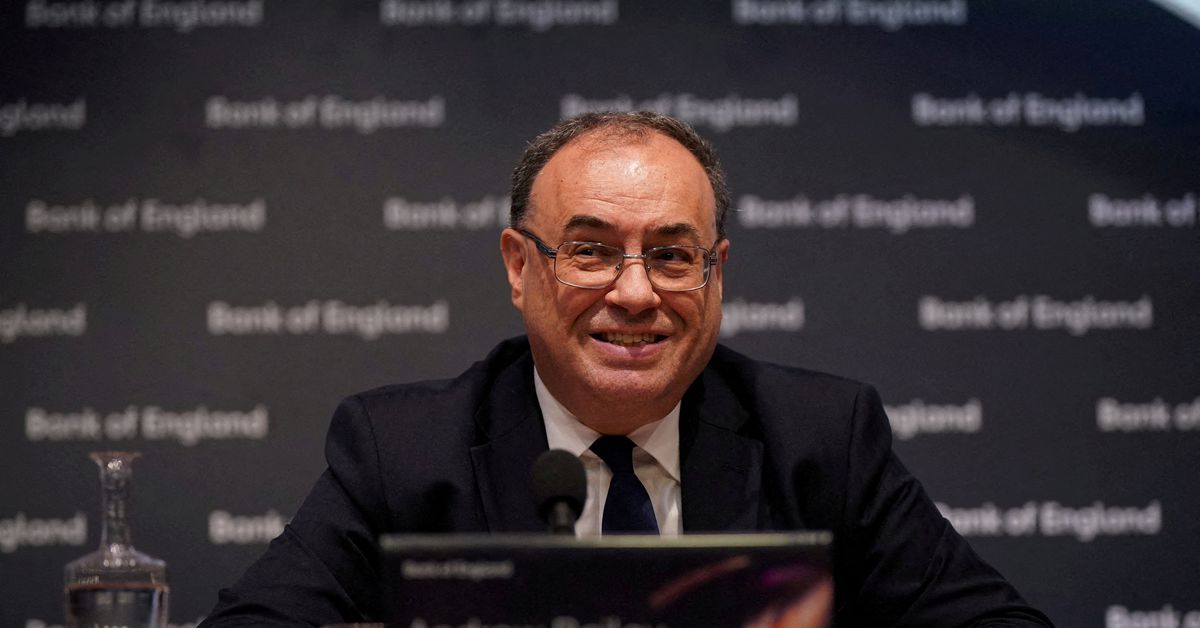 WASHINGTON, Oct 15 (Reuters) – Bank of England Governor Andrew Bailey said there was an “immediate meeting of minds” when he spoke with finance minister Jeremy Hunt about the need to fix the public finances after the tax cut plans of Hunt’s predecessor unleashed market turmoil.

Bailey, speaking in Washington where British officials attending International Monetary Fund meetings have been put on the spot about the crisis engulfing the country, said he had spoken to Hunt on Friday after he replaced Kwasi Kwarteng.

“Of course there was an important measure taken yesterday,” he said at an event where he also hinted at a big interest rate rise by the central bank next month.

Prime Minister Liz Truss, seeking to save her term in office which is barely a month old, said on Friday that Britain’s corporation tax rate would increase, reversing a key pledge made during her bid for Downing Street.

Hunt said earlier on Saturday that some taxes might have to rise and others might not fall as much as planned, signalling a further shift away from Truss’s original plans.

Bailey, speaking at an event organised by the Group of Thirty, which comprises financiers and academics, welcomed the role that Britain’s independent budget watchdog would have in assessing the budget plan that Hunt will publish on Oct. 31.

The Office for Budget Responsibility was not tasked with weighing up the impact of Kwarteng’s “mini-budget” which set off a slump in the value of the pound and government bonds when he announced it on Sept. 23.

“Flying blind is not a way to achieve sustainability,” Bailey said.

Truss criticised the BoE during her leadership campaign, saying she wanted to set a “clear direction of travel” for the central bank. BoE officials pushed back at those comments saying their independence was key to managing the economy.

Bailey said the BoE might raise interest rates by more than it previously thought because of the government’s huge energy bill support – which could lower inflation in the short term but push it up further ahead – and whatever it decides to do on tax cuts and spending.

“We will not hesitate to raise interest rates to meet the inflation target,” Bailey said. “And, as things stand today, my best guess is that inflationary pressures will require a stronger response than we perhaps thought in August.”

The BoE raised rates by half a percentage point in August – at the time its biggest increase in 27 years – and then did so again in September with inflation around 10%, far above the BoE’s target of 2%.

It is due to announce its next decision on Nov. 3 and many investors think it will either raise them from their current level of 2.25% to 3% or possibly 3.25%.

In the shorter term, the BoE will be keeping a close eye on how financial markets behave on Monday after it ended its emergency bond-buying programme on Friday.

Bailey said the now-completed intervention was “not about steering market yields towards some particular level, but rather preventing them from being distorted by market dysfunction”.

He said the BoE had acted after the violent market moves which exposed the “flaws in the strategy and structure” of a lot of pension funds.

The intervention was different to the much bigger and longer-running bond-buying that the BoE undertook during the coronavirus pandemic and earlier as a monetary policy tool.

“In these difficult times, we need to be very clear on this framework of intervention,” Bailey said.

Reporting by Howard Schneider in Washington and William Schomberg in London; Additional reporting by Michael Holden in London; Editing by David Clarke

Covers the U.S. Federal Reserve, monetary policy and the economy, a graduate of the University of Maryland and Johns Hopkins University with previous experience as a foreign correspondent, economics reporter and on the local staff of the Washington Post.

AUSTIN, Texas--(BUSINESS WIRE)--As the first multifamily management company to be recognized in the Public Relations and Marketing Excellence Awards, … END_OF_DOCUMENT_TOKEN_TO_BE_REPLACED

There have been whispers of cooling housing and rental prices in the San Francisco Bay Area, but that hasn't yet translated into practical, noticeable … END_OF_DOCUMENT_TOKEN_TO_BE_REPLACED

Cars pass in Independence Square at twilight in Kyiv, Ukraine, Monday, Oct. 31, 2022. Rolling ... [+] blackouts are increasing across Ukraine as the … END_OF_DOCUMENT_TOKEN_TO_BE_REPLACED