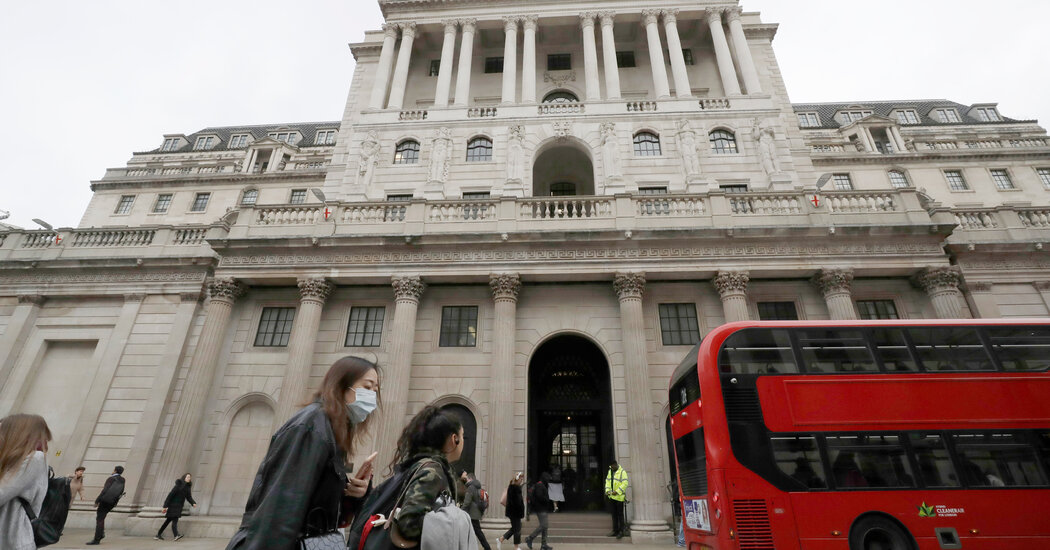 The Bank of England unveiled a much brighter outlook for the British economy on Thursday, saying it would return to its prepandemic levels at the end of this year as lockdowns ended, consumers spent billions of pounds in extra savings and the vaccine rollout reduced public health worries.

The central bank, in its quarterly monetary report, raised its growth forecasts and slashed its predictions for unemployment. The British economy is now projected to grow 7.25 percent this year, compared to a forecast of 5 percent growth three months ago. This would be the fastest pace of expansion for the economy since official records began in 1949, pulling Britain out of its worst recession in three centuries.

The higher forecast comes after the government has announced tens of billions of pounds in additional spending to see workers and businesses through the summer, and outlined its plan to end lockdown restrictions by late June.

Britain’s economic output “recovers strongly over the course of 2021, albeit only back to pre-Covid levels,” Andrew Bailey, the governor of the Bank of England, said in a news conference on Thursday.

“Of course, there remains uncertainty around how the pandemic might evolve and so there are risks around this projection, including from renewed waves of infections in the U.K. and other countries,” he said.

He added that there was also an “enormous amount of uncertainty” about how the pandemic might permanently change people’s working and living patterns, and the effect that will have on the shape of the economy.

Even though inflation is expected to rise above the central bank’s 2 percent target, policymakers voted unanimously to keep the benchmark interest rate at 0.1 percent. It cut rates to that level in March 2020 at the start of the coronavirus pandemic.

The minutes of the central bank’s policy meeting showed that officials don’t intent to tighten monetary policy until “there is clear evidence that significant progress” is made on the economic recovery and inflation is sustainably at the bank’s target.

The Bank of England now forecasts unemployment to peak at 5.5 percent later this year, because of the extension of the government’s furlough program. In February, the central bank predicted the unemployment rate would rise as high as 7.75 percent.

The easing of pandemic restrictions will also increase consumer spending. The central bank added that it now expected people to spend about 10 percent of the excess savings they built up in lockdown based on new survey evidence. The previous estimate was just 5 percent.

But these extra savings are “not evenly distributed,” Mr. Bailey said. And they are concentrated among people who are older and already wealthier.

The Seattle Seahawks are very much still in the running for Baker Mayfield. (Photo by Stacy ... [+] Revere/Getty Images) Getty Images The Seattle … END_OF_DOCUMENT_TOKEN_TO_BE_REPLACED

(CNN) — Kim Kyung-seop recalls going to cheap bars after class with his friends, where they binged on as much makgeolli as possible. "You know the … END_OF_DOCUMENT_TOKEN_TO_BE_REPLACED