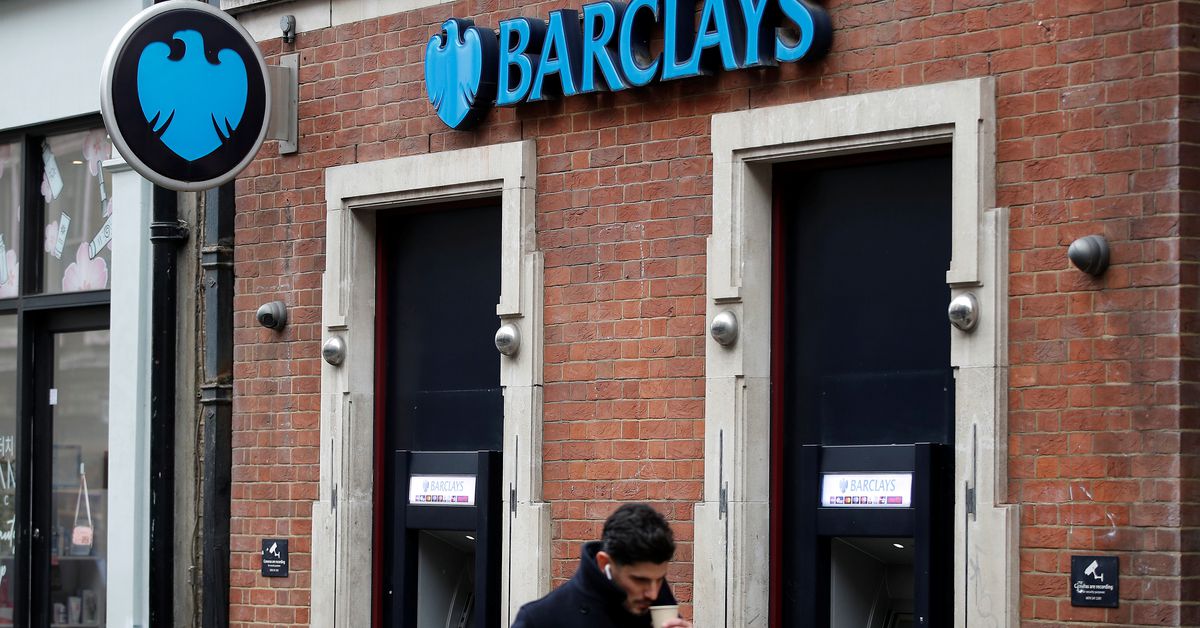 A branch of Barclays Bank is seen, in London, Britain, February 23, 2022. REUTERS/Peter Nicholls

LONDON/NEW YORK, March 28 (Reuters) – British bank Barclays faces an estimated 450 million pound ($592 million) loss and regulatory scrutiny for exceeding a U.S. limit on sales of structured products, some of which have surged in popularity since Russia’s invasion of Ukraine.

Barclays (BARC.L) also said on Monday that it will have to delay a planned 1 billion pound share buyback as of the loss, which it will have to incur as a result of buying back the securities in question at their original purchase price.

Shares in Barclays closed down 4% after the bank said it had oversold billions of pounds worth of the securities over a period of about a year, overshooting a $20.8 billion limit agreed with United States regulators by $15.2 billion.

The major regulatory blunder is an early embarrassment for C.S. Venkatakrishnan, the newly-appointed chief executive of Barclays, whose previous roles included heading up the bank’s global markets and risk operations.

Analysts at Shore Capital said in a note that Barclays appeared to be “tripping over its shoelaces”.

The wider investment bank had previously proved a stellar performer for Barclays over recent years, helping it to post a record annual profit for 2021. read more

While the current share buyback has only been delayed, the error could reduce future capital distributions to shareholders by the bank, the Shore Capital analysts said.

In a further blow after the London market close, a Goldman Sachs note seen by Reuters showed that the U.S. investment bank had been instructed by one of Barclays’ top investors to sell a significant chunk of stock in the bank.

The target price range for the sale of 575 million Barclays’ shares was 6.1-8.1% lower than the closing price, a factor which is likely to put further pressure on the stock price when it opens on Tuesday. read more

The products involved include two exchange-traded notes (ETNs) linked to crude oil and market volatility , a source familiar with the matter said. Barclays suspended sales and issuance of both this month. read more

Before sales were suspended, the so-called VXX product had surged in popularity as investors placed bets on volatility as the Ukraine crisis roiled global markets, with the number of shares changing hands daily doubling to 71 million in a month.

Barclays said at the time that capacity issues were to blame and the actions were not linked to the crisis in Ukraine.

The bank said on Monday its best estimate was that the loss on the affected securities would amount to 450 million pounds, cutting its core capital ratio to the middle of its 13-14% target range. The loss estimate did not include tax.

Barclays said it would delay its share buyback until the second quarter of the year as a result.

It said that it had commissioned an independent review, while regulators were conducting inquiries and requesting information from the bank.

Barclays said the securities were registered for sale in August 2019, adding that it would file a new registration with the U.S. Securities and Exchange Commission as soon as practicable.

MUSCATINE, Iowa--(BUSINESS WIRE)--HNI Corporation (NYSE: HNI) announced today its Board of Directors declared a quarterly dividend of 32 cents per … END_OF_DOCUMENT_TOKEN_TO_BE_REPLACED

If you’re superstitious, today is your day.That's because it's Friday the 13th (the only one of the year, in fact). It's a day when bad juju reigns … END_OF_DOCUMENT_TOKEN_TO_BE_REPLACED

CHARLOTTE, NORTH CAROLINA - OCTOBER 20: Chris Duarte #3 of the Indiana Pacers defends Gordon Hayward ... [+] #20 of the Charlotte Hornets during their … END_OF_DOCUMENT_TOKEN_TO_BE_REPLACED