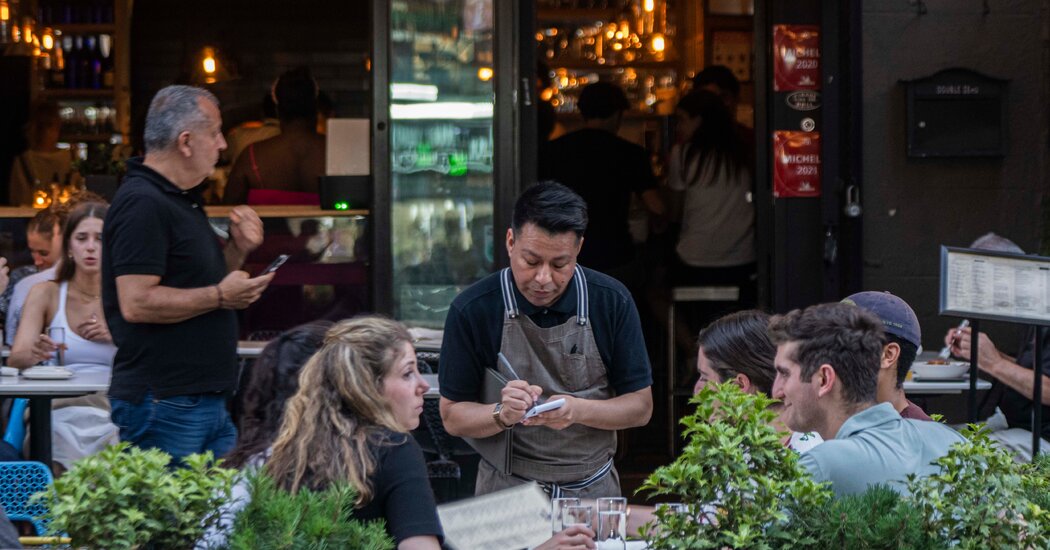 Sylvia Gaston, a waitress at a restaurant in Astoria, Queens, said her base wage is $7.50 an hour — even though New York City’s legal subminimum is $10, which must come to at least $15 after tips. Ms. Gaston, 40, who is from Mexico, feels that undocumented workers like her have a harder time fighting back when they are shortchanged.

“It doesn’t really matter if you have documents or not — I think folks are still getting underpaid in general,” she said. “However, when it comes to uplifting your voices and speaking about it, the folks who can get a little bit more harsh repercussions are people who are undocumented.”

Subminimum base pay for some tipped workers in the state, such as car washers, hairdressers and nail salon employees, was abolished in 2019 under an executive order by Gov. Andrew M. Cuomo, but workers in the food and drinks industry were left out.

Gov. Kathy Hochul, Mr. Cuomo’s successor, said while lieutenant governor in 2020 that she supported “a solid, full wage for restaurant workers.” And progressive legislators plan a bill in January that would eliminate the two-tier wage system by the end of 2025.

When The New York Times asked if she would support such changes, Ms. Hochul’s office did not answer directly. “We are always exploring the best ways to provide support” to service workers, it said.

Proponents of abandoning subminimum wages say there could be advantages for employers, including less turnover, better service and higher morale.

David Cooper, the director of the economic analysis and research network at the Economic Policy Institute, a progressive think tank, contends that when wage laws are changed to a single-tier system, business owners can have the assurance that “every single person they compete with is making the same exact adjustment,” reducing the specter of a competitive disadvantage.

AUSTIN, Texas--(BUSINESS WIRE)--As the first multifamily management company to be recognized in the Public Relations and Marketing Excellence Awards, … END_OF_DOCUMENT_TOKEN_TO_BE_REPLACED

There have been whispers of cooling housing and rental prices in the San Francisco Bay Area, but that hasn't yet translated into practical, noticeable … END_OF_DOCUMENT_TOKEN_TO_BE_REPLACED

Cars pass in Independence Square at twilight in Kyiv, Ukraine, Monday, Oct. 31, 2022. Rolling ... [+] blackouts are increasing across Ukraine as the … END_OF_DOCUMENT_TOKEN_TO_BE_REPLACED