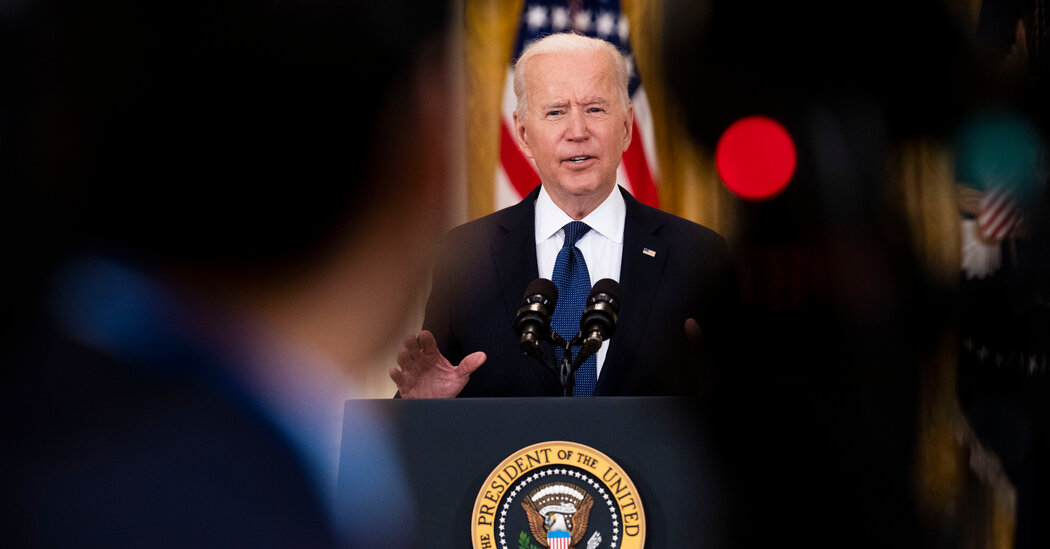 WASHINGTON — President Biden ordered the Labor Department on Monday to ensure that unemployed Americans cannot draw enhanced federal jobless benefits if they turn down a suitable job offer, even as he rejected claims by Republicans that his weekly unemployment bonus is undermining efforts to get millions of Americans back to work.

Stung from a weekend of criticism over a disappointing April jobs report, Mr. Biden struck a defiant tone, seeking to make clear that he expects workers to return to jobs if they are available, while defending his signature economic policy effort thus far and blaming corporate America, in part, for not doing more to entice people to go back to work.

The president told reporters at the White House that child care constraints, school closures and fears of contracting the coronavirus had hindered job creation last month, and he challenged companies to help workers gain access to vaccines and to raise their pay.

legal confrontation over whether states can cut taxes after taking relief money and using it to solidify their budgets.

Treasury and White House officials made clear that they would scrutinize how the funds were being used to ensure that state budgets were not being gamed to violate the intent of the law. A new recovery office at the Treasury Department will coordinate with states to help determine if their policies are in line with conditions set forth in the law.

A White House official would not comment on whether initiatives like Montana’s return-to-work bonuses could be funded using relief money. States and cities are being given broad discretion on how they can use the money, which is intended to replace public sector revenue that was lost during the pandemic; to provide extra pay for essential workers; and to be invested in sewer, water and broadband infrastructure.

“Arizona should not be put in a position of losing billions of dollars because the federal government wants to commandeer states’ tax policies,” Mr. Brnovich said.

The allocation of the funds is also likely to be a contentious matter as the money starts to flow. Some states have complained that states that managed the pandemic well are essentially being penalized because the formula for awarding aid is based on state unemployment rates.

The Treasury Department said on Monday that the states that were hardest hit economically by the pandemic would also get their money faster.

Local governments will generally receive half of the money this month and the rest next year. But states that currently have a net increase in unemployment of more than two percentage points since February 2020 will get the funds in a lump sum right away.

Officials also said Monday that the administration would issue new guidelines meant to speed money from the recovery act to help child care centers reopen, and that the Labor Department would highlight a program that allows some unemployed workers to accept offers of part-time jobs without losing access to the federally supplemented benefits.

Mr. Biden said that the efforts would help the economy recover — and that the rebound from recession remained on track.

“Let’s be clear: Our economic plan is working,” he said. But he said recovery would not always prove to be easy or even. “Some months will exceed expectations,” he said, “others will fall short.”

AUSTIN, Texas--(BUSINESS WIRE)--As the first multifamily management company to be recognized in the Public Relations and Marketing Excellence Awards, … END_OF_DOCUMENT_TOKEN_TO_BE_REPLACED

There have been whispers of cooling housing and rental prices in the San Francisco Bay Area, but that hasn't yet translated into practical, noticeable … END_OF_DOCUMENT_TOKEN_TO_BE_REPLACED

Cars pass in Independence Square at twilight in Kyiv, Ukraine, Monday, Oct. 31, 2022. Rolling ... [+] blackouts are increasing across Ukraine as the … END_OF_DOCUMENT_TOKEN_TO_BE_REPLACED