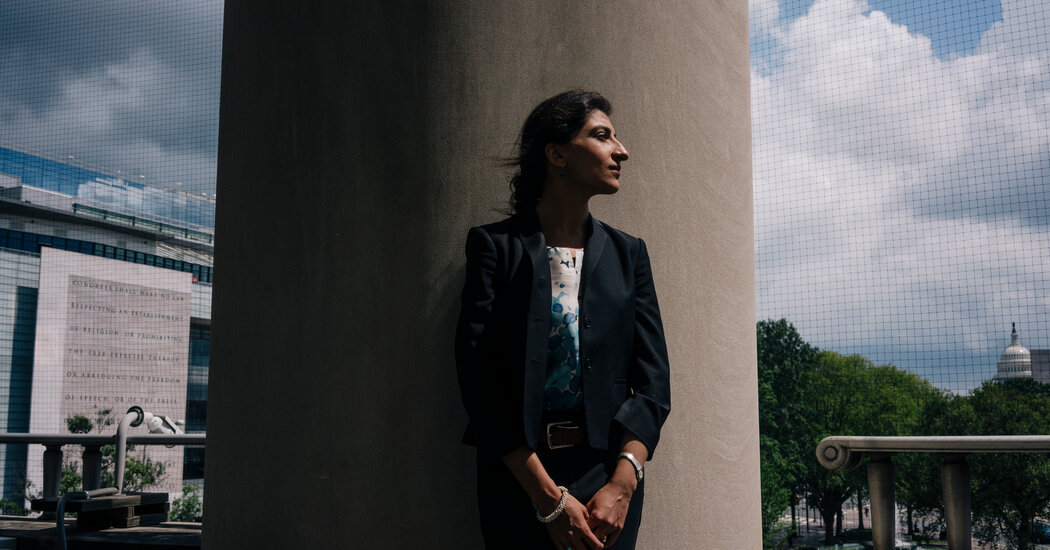 President Biden on Monday nominated Lina Khan to the Federal Trade Commission, installing a vocal critic of Big Tech into a key oversight role of the industry.

If her nomination is approved by the Senate, Ms. Khan, 32, would fill one of two empty seats earmarked for Democrats at the F.T.C.

Ms. Khan became recognized for her ideas on antitrust with a Yale Law Journal paper in 2017 called “Amazon’s Antitrust Paradox” that accused Amazon of abusing its monopoly power and put a critical focus on decades-old legal theories that relied heavily on price increases as the underlying measure of antitrust violations.

She served as a senior adviser to Rohit Chopra when he was F.T.C. commissioner. Most recently, she was a leading counsel member to a 16-month-long investigation of online platforms and competition by the House antitrust subcommittee. As a result, Democratic leaders on the subcommittee called for the breakup of Big Tech and legislation to strengthen enforcement of competition violations across the economy.

said in an interview with The New York Times in 2018. “But as citizens, as workers, and as entrepreneurs, we recognize that their power is troubling. We need a new framework, a new vocabulary for how to assess and address their dominance.”

Ms. Khan is the second prominent advocate of breaking up the large tech companies placed by the Biden administration in top antitrust roles. Also this month, Mr. Biden picked Tim Wu, a prominent critic of Google, Facebook and Amazon, as special assistant to the president on competition policy.

MIAMI--(BUSINESS WIRE)--Intelli Smart Homes, the leading smart home technology company, has been recognized as one of America’s fastest-growing … END_OF_DOCUMENT_TOKEN_TO_BE_REPLACED

Customers outside a Walmart store in Torrance, California, US, on Sunday, May 15, 2022. Walmart Inc. is scheduled to release earnings figures on May … END_OF_DOCUMENT_TOKEN_TO_BE_REPLACED

The past few years have been brutal on homebuyers' budgets. Would-be buyers have been priced out of some of the most desirable neighborhoods thanks to … END_OF_DOCUMENT_TOKEN_TO_BE_REPLACED