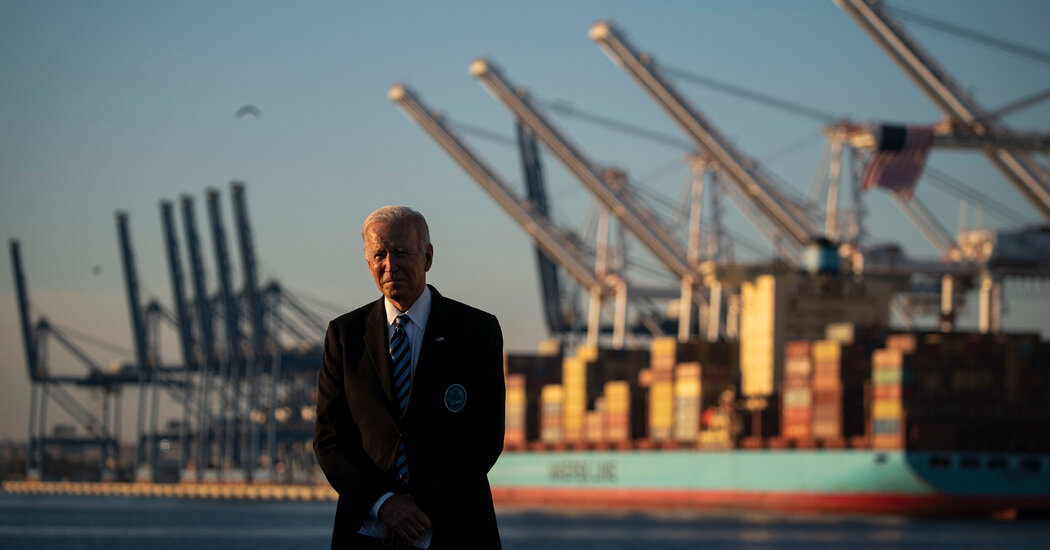 Rocketing inflation has become a headache for U.S. consumers, and President Biden has a go-to prescription. He says a key way to help relieve increasing prices is to pass a $1.85 trillion collection of spending programs and tax cuts that is currently languishing in the Senate.

A wide range of economists agree with the president — but only in part. They generally accept his argument that in the long run, the bill and his infrastructure plan could make businesses and their workers more productive, which would help to ease inflation as more goods and services are produced across the economy.

But many researchers, including a forecasting firm that Mr. Biden often cites to support the economic benefits of his proposals, say the bill is structured in a way that could add to inflation next year, before prices have had time to cool off.

Some economists and lawmakers worry about the timing, arguing that the risk of fueling more inflation when it has reached record highs outweighs the potential benefits of passing a big spending bill that could help to keep prices in check while addressing other social goals. Prices have picked up by 6.2 percent over the past year, the fastest pace in 31 years and far above the Federal Reserve’s inflation target.

Joe Manchin III of West Virginia, has questioned whether high and rising prices should persuade lawmakers to tone down their ambitions.

“West Virginians are concerned about rising inflation,” he said on Twitter last week. “We cannot throw caution to the wind & continue to pile on debt that our country can’t afford.”

Democrats preparing to push it to a House vote as early as next week. But timing is uncertain in the Senate, where a vote is likely to be changed or delayed in response to Mr. Manchin’s concerns.

The extent to which Mr. Biden’s $1.85 trillion bill exacerbates inflation largely depends on how much it stimulates the economy and whether Americans increase their spending as a result of the legislation — and when all of that occurs.

Many economists say it could create a short-term stimulus because the plan is structured to raise money gradually by taxing wealthier Americans, who are less likely to spend each additional dollar they have, and redistribute it quickly to people who earn less and are more likely to spend newfound cash.

Because of the difference in timing between when the government spends money and when it starts to bring in more revenue, the bill is expected to pump money into the economy in its early years. Moody’s Analytics — the firm that the White House typically cites when arguing in favor of its legislation — estimates that the government will spend $163 billion more on the package than it takes in next year. And the redistribution could make the money more potent as economic stimulus.

“The spending is designed to go to the people who are more likely to spend it than to save it,” said Ben Ritz, the director of the Progressive Policy Institute’s Center for Funding America’s Future. But more than any specific program, “the bigger inflationary issue is the math.”

White House economists have countered those arguments. If the bill passes, they say, it would do relatively little to spur increased consumer spending next year and not nearly enough to fully offset the loss of government stimulus to the economy as pandemic aid expires. That the program spends more heavily next year is a feature, they say, because it will partly blunt the economic drag as fiscal help fades. They note that the bill is intended to be offset completely by tax increases and other revenue savings.

And they argue that by increasing the economy’s capacity to churn out goods and services, the president’s infrastructure plan and his broader program could both help to moderate costs over time.

There is less economic or political debate about Mr. Biden’s $1 trillion infrastructure plan, which cleared Congress last week and which the president will sign on Monday. Economists — including conservative ones — largely agree that it is likely to eventually expand the capacity of the economy, and that it is small and spread out enough that it will not meaningfully fuel faster inflation in the near term.

Among Democrats, there is widespread support for the economic ambitions contained in the administration’s broader spending bill, which aims to create more equity for low- and middle-class earners and a bigger safety net for working parents. But the measure is drawing more complicated reviews when it comes to its immediate effect on inflation.

Economists at Moody’s found in a recent analysis that the administration’s full agenda would slightly increase inflation in 2022, though they did not expect the program to ultimately raise it because of benefits that would later ease supply constraints. It estimates that with the infrastructure bill alone, inflation will be running at a 2.1 percent annual rate by the final quarter of next year. If the larger spending bill also passes, that grows to 2.5 percent.

companies scramble for workers, prices rise and supply chains struggle to keep pace with booming demand, this is the wrong moment to hit the economy with any added juice.

Inflation looms more significantly in the near term because it is currently high, and if it remains that way for an extended period, consumers could change their behaviors and expectations, locking in faster gains. People who worry about the proposals say that 2022 is the wrong time to hand households more money.

Maya MacGuineas, the president of the Committee for a Responsible Federal Budget, said she was unsure whether the package would fuel inflation. But given the current pace of price increases, “you have to be more careful than you would be otherwise.”

The White House says the provisions of the bill that put money in families’ pockets, such as child care help, are not simple stimulus. They will allow caregivers into the labor market, they argue, an investment in the economy’s future that will allow it to produce more with time.

That makes the new program different from the spending passed earlier this year. The Biden administration increasingly acknowledges that sending households checks and offering expanded unemployment insurance supplemented savings, and that as households had more wherewithal to spend it helped to drive up prices.

Mr. Biden said in Baltimore on Wednesday. But the White House contends that this program is not the same as the previous package, and that it will make the price situation better, not worse.

“According to the economic experts, this bill is going to ease inflationary pressures,” the president said on Wednesday.

Still, the 17 Nobel Prize-winning economists that the White House regularly cites have specified that capacity improvements will ease inflation over time rather than imminently.

“Because this agenda invests in long-term economic capacity and will enhance the ability of more Americans to participate productively in the economy,” they wrote, “it will ease longer-term inflationary pressures.”

AUSTIN, Texas--(BUSINESS WIRE)--As the first multifamily management company to be recognized in the Public Relations and Marketing Excellence Awards, … END_OF_DOCUMENT_TOKEN_TO_BE_REPLACED

There have been whispers of cooling housing and rental prices in the San Francisco Bay Area, but that hasn't yet translated into practical, noticeable … END_OF_DOCUMENT_TOKEN_TO_BE_REPLACED

Cars pass in Independence Square at twilight in Kyiv, Ukraine, Monday, Oct. 31, 2022. Rolling ... [+] blackouts are increasing across Ukraine as the … END_OF_DOCUMENT_TOKEN_TO_BE_REPLACED