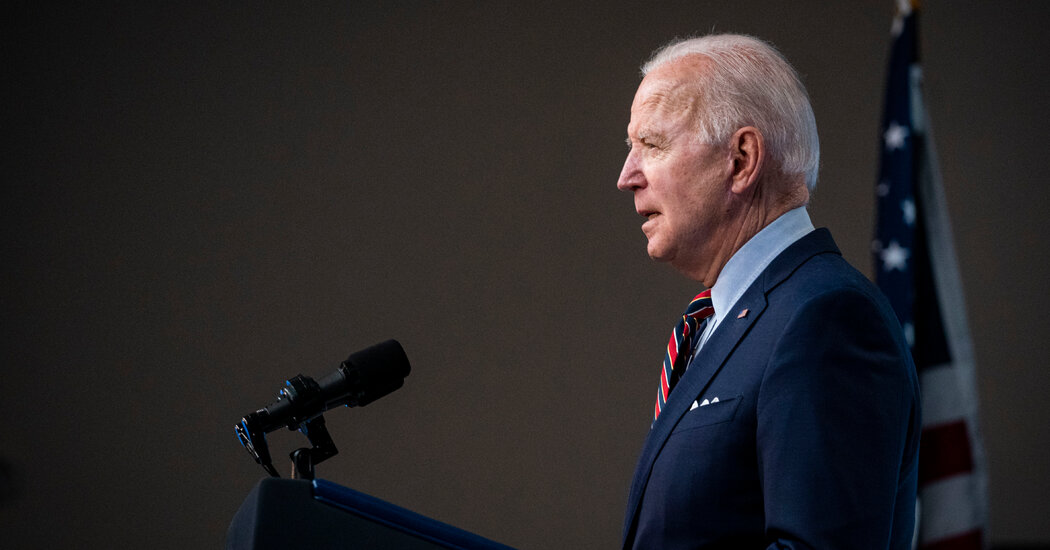 WASHINGTON — President Biden, in an effort to pay for his ambitious economic agenda, is expected to propose giving the Internal Revenue Service an extra $80 billion and more authority over the next 10 years to help crack down on tax evasion by high-earners and large corporations, according to two people familiar with the plan.

The additional money and enforcement power will accompany new disclosure requirements for people who own businesses that are not organized as corporations and for other wealthy people who could be hiding income from the government.

The Biden administration will portray those efforts — coupled with new taxes it is proposing on corporations and the rich — as a way to level the tax playing field between typical American workers and very high-earners who employ sophisticated efforts to minimize or avoid taxation.

Mr. Biden plans to use money raised by the effort to help pay for the cost of his “American Families Plan,” which he will detail before addressing a joint session of Congress on Wednesday.

$2.3 trillion infrastructure package, is expected to cost at least $1.5 trillion and will include universal prekindergarten, a federal paid leave program, efforts to make child care more affordable, free community college for all and tax credits meant to fight poverty.

The administration also aims to pay for the plan by raising the top marginal income tax rate for wealthy Americans to 39.6 percent from 37 percent and raising capital gains tax rates for those who earn more than $1 million a year. Mr. Biden will also seek to raise the tax rate on income that people earning more than $1 million per year receive through stock dividends, according to a person familiar with the proposal.

Administration officials have privately concluded that an aggressive crackdown on tax avoidance by corporations and the rich could raise at least $700 billion on net over 10 years. The $80 billion in proposed funding would be an increase of two-thirds over the agency’s entire funding levels for the past decade.

The administration is expected to portray the $780 billion it expects to collect through enhanced enforcement as conservative. That figure includes only money directly raised by enhanced tax audits and additional reporting requirements, and not any additional revenue from people or companies choosing to pay more taxes after previously avoiding them.

Previous administrations have long talked about trying to close the so-called tax gap — the amount of money that taxpayers owe but that is not collected each year. This month, the head of the I.R.S., Charles Rettig, told a Senate committee that the agency lacked the resources to catch tax cheats, costing the government as much as $1 trillion a year. The agency’s funding has failed to keep pace with inflation in recent years, amid budget tightening efforts, and its audits of rich taxpayers have declined.

whose research with the Harvard University economist Lawrence H. Summers suggests that the United States could raise as much as $1.1 trillion over a decade via increased tax enforcement.

Mr. Biden’s efforts would incorporate some of Ms. Sarin and Mr. Summers’s suggestions, including investing heavily in information technology improvements to help the agency better target its audits of high-earners and companies.

They would also provide a dedicated funding stream to the agency, to enable officials to steadily ramp up their enforcement practices without fear of budget cuts, and to signal to potential tax evaders that the agency’s efforts will not be soon diminished. Mr. Biden would also add new requirements for people who own so-called pass-through corporations or hold their wealth in opaque structures, reminiscent of a program established under President Barack Obama that helps the agency better track possible tax evasion by Americans with overseas holdings.

“Information reporting, coupled with restoring enforcement efforts, is key to improve in compliance,” Mr. Goldberg said in an email. “Audits alone will never do the trick.”

He added: “None of this happens overnight. A decade of stable funding is necessary to recruit and train talent and build on the necessary technology — not only for compliance purposes but to meet the quality of services that the vast majority complaint taxpayers expect and deserve.”

Three men were indicted in the death of the notorious gangster James (Whitey) Bulger, who was beaten to death four years ago in a West Virginia … END_OF_DOCUMENT_TOKEN_TO_BE_REPLACED

Dr. Connolly and Dr. Mott live in the North Baltimore neighborhood of Homeland, known for its strong public schools and colonial architecture, which … END_OF_DOCUMENT_TOKEN_TO_BE_REPLACED