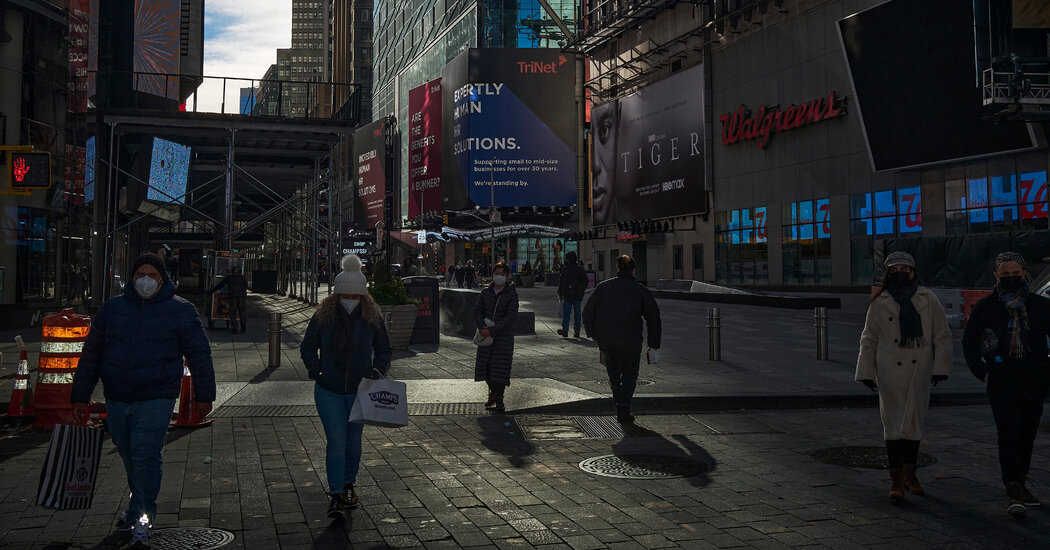 The coronavirus pandemic has threatened to rapidly expand yawning gaps between the rich and the poor, throwing lower-earning service workers out of jobs, costing them income, and limiting their ability to build wealth. But by betting on big government spending to pull the economy back from the brink, United States policymakers could limit that fallout.

The $1.9 trillion economic aid package President Biden signed into law last month includes a wide range of programs with the potential to help poor and middle-class Americans to supplement lost income and save money going forward. That includes monthly payments to parents, relief for renters and help with student loans.

Now, the administration is rolling out additional plans that would go even further, including a $2.3 trillion infrastructure package and about $1.5 trillion in spending and tax credits to support the labor force by investing in child care, paid leave, universal prekindergarten and free community college. The measures are explicitly meant to help left-behind workers and communities of color who have faced systemic racism and entrenched disadvantages — and they would be funded, in part, by taxes on the rich.

Forecasters predict that the government spending — even just what has been passed so far — will fuel what could be the fastest annual economic growth in a generation this year and next, as the country recovers and the economy reopens from the Covid-19 pandemic. By jump-starting the economy from the bottom and middle, the response could make sure the pandemic rebound is more equitable than it would be without a proactive government response, analysts said.

disproportionately hurt women of all races and men of color, she said, “If we tailor the relief to those who are most affected, we are going to be addressing racial and ethnic gaps.”

From its first days, the pandemic set the stage for a K-shaped economy, one in which the rich worked from home without much income disruption as poorer people struggled. Workers in low-paying service jobs were far more likely to lose jobs, and among racial groups, Black people have experienced a much slower labor market rebound than their white counterparts. Globally, the downturn probably put 50 million people who otherwise would have qualified as middle class into lower income levels, based on one recent Pew Research analysis.

But data suggest the U.S. policy response — including relief legislation that passed under the Trump administration last year — has helped to mitigate the pain.

“The CARES Act to the American Rescue plan have helped to support more households than I would have imagined,” Charles Evans, the president of the Federal Reserve Bank of Chicago, told reporters during a call earlier this month, referring to the early 2020 and early 2021 pandemic relief packages.

across the board after slumping early last year, foreclosures have remained low, and household consumption has been shored up by repeated stimulus checks.

While the era has been fraught with uncertainty and people have slipped through the cracks, this downturn looks very different for poorer Americans than the post-financial crisis period. That recession ended in 2009, and America’s wealthiest households recovered precrisis wealth levels by 2012, while it took until 2017 for the poorest to do the same.

income inequality — the gap between how much the poor and the rich earn each year — might soon decline. Lower income inequality could, in theory, lead to lower wealth inequality over time, as households have the wherewithal save more evenly.

Researchers debate whether monetary policy actually worsens wealth divides in the long run — especially since there’s the hairy question of what would have happened had the Fed not acted — but monetary policymakers generally agree that their policies can’t stop a pre-existing trend toward ever-worse wealth inequality.

By offering a more targeted boost from the very start of the recovery, fiscal policy can. Or, at a minimum, it can prevent wealth gaps from deepening so much.

Monetary policy “is naturally trickle-down,” said Joseph Stiglitz, an economist at Columbia and Nobel laureate. “Fiscal policy can work from the bottom and middle up.”

That’s what the Biden administration is gambling on. Paired with packages from December and last April, Congress’s recent package will bring the amount of economic relied that Congress has approved during the pandemic to more than $5 trillion. That dwarfs the amount spent in the last recovery.

The legislation is a mosaic of tax credits, stimulus checks and small business support that could leave families at the lower end of the income and savings distribution with more money in the bank and, if its provisions work as advertised, with a better chance of getting back to work early in the recovery.

There is no guarantee Mr. Biden’s broader economic proposals, totaling about $4 trillion, will clear a narrowly divided Congress. Republicans have balked at his plans and this week offered a counterproposal on infrastructure that is only a fraction the size of what Mr. Biden wants to spend. A bipartisan group of House moderates is pushing the president to finance infrastructure spending through an increased gas tax or something similar, which hits the poor harder than the rich.

Still, the president’s new proposals could have long-term impacts, working to retool workers’ skills and lift communities of color in hopes of putting the economy on more equal footing. The president is set to outline his so-called American Family Plan, which is focused on the work force, before his first address to a joint session of Congress next week.

While details have yet to be finalized, programs like universal prekindergarten, expanded subsidies for child care and a national paid leave program would be paid for partly by raising taxes on investors and rich Americans. That could also affect the wealth distribution, shuffling savings from the rich to the poor.

The plan, which must win support in a Congress where Democrats have just a narrow margin, would raise the top marginal income tax rate to 39.6 percent from 37 percent, and raise taxes on capital gains — the proceeds of selling an asset, like a stock — for people making more than $1 million to 39.6 percent from 20 percent. Counting in an Obamacare-related tax, the taxes they pay on profits would rise above 43 percent.

The new policies won’t necessarily cut wealth inequality, which has been on an inexorable upward march for decades, but they could keep poorer households from falling behind by as much as they would have otherwise.

Betting big on fiscal policy to return the economy to strength is a gamble. If the economy overheats, as some prominent economists have warned it could, the Fed might have to rapidly lift interest rates to cool things down. Rapid adjustments have historically caused recessions, which consistently throw vulnerable groups out of jobs first.

But administration officials have repeatedly said the bigger risk is underdoing it, leaving millions on the labor market’s sidelines to struggle through another tepid recovery. And they say the spending provisions in both the rescue package and the infrastructure could help to fix longstanding divides along racial and gender lines.

“We think of investment in racial equity, and equity in general, as good policy, period, and integral to all the work we do,” Catherine Lhamon, a deputy director of the Domestic Policy Council, said in an interview.

MIAMI--(BUSINESS WIRE)--Intelli Smart Homes, the leading smart home technology company, has been recognized as one of America’s fastest-growing … END_OF_DOCUMENT_TOKEN_TO_BE_REPLACED

Customers outside a Walmart store in Torrance, California, US, on Sunday, May 15, 2022. Walmart Inc. is scheduled to release earnings figures on May … END_OF_DOCUMENT_TOKEN_TO_BE_REPLACED

The past few years have been brutal on homebuyers' budgets. Would-be buyers have been priced out of some of the most desirable neighborhoods thanks to … END_OF_DOCUMENT_TOKEN_TO_BE_REPLACED