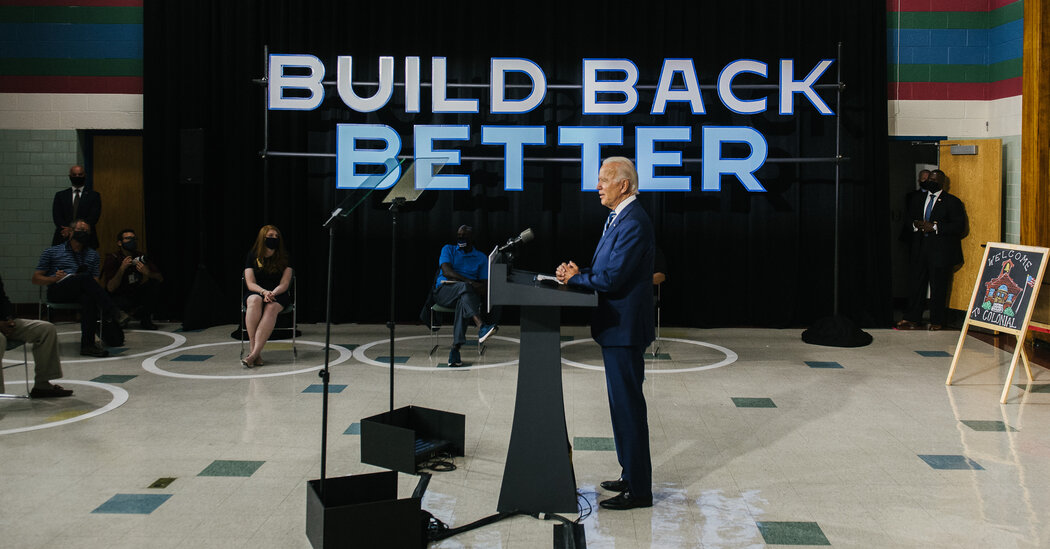 WASHINGTON — After a two-month, $2 trillion sprint to pass aid for an economy still hobbled by the coronavirus pandemic, President Biden is finally set to detail his “Build Back Better” agenda next week in Pittsburgh. Its name, carried over from the 2020 campaign, has become a catchall phrase that cabinet officials and junior aides use to describe all manner of plans to overhaul American capitalism.

In the weeks ahead, the president’s strategic choices will show the country what “building” really means, to him.

Mr. Biden’s forthcoming proposals, which aides and documents suggest could cost as much as $4 trillion over the next decade, are a pivot to the core economic agenda he campaigned on: rebuilding infrastructure, revitalizing America’s competitiveness in emerging industries and reducing the barriers that hold back men of color and women in the workplace.

Mr. Biden will have the benefit of momentum in pushing them, and of a political moment that seems ripe for another large spending bill. Democrats are riding high on the public approval ratings for their coronavirus relief bill across the country. Even the most conservative Democrats in the Senate are eager to spend big again to address infrastructure concerns that have festered for a decade, and to combat widened income inequality that has helped fuel the rise of populist politicians in both parties.

toured the Mississippi River to celebrate projects built with money from an $800 billion economic stimulus bill that had passed seven years before. He stopped at a port, a bus and train terminal, and a rail yard where he declared, “I’m a railroad guy.”

In his campaign, he spoke frequently of the need to build more in the United States to improve the economy and better compete with international rivals like China in a host of emerging industries like fifth-generation cellular networks, known as 5G, and advanced battery manufacturing. Like President Donald J. Trump before him, he has set ambitious goals to reverse a decades-long slide in American factory employment, pledging to create at least five million new jobs in manufacturing and innovation. Aides say he is particularly fond of repeating his pledge to install 500,000 electric-car charging stations across the country.

The “Build Back Better” plan that his economic advisers recommended Mr. Biden pursue this week would lead with those physical investments: a combination of spending and tax incentives on traditional infrastructure, high-growth industry cultivation and carbon-reducing energy investment that documents suggest could top $2 trillion.

But Mr. Biden’s economic advisers emphasize that the economy needs more than construction to increase productivity and achieve the president’s goals. They argue that it also needs investments in education, like universal prekindergarten and free community college, and in efforts to relieve the burdens of caring for family that often hamper working women. Those initiatives are included in the second half of the proposal that aides took to Mr. Biden this week, along with extensions of newly expanded tax credits meant to fight poverty.

“This next package is really about investing in our future and making the kind of smart investments that we know will increase growth,” Ms. Rouse said at a White House news briefing. “And we want that growth to be widely shared.”

“These aren’t simply women’s issues,” she said. “They affect all families, the ability of our economy to recover and our nation’s competitiveness.”

Inside the administration, aides disagree on the likelihood that both halves of the plan — the physical piece and the human piece — could pass Congress this year. Some see hope that Republicans, spurred by the business community, could join an effort with Democrats to muster 60 votes to pass a bill that spends heavily on roads, bridges, water systems and other traditional infrastructure. Some Democrats, like Senator Joe Manchin III of West Virginia, a key swing vote, have insisted that Republicans be involved in the effort.

But most Democrats in and outside the White House see little chance, if any, of a large bipartisan bill taking shape. They point to early opposition from Senator Mitch McConnell of Kentucky, the Republican leader, who has called the proposals a likely “Trojan horse” for tax increases, and whose aides have begun labeling them a “Green New Deal” in disguise, even before Mr. Biden releases the details.

Lobbyists following the process closely expect Mr. Biden to allow Senate moderates to effectively test the proposition, giving them a fixed time to line up 10 Republicans behind an ambitious infrastructure bill that would almost certainly need to be financed by something other than the tax increases on the wealthy and corporations that the administration favors.

At the same time, Democratic leaders will most likely prepare to move at least one part of Mr. Biden’s plans quickly through the budget reconciliation process, which allows senators to skirt the filibuster and pass legislation with a bare majority, as they did for the coronavirus relief bill. Senator Ron Wyden of Oregon, the chairman of the Finance Committee, said in an interview that he is drawing up legislative text for tax increases to fund the Biden spending: “I’m going to start rolling out specific proposals so that people can have ideas about how they might proceed,” he said.

Moving on a party-line basis could leave all or most of the “human” programs behind, some in the administration fear. But analysts in Washington suggest many of them could eventually be rolled into an epic, single bill, perhaps costing $3 trillion and offset in part by tax increases on corporations and the rich, which would pass with only Democratic votes.

The idea, said Jon Lieber, a former aide to Mr. McConnell who is now managing director, United States, for the Eurasia Group in Washington, is that by moving fast and aggressively, Mr. Biden might be able to strong-arm even reluctant Democrats, who see their political fates tied to the continuing success of the administration in the polls.

GREENVILLE, N.C.--(BUSINESS WIRE)--Employers aiming to win the war on talent have a new “A” team to tap into: college and professional athletes. … END_OF_DOCUMENT_TOKEN_TO_BE_REPLACED

Mortgage rates are likely to rise in July, extending a seven-month streak. High inflation, and the Federal Reserve's efforts to control it, have … END_OF_DOCUMENT_TOKEN_TO_BE_REPLACED