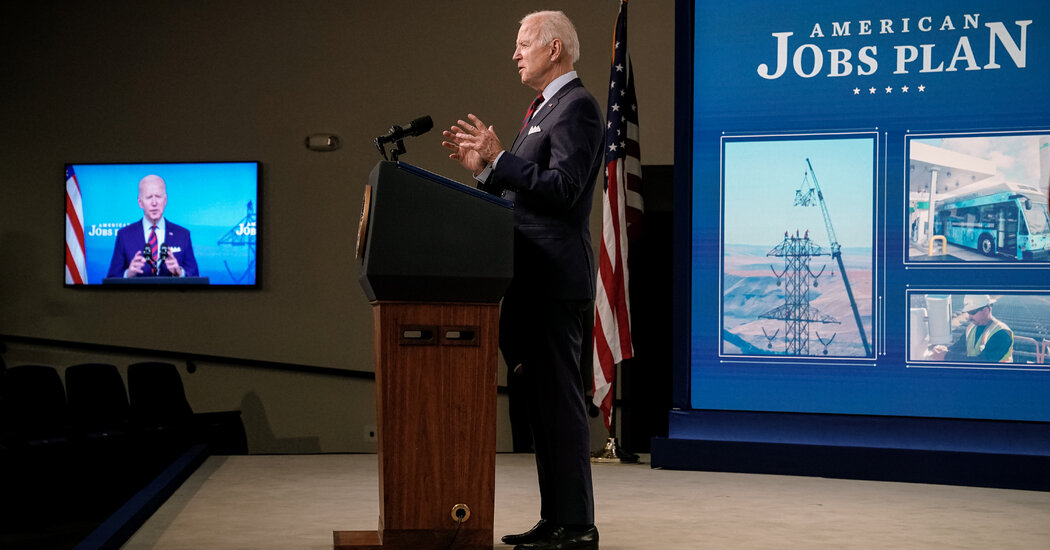 WASHINGTON — Large companies like Apple and Bristol Myers Squibb have long employed complicated maneuvers to reduce or eliminate their tax bills by shifting income on paper between countries. The strategy has enriched accountants and shareholders, while driving down corporate tax receipts for the federal government.

President Biden sees ending that practice as central to his $2 trillion infrastructure package, pushing changes to the tax code that his administration says will ensure American companies are contributing tax dollars to help invest in the country’s roads, bridges, water pipes and other parts of his economic agenda.

On Wednesday, the Treasury Department released the details of Mr. Biden’s tax plan, which aims to raise as much as $2.5 trillion over 15 years to help finance the infrastructure proposal. That includes bumping the corporate tax rate to 28 percent from 21 percent, imposing a strict new minimum tax on global profits and levying harsh penalties on companies that try to move profits offshore.

The plan also aims to stop big companies that are profitable but have no federal income tax liability from paying no taxes to the Treasury Department by imposing a 15 percent tax on the profits they report to investors. Such a change would affect about 45 corporations, according to the Biden administration’s estimates, because it would be limited to companies earning $2 billion or more per year.

President Donald J. Trump’s 2017 tax cuts. Biden administration officials say that law increased the incentives for companies to shift profits to lower-tax countries, while reducing corporate tax receipts in the United States to match their lowest levels as a share of the economy since World War II.

Treasury Secretary Janet L. Yellen, in rolling out the plan, said it would end a global “race to the bottom” of corporate taxation that has been destructive for the American economy and its workers.

“Our tax revenues are already at their lowest level in generations,” Ms. Yellen said. “If they continue to drop lower, we will have less money to invest in roads, bridges, broadband and R&D.”

The plan, while ambitious, will not be easy to enact.

Some of the proposals, like certain changes to how a global minimum tax is applied to corporate income, could possibly be put in place by the Treasury Department via regulation. But most will need the approval of Congress, including increasing the corporate tax rate. Given Democrats’ narrow majority in both the Senate and the House, that proposed rate could drop. Already, Senator Joe Manchin III of West Virginia, a crucial swing vote, has said he would prefer a 25 percent corporate rate.

Companies also shift jobs and investments between countries, but often for different reasons. In many cases, they are following lower labor costs or seeking customers in new markets to expand their businesses. The Biden plan would create new tax incentives for companies to invest in production and research in the United States.

Conservative tax experts, including several involved in writing the 2017 law, say they have seen no evidence of the law enticing companies to move jobs overseas. Mr. Biden has assembled a team of tax officials who contend the provisions have given companies new incentives to move investment and profits offshore.

Mr. Biden’s plan would raise the rate of Mr. Trump’s minimum tax and apply it more broadly to income that American companies earn overseas. Those efforts would try to make it less appealing for companies to book profits in lower-tax companies.

The S.H.I.E.L.D. proposal is an attempt to discourage American companies from moving their headquarters abroad for tax purposes, particularly through the practice known as “inversions,” where companies from different countries merge, creating a new foreign-located firm.

Under current law, companies with headquarters in Ireland can “strip” some of their profits earned by subsidiaries in the United States and send them back to the Ireland company as payments for things like the use of intellectual property, then deduct those payments from their American income taxes. The S.H.I.E.L.D. plan would disallow those deductions for companies based in low-tax countries.

Tax professionals say Mr. Biden’s proposed changes to that law could be difficult to administer. Business groups say they could hamper American companies as they compete on a global scale.

Republicans denounced the plan as bad for the United States economy, with lawmakers on the House Ways and Means Committee saying that “their massive tax hikes will be shouldered by American workers and small businesses.”

coupled with an effort through the Organization for Economic Cooperation and Development to broker a global agreement on minimum corporate taxation, will start a worldwide revolution in how and where companies are taxed. That is in part because the Biden plans include measures meant to force other countries to go along with a new global minimum tax that Ms. Yellen announced support for on Monday.

Treasury Department officials estimate in their report that the proposed changes to the minimum tax, and the implementation of the S.H.I.E.L.D. plan, would raise an estimated $700 billion over 10 years on their own.

Business groups warn the administration’s efforts will hamstring American companies, and they have urged Mr. Biden to wait for the international negotiations to play out before following through with any changes.

Members of the Business Roundtable, which represents corporate chief executives in Washington, said this week that Mr. Biden’s minimum tax “threatens to subject the U.S. to a major competitive disadvantage.” They urged the administration to first secure a global agreement, adding that “any U.S. minimum tax should be aligned with that agreed upon global level.”

However, some companies expressed an openness on Wednesday to some of the changes.

“I think it’s important to make investments again in the country and the economy,” Mr. Zimmer said. “And as the economy grows, so too does jobs and so too does people’s needs to get around.”

AUSTIN, Texas--(BUSINESS WIRE)--As the first multifamily management company to be recognized in the Public Relations and Marketing Excellence Awards, … END_OF_DOCUMENT_TOKEN_TO_BE_REPLACED

There have been whispers of cooling housing and rental prices in the San Francisco Bay Area, but that hasn't yet translated into practical, noticeable … END_OF_DOCUMENT_TOKEN_TO_BE_REPLACED

Cars pass in Independence Square at twilight in Kyiv, Ukraine, Monday, Oct. 31, 2022. Rolling ... [+] blackouts are increasing across Ukraine as the … END_OF_DOCUMENT_TOKEN_TO_BE_REPLACED