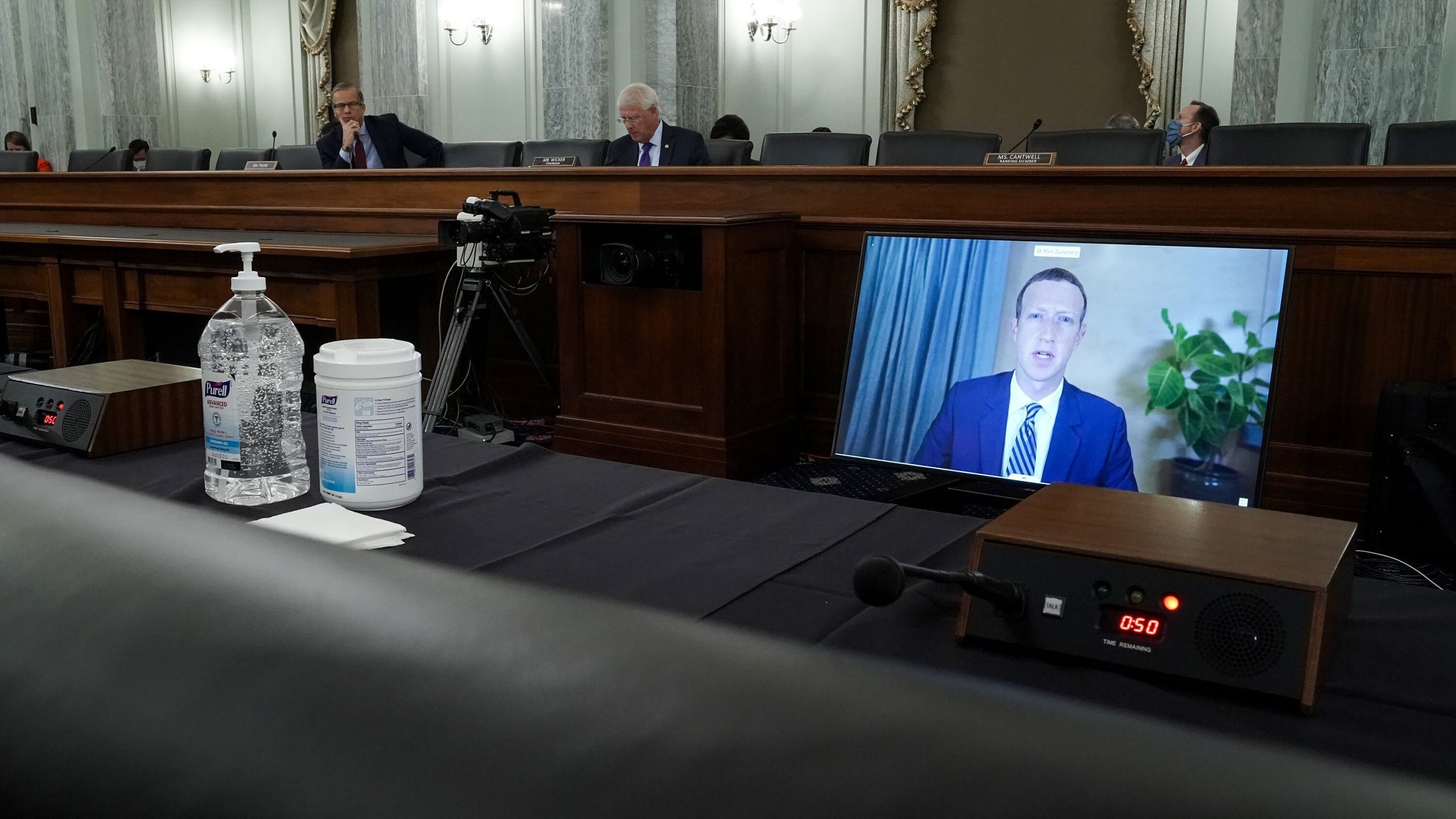 Mark Zuckerberg of Facebook, Jack Dorsey of Twitter and Sundar Pichai of Google are appearing at a hearing held by the House Energy and Commerce Committee about how disinformation spreads across their platforms.

Democratic lawmakers accused the chief executives of allowing disinformation to run rampant online, reflecting their mounting frustration about the spread of extremism, conspiracy theories and falsehoods online in the aftermath of the Jan. 6 riot at the Capitol.

Their comments opened the first hearing since President Biden’s inauguration featuring Mark Zuckerberg of Facebook, Sundar Pichai of Google and Jack Dorsey of Twitter. They were a signal that scrutiny of Silicon Valley’s business practices will not let up, and may even intensify, with Democrats in the White House and leading both chambers of Congress.

The January riot made the issue of disinformation intensely personal for many lawmakers. Some participants have been linked to online conspiracies like QAnon, which the platforms have tried to stem in recent months.

“We fled as a mob desecrated the Capitol, the House floor and our democratic process,” said Representative Mike Doyle, a Pennsylvania Democrat. “That attack and the movement that motivated it started and was nourished on your platforms.”

Lawmakers argued that the platforms also had enabled misinformation about the coronavirus pandemic.

The lawmakers’ growing frustration comes as they consider whether to more tightly regulate the business models of the platforms. Some have proposed modifying a legal shield that protects websites from lawsuits over content posted by their users, arguing that it allows the companies to get away negligence in policing their products.

Representative Jan Schakowsky, Democrat of Illinois, said Thursday that the executives should take away that “self-regulation has come to the end of its road.”

Republican lawmakers came into the hearing steaming about the Jan. 6 Capitol riots, but their animus was focused on the decisions by the platforms to ban right-wing figures, including former President Donald J. Trump, for inciting violence.

The decisions to ban Mr. Trump, many of his associates and other conservatives, they said, amounted to liberal bias and censorship.

“We’re all aware of Big Tech’s ever-increasing censorship of conservative voices and their commitment to serve the radical progressive agenda,” said Bob Latta, the ranking Republican of the House’s communications and technology subcommittee.

After the Capitol riots, Mr. Trump and some of his top aides were temporarily or indefinitely banned on major social media sites.

Mr. Latta’s comments are expected to be echoed by many Republicans in the hearing. They say the platforms have become gatekeepers of information, and they accuse the companies of trying to suppress conservative views. The claims have been consistently refuted by academics.

Mr. Latta homed in on the legal shield known as Section 230 of the Communications Decency Act and whether the big tech companies deserve the regulatory protection.

“Section 230 provides you with the liability protection for content moderation decisions made in good faith,” Mr. Latta said. But he said the companies have appeared to use their moderating powers to censor viewpoints that the companies disagree with. “I find that highly concerning.”

The chief executives of Facebook, Alphabet and Twitter are expected to face tough questions from lawmakers on both sides of the aisle. Democrats have focused on disinformation, especially in the wake of the Capitol riot. Republicans, meanwhile, have already questioned the companies about their decisions to remove conservative personalities and stories from their platforms.

New York Times reporters have covered many of the examples that could come up. Here are the facts to know about them:

After his son was stabbed to death in Israel by a member of the militant group Hamas in 2016, Stuart Force decided that Facebook was partly to blame for the death, because the algorithms that power the social network helped spread Hamas’s content. He joined relatives of other terror victims in suing the company, arguing that its algorithms aided the crimes by regularly amplifying posts that encouraged terrorist attacks. Arguments about the algorithms’ power have reverberated in Washington.

What is Section 230? Legal Shield for Websites is Targeted by Lawmakers

Section 230 of the Communications Decency Act, has helped Facebook, YouTube, Twitter and countless other internet companies flourish. But Section 230’s liability protection also extends to fringe sites known for hosting hate speech, anti-Semitic content and racist tropes. As scrutiny of big technology companies has intensified in Washington over a wide variety of issues, including how they handle the spread of disinformation or police hate speech, Section 230 has faced new focus.

After inflaming political discourse around the globe, Facebook is trying to turn down the temperature. The social network started changing its algorithm to reduce the political content in users’ news feeds. Facebook previewed the change earlier this year when Mark Zuckerberg, the chief executive, said the company was experimenting with ways to tamp down divisive political debates among users. “One of the top pieces of feedback we’re hearing from our community right now is that people don’t want politics and fighting to take over their experience on our services,” he said.

As the Electoral College affirmed Joseph R. Biden Jr.’s election, voter fraud misinformation subsided. But peddlers of online falsehoods ramped up lies about the Covid-19 vaccines. Rep. Marjorie Taylor Greene, a Republican of Georgia, as well as far-right websites like ZeroHedge, have begun pushing false vaccine narratives, researchers said. Their efforts have been amplified by a robust network of anti-vaccination activists like Robert F. Kennedy Jr. on platforms including Facebook, YouTube and Twitter.

In the end, two billionaires from California did what legions of politicians, prosecutors and power brokers had tried and failed to do for years: They pulled the plug on President Trump. Journalists and historians will spend years unpacking the improvisational nature of the bans, and scrutinizing why they arrived just as Mr. Trump was losing his power, and Democrats were poised to take control of Congress and the White House. The bans have also turned up the heat on a free-speech debate that has been simmering for years.

In the fall of 2017, when Congress called on Google, Facebook and Twitter to testify about their role in Russia’s interference with the 2016 presidential election, the companies didn’t send their chief executives — as lawmakers had requested — and instead summoned their lawyers to face the fire.

During the hearings, the politicians complained that the general counsels were answering questions about whether the companies contributed to undermining the democratic process instead of “the top people who are actually making the decisions,” as Senator Angus King, an independent from Maine, put it.

It was clear Capitol Hill wanted its pound of C.E.O. flesh and that hiding behind the lawyers was not going to work for long. That initial concern about how the chieftains of Silicon Valley would handle grilling from lawmakers is no longer a worry. After a slew of hearings in recent years, both virtual and in-person, the executives have had plenty of practice.

And when the three men again face questioning on Thursday, they will do so now as seasoned veterans in the art of deflecting the most vicious attacks and then redirecting to their carefully practiced talking points.

In general, Mr. Pichai tends to disagree politely and quickly at the sharpest jabs from lawmakers — such as when Mr. Pichai was asked last year why Google steals content from honest businesses — but not harp on it. When a politician tries to pin him down on a specific issue, he often relies on a familiar delay tactic: My staff will get back to you.

Mr. Pichai is not a dynamic cult-of-personality tech leader like Steve Jobs or Elon Musk, but his reserved demeanor and earnestness is well suited for the congressional spotlight.

Mr. Zuckerberg has also grown more comfortable with the hearings over time and more emphatic about what the company is doing to combat misinformation. At his first appearance in 2018, Mr. Zuckerberg was contrite and made promises to do better for failing to protect users’ data and prevent Russian interference in elections.

Since then, he has pushed the message that Facebook is a platform for good, while carefully laying out the steps that the company is taking to stamp out disinformation online.

As the sessions have gone virtual during the pandemic, Mr. Dorsey’s appearances, hunched over a laptop camera, carry a just-another-guy-on-Zoom vibe when compared to the softly lit neutral backdrops for the Google and Facebook chiefs.

who died last week at age 99, will be laid to rest on Saturday after a funeral service at St. George’s Chapel in Windsor Castle. His send-off will be … END_OF_DOCUMENT_TOKEN_TO_BE_REPLACED

Prince Philip, the Duke of Edinburgh and husband of Queen Elizabeth II who died last week at age 99, will be laid to rest on Saturday after a funeral … END_OF_DOCUMENT_TOKEN_TO_BE_REPLACED

April 17, 2021Every day, when Ko Win Kyaw goes out to demonstrate against the Myanmar military, he carries his slingshot and a supply of rocks as … END_OF_DOCUMENT_TOKEN_TO_BE_REPLACED