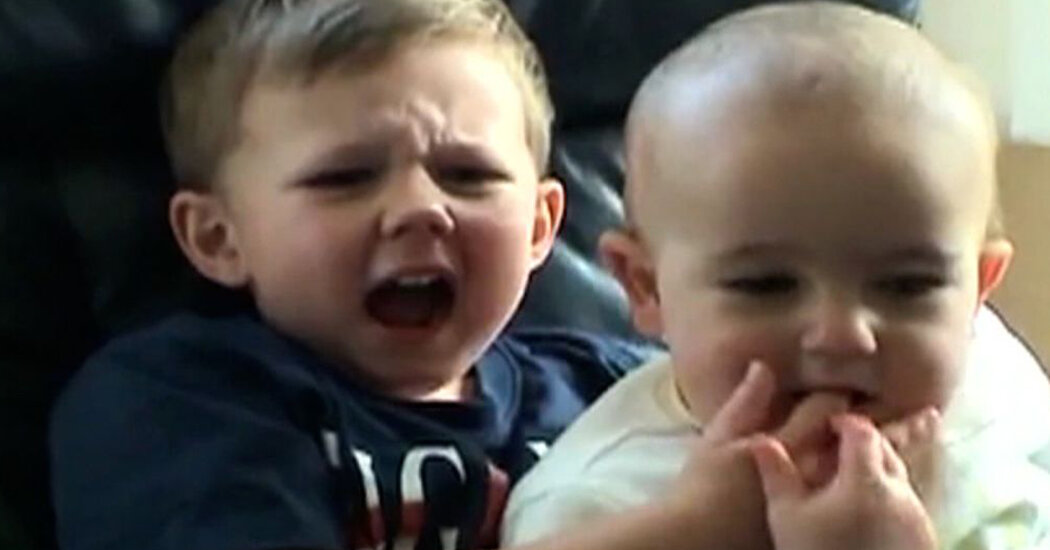 The original 2007 video “Charlie Bit My Finger,” a standard-bearer of viral internet fascination, has sold as a nonfungible token for $760,999, and the family who created it will take down the original from YouTube for good.

The original video, which has close to 900 million views, features Charlie Davies-Carr, an infant in England, biting the finger of his big brother, Harry Davies-Carr, and then laughing after Harry yells “OWWWW.”

The owner will also be able to create their own parody of the video featuring Charlie and Harry Davies-Carr.

Many duplicates of the video remain online, including one apparently rebranded by the family itself in anticipation of the auction. But the auction allowed bidders to “own the soon-to-be-deleted YouTube phenomenon” and be the “sole owner of this lovable piece of internet history.”

Disaster Girl,” a meme from a photo of Zoë Roth in 2005 looking at a house on fire in her neighborhood, sold last month in an NFT auction for $500,000. Nyan Cat, an animated flying cat with a Pop-Tart torso that leaves a rainbow trail, sold for roughly $580,000 in February. Jack Dorsey’s first tweet sold as an NFT for more than $2.9 million; a clip of LeBron James blocking a shot in a Lakers basketball game went for $100,000 in January; and an artist sold an NFT of a collage of digital images for $69.3 million, among other headline-grabbing auctions.

During an NFT sale, computers are connected to a cryptocurrency network. They record the transaction on a shared ledger and store it on a blockchain, sealing it as part of a permanent public record and serving as a sort of certification of authenticity that cannot be altered or erased.

There were 11 active bidders in the battle for the NFT that was driven mainly between two bidders named 3fmusic and mememaster. When the bidding ended Sunday, mememaster was outbid by 3fmusic by $45,444. A person with the same name also bought the “Disaster Girl” meme NTF.

years after it was first posted. It was written into a Gerber spot and a “30 Rock” episode and was the subject of countless parody videos. But it’s still well known for setting off a genre of contagiously shareable videos.

Howard Davies-Carr, the father of Charlie and Harry, told The New York Times in 2012 that even though he didn’t think of his sons as celebrities, they had nonetheless become a brand. The family was recognized in random places, like on the subway in London.

In an interview with the brothers in 2017 on The Morning, a British talk show, Howard Davies-Carr said he was filming the brothers growing up “just doing normal things” and that Charlie bit his brother’s finger while watching T.V. after a busy day in the garden.

“The video was funny, so I wanted to share it with the boys’ godfather,” Howard Davies-Carr said, adding that their godfather lived in America and that the video was initially private, but people, including his parents, had asked to see it since it was difficult to share, so he made the video public.

A few months later, when the video had at least 10,000 views, Howard Davies-Carr said he almost deleted it. Profits from the video and other opportunities allowed the family to send Charlie, Harry and their two other brothers to private school, said Shelley Davies-Carr, the boys’ mother.

The video with humble beginnings, which Charlie and Harry decided to sell, helped Shelley Davies-Carr stop working full-time when her fourth child was born.

“I was just watching TV and just decided to bite him,” Charlie Davies-Carr said in the interview. “He put his finger in my mouth, so I just bit.” Harry Davies-Carr couldn’t remember the pain from that bite.

When you’re searching for—and ultimately settling into—a new house, it’s all about prioritizing the to-do list. And in these days of … END_OF_DOCUMENT_TOKEN_TO_BE_REPLACED

More From ForbesOct 7, 2022,12:14pm EDTMenopause Supplement Industry To Grow To $22.7 Billion By 2028 As Women Seek Out Alternative … END_OF_DOCUMENT_TOKEN_TO_BE_REPLACED