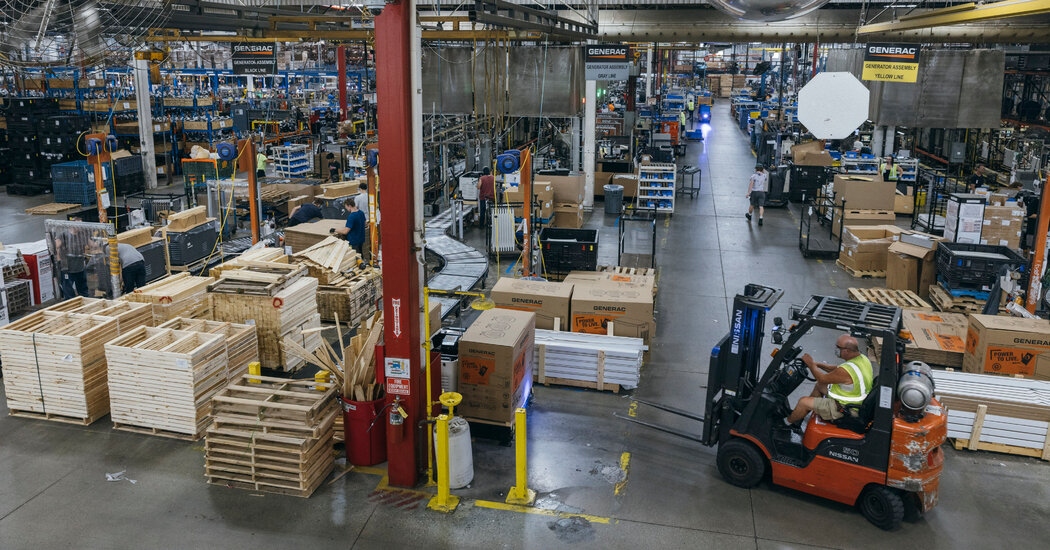 Living on the South Carolina coast means living under the threat of dangerous weather during storm season. But the added peril of the pandemic made Ann Freeman nervous.

“What do I do if there’s an evacuation or there’s a storm and you have all this coronavirus and problems with hotels?” Ms. Freeman said. “So I said, ‘Maybe now is the time.’”

That’s why Ms. Freeman spent $12,400 last year to install a Generac backup generator at her home on Johns Island, a sea island near the Charleston peninsula. The wait — about three months — seemed long.

But she was lucky: The wait is twice as long now.

Demand for backup generators has soared over the last year, as housebound Americans focused on preparing their homes for the worst, just as a surge of extreme weather ensured many experienced it.

10 deaths in New Orleans are believed to have been tied to the heat. Over the summer, officials in California warned that wildfires might once again force rolling blackouts amid record heat and the threat of wildfire. In February, a deep freeze turned deadly after widespread outages in Texas. Even lower-profile outages — last month, storms in Michigan left almost a million homes and businesses in the dark for up to several days — have many American homeowners buying mini power plants of their own.

The vast majority are made by a single company: Generac, a 62-year-old Waukesha, Wis., manufacturer that accounts for roughly 75 percent of standby home generator sales in the United States. Its dominance of the market and the growing threat posed by increasingly erratic weather have turned it into a Wall Street darling.

climate crises is shifting the priorities of American consumers.

“Instead of a nice-to-have, backup power is increasingly a need-to-have, when you’re working at home,” said Mark Strouse, a J.P. Morgan analyst who covers Generac and other alternative energy stocks.

and Etsy — have shone as a result of Covid-era shocks and economic disruptions. And the vaccine-maker Moderna is the best-performing stock in the S&P 500. But Generac and a few other alternative energy companies have ballooned in value at the same time.

struck in June during a heat wave, and a prediction in the Farmers’ Almanac of another round of storms early next year made the decision easy: It was time to buy a generator.

The 15,000-watt Generac generator was hooked up last week, big enough to keep the house snug if the power goes out this winter. “I’m not going through that again,” Ms. Collins said.

Generac’s sales are up roughly 70 percent over the past year and orders are vastly outpacing production. The new factory in South Carolina — the two others that produce residential generators are in Wisconsin — is up and running and the company plans to employ about 800 people there by the end of the year. Company officials have floated the prospect of adding further manufacturing operations closer to fast-growing markets like California and Texas, J.P. Morgan analysts reported in a recent client note.

Generac seems to need them. Average delivery times for its generators have lengthened during the pandemic.

Despite dominating the home market, Generac could be vulnerable if competitors are able to serve customers faster. Major manufacturers such as the engine-maker Cummins and the heavy equipment company Caterpillar have a relatively small share of the home generator market, but have the expertise to lift production if they see an opportunity. Generac, aware of the potential competition from other players as well as home solar panels and other solutions, has made a series of acquisitions in the battery and energy storage industry, which is emerging as a small but fast-growing source of revenue for the company.

But there’s no doubt about the demand for its core product right now.

After her generator was installed last week, Ms. Collins took a run around the neighborhood and noticed a neighbor unboxing one in the driveway.

Chief Covelli said Mr. Crimo planned the shooting for several weeks, but that the authorities had not yet established what his motive was. “We have no … END_OF_DOCUMENT_TOKEN_TO_BE_REPLACED

Kevin McKenzie and Martine van Hamel were standing in the dining room of their weekend house in Woodstock, N.Y., trying to figure out when they got … END_OF_DOCUMENT_TOKEN_TO_BE_REPLACED