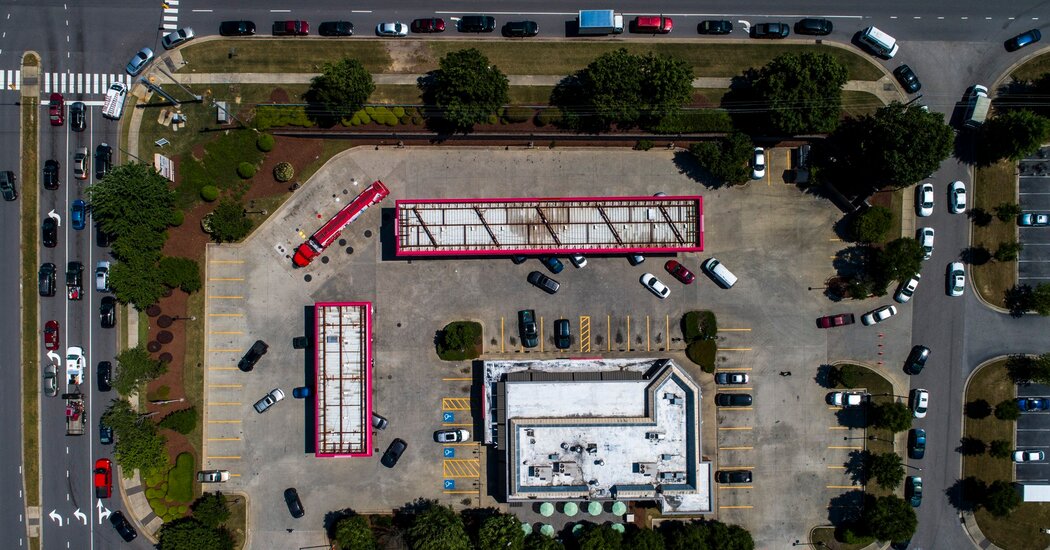 HOUSTON — When OPEC barred oil exports to the United States in 1973, creating long gasoline lines, President Richard Nixon pledged an effort that would combine the spirit of the Apollo program and the determination of the Manhattan Project.

“By the end of this decade, we will have developed the potential to meet our own energy needs without depending on any foreign energy sources,” he said in a televised address.

His timing was off — it took more than 40 years — but the country has come pretty close to energy independence in recent years thanks to a surge in domestic shale oil and natural gas production and the harnessing of solar and wind energy.

That independence, however, is fragile. Last week, cars lined up at gas stations across much of the Southeast after the Colonial Pipeline was paralyzed by a cyberattack by a criminal group seeking a ransom. The electric grid is also coming under greater stress because of climate change. In the last year, a heat wave in California and a deep freeze in Texas forced rolling blackouts as demand for power outstripped supply.

panic buying rarely seen in decades produced shortages, and prices at the pump rose as much as 20 cents a gallon for regular gasoline in some states in a few days, according to AAA.

Mr. Yergin said that drivers who lined up at pumps to fill gas cans and even plastic bags made the situation worse. The impulse to hoard harkened back to the oil shocks of the 1970s and appeared to touch a chord in the national psyche.

“People remembered gas lines even though they weren’t born yet,” Mr. Yergin said.

Colonial Pipeline, a private company, resumed full operations over the weekend, but it will take at least several more days before many gas stations are restocked.

Energy companies will come under greater pressure from governments and investors to bulk up their defenses against cyberattacks, but those and other vulnerabilities will not be easily overcome, especially after years of underinvestment.

Upgrading the energy system will not be easy. Dozens of competing companies that operate a vast web of oil and gas wells and pumping stations, transmission lines and power plants will need coaxing to make their operations more resilient to weather and criminal attacks. Considerable funding will have to come from business and government, as well as research to keep ahead of the cybercriminals. President Biden’s $2 trillion infrastructure plan devotes $100 billion to the transmission grid.

The quest for energy independence has never been a straight line, and there have been many unfortunate twists. Reliance on Middle East oil was a major consideration in military action and diplomatic strategy, including alliances with countries like Saudi Arabia with disturbing human rights records. A half-century ago, the country shifted from burning heating oil to relying more heavily on coal, which contributed to climate change.

But the search for energy independence also led to innovation. Fracking — the hydraulic fracturing of shale oil and natural gas deposits — not only slashed energy imports but also made the United States a major exporter. Suddenly oil and gas were not a national security vulnerability but a tool to further American interests.

nearly half of the transportation fuel needs of the region.

When hurricanes hit, and refineries on the Gulf shut down, gasoline and diesel prices tend to rise along the East Coast. Normally, that is not a huge problem because companies store lots of fuel close to where it is used and trucks and barges can usually make up the difference. This time, however, uncertainty about how long it would take to restore supplies made the Colonial Pipeline’s shutdown much more disruptive.

The ransomware attack was the work of DarkSide, an extortionist ring that has been responsible for scores of attacks on companies in several countries. But it is hardly the only group that infiltrates computer systems to extort money. Others go by names like REvil, Maze and LockBit.

“The technology moves so quickly, you solve one or two or twenty possible vulnerabilities in your computer systems and the hackers find a different way to get in.” said Drue Pearce, a former deputy administrator of the federal Pipeline Hazardous Materials Safety Administration.

The criminal groups represent a threat to industries beyond energy. But experts say energy is of particular concern because it is essential to a functioning economy. The peril is no less complex than reducing the United States’ reliance on foreign oil, said Bill Richardson, a former energy secretary.

“This is a new threat that we are not prepared for,” he said.

AUSTIN, Texas--(BUSINESS WIRE)--As the first multifamily management company to be recognized in the Public Relations and Marketing Excellence Awards, … END_OF_DOCUMENT_TOKEN_TO_BE_REPLACED

There have been whispers of cooling housing and rental prices in the San Francisco Bay Area, but that hasn't yet translated into practical, noticeable … END_OF_DOCUMENT_TOKEN_TO_BE_REPLACED

Cars pass in Independence Square at twilight in Kyiv, Ukraine, Monday, Oct. 31, 2022. Rolling ... [+] blackouts are increasing across Ukraine as the … END_OF_DOCUMENT_TOKEN_TO_BE_REPLACED