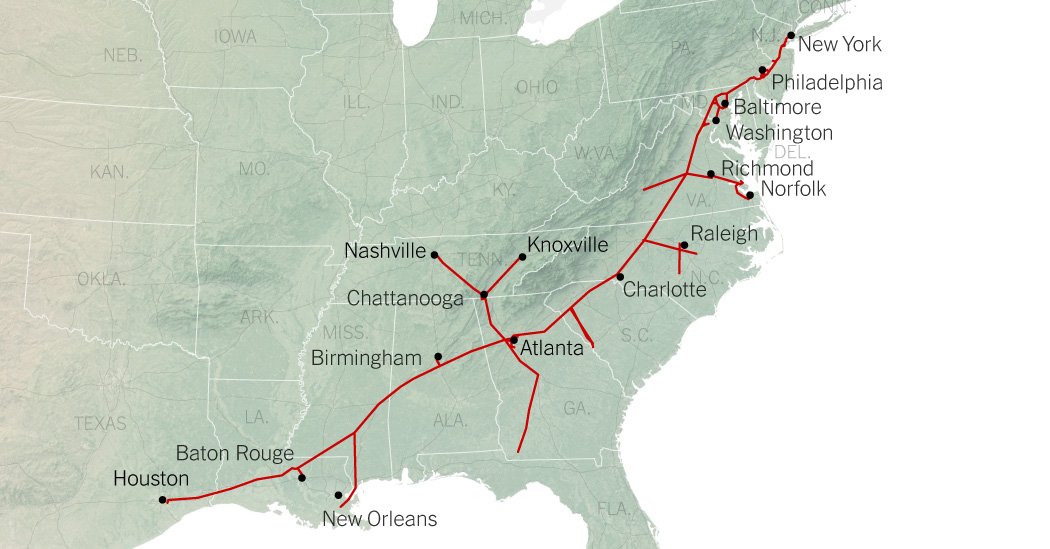 Gasoline prices continued to rise across the Southeast on Thursday, but at a slower pace generally than in recent days, as the operator of Colonial Pipeline said it had made “substantial progress” in resuming the delivery of fuel along the East Coast.

“Product delivery has commenced to all markets we serve,” the pipeline’s operator said Thursday afternoon. “It will take several days for the product delivery supply chain to return to normal. Some markets served by Colonial Pipeline may experience, or continue to experience, intermittent service interruptions.”

The pipeline, which stretches from Texas to New Jersey and delivers nearly half of the transport fuels for the Atlantic Coast, was shut down because of a ransomware cyberattack on Friday. Operations have gathered momentum since the pipeline partially restarted late Wednesday.

Gasoline prices rose by roughly 3 cents in South Carolina and Georgia from Wednesday to Thursday, about half the amount of the increases of the previous few days. But prices in Tennessee, which depends on an offshoot of the pipeline, rose by 6 cents, to $2.87 for a gallon of regular. Nationwide, the average price for a gallon of regular increased by 2 cents to $3.03, according to the AAA auto club.

Gasoline supplies vary from state to state along the pipeline, in part because some places have more storage than others. In New Jersey, only 1 percent of gasoline stations lacked fuel early Thursday morning, while more than half of the stations in Virginia, North Carolina and South Carolina were out of fuel, according to GasBuddy, an app that monitors fuel supplies.

It is likely to take at least through the weekend for supply at all gasoline stations to return to normal functioning, because it takes time for fuel to pass through the pipeline.

“They should be reaching full operational capacity as we speak, as I speak to you right now,” Mr. Biden said at the White House. “That is good news. But we want to be clear, we will not feel the effects at the pump immediately. This is not like flicking on a light switch.”

An internal assessment by the Departments of Energy and Homeland Security noted that the fuel “travels through the pipeline at 5 miles per hour” and would take “approximately two weeks to travel from the Gulf Coast to New York.” Supplemental supplies transported in tanker trucks and tanker vessels connecting the Gulf and Atlantic coasts also can take up to a week or more.

The Biden administration has temporarily eased the Jones Act, which prohibits foreign vessels from delivering goods from one domestic port to another. The administration said Thursday that a waiver had been granted to one company and that it would consider other waiver requests.

“This waiver will enable the transport of additional gas and jet fuel to ease supply constraints,” Jen Psaki, the White House press secretary, said in a statement. The Jones Act, which is over a century old and is designed to protect American shipping, is usually waived to compensate for supply interruptions during hurricanes.

Panic buying contributed to the fuel shortages. At some stations, people were filling up gasoline cans, forcing others to wait longer and causing shouting matches.

Friday is traditionally the biggest day for gasoline sales. But energy analysts were optimistic that the crisis would soon pass.

“The restart of the pipeline is very positive news for motorists,” said Jeanette McGee, the director for external communications for AAA. “While impact won’t be seen immediately and motorists in affected areas can expect to see a few more days of limited fuel supply, relief is coming.”

She said station pumps will be full in “several days,” ahead of the Memorial Day weekend, a heavy driving time.

The Federal Bureau of Investigation has identified an organized crime group called DarkSide as the attacker. The group is believed to operate from Eastern Europe, possibly Russia. While the attack was not on the pipeline itself, Colonial shut down both its information systems and the pipeline until it was sure it could safely manage the flow of fuel.

AUSTIN, Texas--(BUSINESS WIRE)--As the first multifamily management company to be recognized in the Public Relations and Marketing Excellence Awards, … END_OF_DOCUMENT_TOKEN_TO_BE_REPLACED

There have been whispers of cooling housing and rental prices in the San Francisco Bay Area, but that hasn't yet translated into practical, noticeable … END_OF_DOCUMENT_TOKEN_TO_BE_REPLACED

Cars pass in Independence Square at twilight in Kyiv, Ukraine, Monday, Oct. 31, 2022. Rolling ... [+] blackouts are increasing across Ukraine as the … END_OF_DOCUMENT_TOKEN_TO_BE_REPLACED