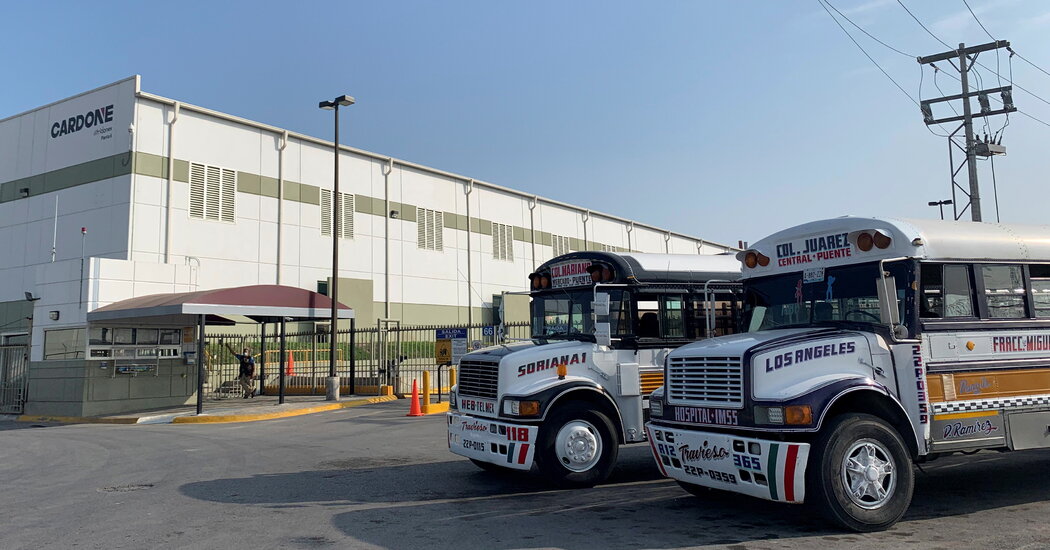 WASHINGTON — The A.F.L.-C.I.O. and other groups plan on Monday to file a complaint with the Biden administration over claims of labor violations at a group of auto parts factories in Mexico, a move that will pose an early test of the new North American trade deal and its labor protections.

The complaint focuses on the Tridonex auto parts factories in the city of Matamoros, just across the border from Brownsville, Texas. The A.F.L.-C.I.O. said workers there have been harassed and fired over their efforts to organize with an independent union, SNITIS, in place of a company-controlled union. Susana Prieto Terrazas, a Mexican labor lawyer and SNITIS leader, was arrested and jailed last year in an episode that received significant attention.

The trade deal, the United States-Mexico-Canada Agreement, was negotiated by the Trump administration to replace the North American Free Trade Agreement and took effect last summer. While it was negotiated by a Republican administration, the deal had significant input from congressional Democrats, who controlled the House and who insisted on tougher labor and environmental standards in order to vote in favor of the pact, which needed approval from Congress.

The trade pact required Mexico to make sweeping changes to its labor system, where sham collective bargaining agreements known as protection contracts, which are imposed without the involvement of employees and lock in low wages, have been prevalent.

released in December by an independent board created by the United States to monitor the labor changes said that Mexico had made progress but that significant obstacles remained. The report noted that the protection contract system was still in place, and that most unionized workers still could not elect their leaders in a democratic manner.

Ben Davis, the director of international affairs for the United Steelworkers and the board’s chair, said the complaint to be filed on Monday “has all the elements of the structural problem that we face with worker rights in Mexico.” The rapid response mechanism, he said, is a way to hold companies accountable.

“This is the first time that we’ve had anything like this in a trade agreement,” he said, “and so we think it’s pretty important for it to be used, to be used effectively and hopefully to be something that we can apply in other places.”

The United States trade representative, Katherine Tai, previously served as the chief trade counsel for the powerful House Ways and Means Committee. In that post, she played a key role in negotiations between House Democrats and the Trump administration over revisions to the trade agreement.

Ms. Tai has said that enforcing the agreement is a priority, and the first meeting of the commission that oversees the pact — consisting of Ms. Tai and her counterparts from Canada and Mexico — is set to take place next week, according to a spokeswoman for the Mexican Embassy in Washington.

At a Senate hearing last month, Ms. Tai said there were “a number of concerns that we have with Mexico’s performance of its commitments under U.S.M.C.A.,” without offering specifics.

“We did our very best to put in the most effective tools for enforcement that we know how,” she said at another point in the hearing. “And they may not be perfect, but we’re not going to know how effective they’re going to be if we don’t use them.”

The Bay Area is the last place in the U.S. with rental prices below pre-pandemic levels, according to a new report from Apartment List. That seems … END_OF_DOCUMENT_TOKEN_TO_BE_REPLACED

BUCHA, Ukraine — A breeze rustles through the cherry blossoms in bloom on almost every block in this small city, the white petals fluttering onto … END_OF_DOCUMENT_TOKEN_TO_BE_REPLACED