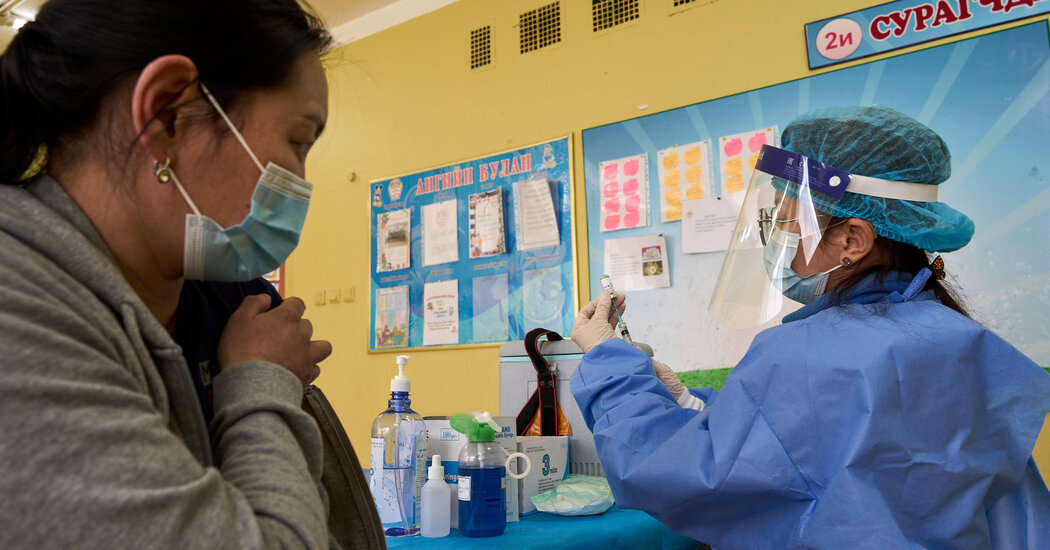 Mongolia, a country of grassy hills, vast deserts and endless skies, has a population not much bigger than Chicago’s. The small democratic nation is used to living in the shadow of its powerful neighbors, Russia and China.

But during a pandemic, being a small nation sandwiched between two vaccine makers with global ambitions can have advantages.

At a time when most countries are scrambling for coronavirus vaccines, Mongolia now has enough to fully vaccinate its entire adult population, in large part thanks to deals with both China and Russia. Officials are so confident about the nation’s vaccine riches that they are promising citizens a “Covid-free summer.”

Mongolia’s success in procuring the vaccines in the span of a few months is a big victory for a low-income, developing nation. Many poor countries have been waiting in line for shots, hoping for the best. But Mongolia, using its status as a small geopolitical player between Russia and China, was able to snap up doses at a clip similar to that of much wealthier countries.

deep skepticism over their homegrown vaccines.

Mongolia is a buffer between eastern Russia, which is resource rich and mostly unpopulated, and China, which is crowded and hungry for resources. While Russia and China are often aligned on the global stage, they have a history of conflict and are wary of each others’ interests in Mongolia. Those suspicions can be seen in their vaccine diplomacy.

arrived this week. Mongolia’s most recent agreement with China’s Sinopharm Group, which is state-owned, was made days before the company received emergency authorization from the World Health Organization.

Mongolia was late to the global clamber for Covid-19 vaccines. For nearly a year officials boasted that there were no local cases. Then came an outbreak in November. Two months later, political crisis precipitated by the mishandling of the virus led to the sudden resignation of the prime minister. The prospect of continued coronavirus restrictions threatened to throw the country into further political turmoil.

The new prime minister, Oyun-Erdene Luvsannamsrai, pledged to restart the economy, which had suffered from lockdowns and border closures, particularly in the south, where Mongolian truck drivers ferry coal across the border to China’s steel mills. But these plans were complicated by surging cases, with the daily count going from hundreds a day to thousands.

“We were quite desperate,” said Bolormaa Enkhbat, an economic and development policy adviser to Mr. Luvsannamsrai.

Opening up more of the border between China and Mongolia was also a part of the vaccine discussions, Chinese and Mongolian officials said in Chinese state media. Mongolia needs China to buy its coal — exports to the country make up nearly a quarter of Mongolia’s annual economic growth. The revenues helped to pad Mongolia’s budget by a quarter last year.

After a month of back and forth, the Mongolian government struck a deal in March with Russia’s Gamaleya Research Institute, too, for one million doses of the Sputnik vaccine. Days later, Mongolia finalized an agreement to buy 330,000 additional doses of the Sinopharm vaccine.

Ulaanbaatar, Mongolia’s capital, 97 percent of the adult population has received a first dose and more than half are fully vaccinated, according to government statistics. Across the country, more than three quarters of Mongolians have already received one shot.

China has shut its border and stopped purchasing Mongolian coal.

Mongolians have also expressed a preference for Russia’s Sputnik vaccine. To get the population to take the Sinopharm shot, the government has offered each citizen 50,000 tugriks — about $18 — to get fully vaccinated. The average monthly salary in 2020 was $460.

The terms and pricing of the Sinopharm and Sputnik deals were not made public, and Mongolia’s foreign ministry declined to comment on pricing. Representatives for the Gamaleya Research Institute and Sinopharm did not respond to requests for comment.

While some global health experts have questioned whether Sinopharm will be able to continue to deliver on its commitments overseas, it has delivered all of the doses Mongolia ordered. China has said it can make as many as five billion doses by the end of the year, though officials have warned that the country is struggling to make enough shots for its citizens.

China, for its part, may be playing a long game, said Julian Dierkes, an associate professor at the University of British Columbia who specializes in Mongolian politics. Though many Mongolians may still not trust China, the Mongolian government will remember how it made its vaccines available at a critical moment.

“We could coin a phrase here: ‘The opportunity of smallness,’” he said.

It’s a property that offers a unique open floor plan—plus a hot tub with a view.“It was a Methodist church located in a historic little area of St. … END_OF_DOCUMENT_TOKEN_TO_BE_REPLACED