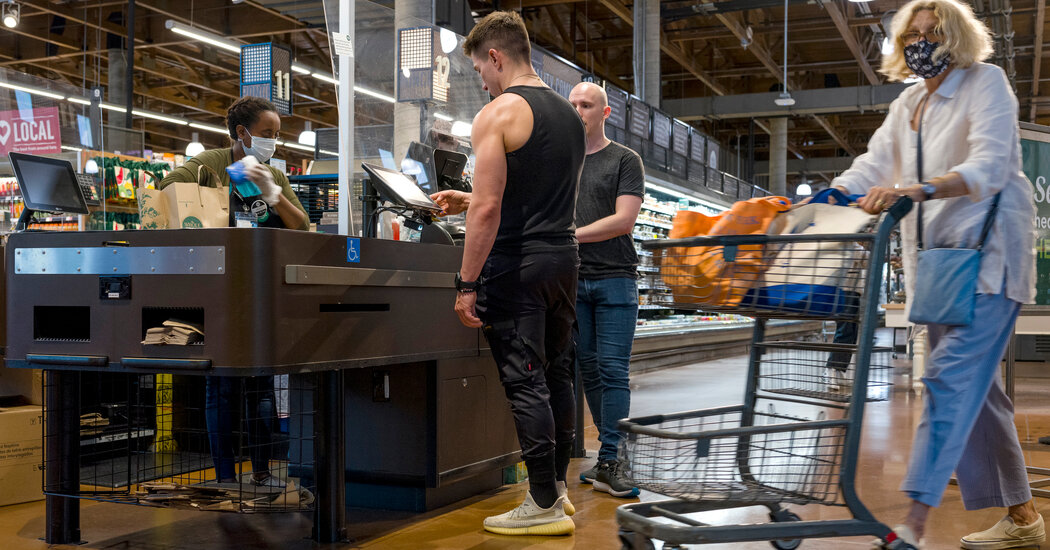 For much of the pandemic, Amazon has offered free on-site Covid testing for employees. It incorporated a variety of design features into warehouses to promote social distancing. But a worker at an Amazon warehouse in Oregon, who did not want to be named for fear of retribution, said there had been a gradual reduction in safety features, like the removal of physical barriers to enforce social distancing.

Kelly Nantel, an Amazon spokeswoman, said that the company had removed barriers in some parts of warehouses where workers don’t spend much time in proximity, but that it had kept up distancing measures in other areas, like break rooms.

“We’re continuously evaluating the temporary measures we implemented in response to Covid-19 and making adjustments in alignment with public health authority guidance,” Ms. Nantel said. She added that the company would “begin ramping down our U.S. testing operations by July 30, 2021.”

At REI, the outdoor equipment and apparel retailer, four workers in different parts of the country, who asked not to be named for fear of workplace repercussions, complained that the company had recently enacted a potentially more punitive attendance policy it had planned to put in place just before the pandemic. Under the policy, part-time workers who use more than their allotted sick days are subject to discipline up to termination if the absences are unexcused. The workers also said they were concerned that many stores — after restricting capacity until this spring — had become more and more crowded.

Halley Knigge, a spokeswoman for REI, said that under its new policies the company allowed part-time workers to accrue sick leave for the first time and that the disciplinary policy was not substantively new but merely reworded. The stores, she added, continue to restrict occupancy to no more than 50 percent capacity, as they have since June 2020.

Workers elsewhere in the retail industry also complained about the growing crowds and difficulty of distancing inside stores like supermarkets. Karyn Johnson-Dorsey, a personal shopper from Riverside, Calif., who finds work on Instacart but also has her own roster of clients, said it had been increasingly difficult to maintain a safe distance from unmasked customers since the state eased masking and capacity restrictions in mid-June.

You were seeing double this week: A spectacular $54 million compound featuring two equally luxurious mansions separated by a private lake in Southwest … END_OF_DOCUMENT_TOKEN_TO_BE_REPLACED

Taylor Heinicke #4 of the Washington Football Team celebrates after defeating the Seattle Seahawks at FedExField on November 29, 2021 in Landover, … END_OF_DOCUMENT_TOKEN_TO_BE_REPLACED

Members of the Ukrainian Police force, Larisa, 31, and Roman, 30, get married at a wedding hall at an expo center in Kyiv, Ukraine, on … END_OF_DOCUMENT_TOKEN_TO_BE_REPLACED