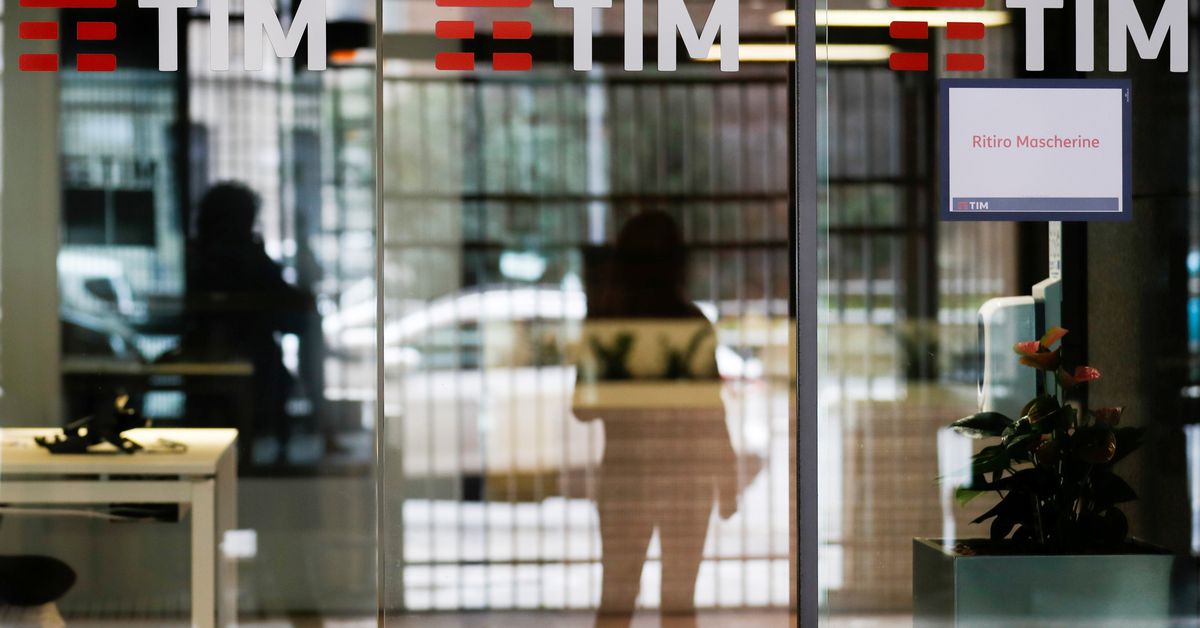 The Tim logo is seen at its headquarters in Rome, Italy November 22, 2021. REUTERS/Yara Nard

The former phone monopolist said in a statement the head of TIM Brazil, Pietro Labriola, had been named general manager so as to ensure the group continued to operate smoothly, confirming what sources had told Reuters earlier on Friday.

The CEO had offered to relinquish its responsibilities on Thursday, saying in a letter he did not want to stand in the way of the board giving prompt consideration to KKR’s approach.

TIM said it had set up a special committee headed by Rossi to study the offer with the help of advisers it was preparing to appoint.

TIM’s nominations committee will work with headhunters Spencer Stuart to ensure a stable leadership for the group over the medium term, taking into account the evolution of TIM’s structure and assets, it said.

Sources had said the board would also discuss the threat to earnings from a soccer rights deal that has failed to help revenue and has contributed to two profit warnings.

TIM’s disappointing results have strengthened Vivendi’s hand in pushing out Gubitosi who had been brought in by rival TIM investor Elliott in 2018.

Gubitosi remained on as a director, preventing Labriola from joining the board and being named as CEO on Friday, a role which sources said he may take on at a later stage.

Gubitosi, in his letter to the board, criticised directors for stalling on KKR’s offer to please some shareholders.

The statement TIM issued at the end of a six-hour board meeting made no mention of granting KKR access to TIM’s data for due diligence.

Gubitosi had rejected speculation that he was close to KKR, which he first brought on board last year, striking a 1.8 billion euro deal that handed the fund a 37.5% stake in TIM’s so-called last-mile network reaching into people’s homes.

TIM’s board first examined on Sunday KKR’s non-binding proposal to take it private in a 33 billion euro deal including debt.

The offer followed a downgrade of TIM’s debt that pushed it further into junk territory a week ago, which two sources said had hastened KKR’s decision because TIM was at risk of breaching bank covenants.

One of the sources said a further downgrade to TIM’s financial outlook cannot be ruled out, in what would be a fresh blow to holders of its debt, already equal to around four times TIM’s core profit.

The face-off between Gubitosi and Vivendi is the latest boardroom crisis at TIM, which has had three CEOs since 2015, when the French media group began building its 24% stake.

The takeover offer for the whole of TIM comes as Italy prepares to spend 6.7 billion euros of European Union recovery fund to speed up ultra-fast broadband rollout across the nation.

TIM’s fixed network, which the government is keen to see upgraded to fibre, is Italy’s main telecoms infrastructure and Rome has said its response to KKR will hinge on plans for the network.

Rome has special powers to block moves on strategic companies such as TIM but the executive of Prime Minister Mario Draghi has hailed KKR’s interest as good news for Italy.

Sources have said KKR, which consulted the government before tabling its offer, plans to carve out the network and give state investor CDP – currently TIM’s second-biggest shareholder – a leading role in overseeing it. ($1 = 0.8874 euros)

You have to go back to the start of the coronavirus pandemic to find mortgage rates as high as they are this week.According to the latest data … END_OF_DOCUMENT_TOKEN_TO_BE_REPLACED