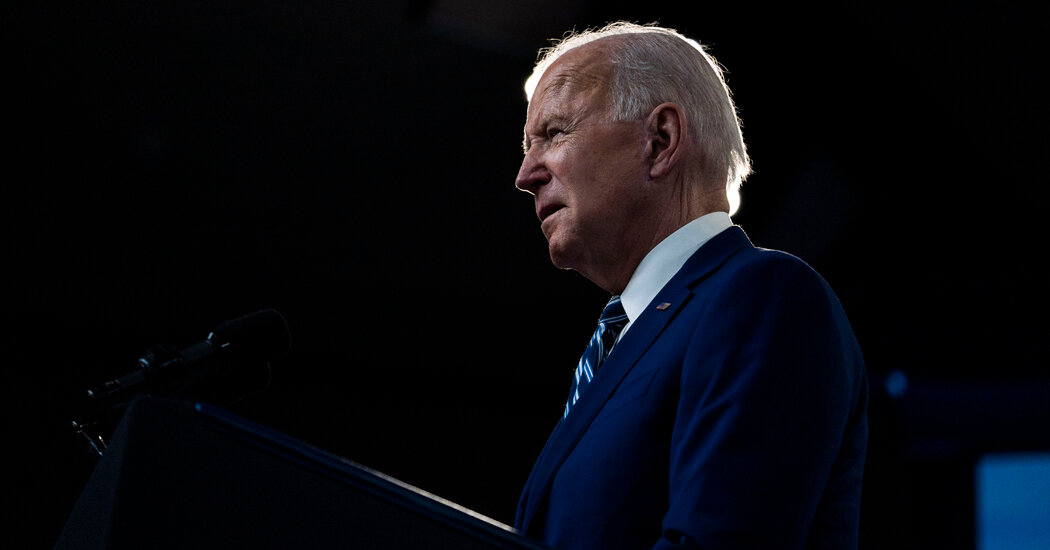 WASHINGTON — Senior Democrats on Monday proposed a tax increase that could partly finance President Biden’s plans to pour trillions of dollars into infrastructure and other new government programs, as party leaders weighed an aggressive strategy to force his spending proposals through Congress over unified Republican opposition.

The moves were the start of a complex effort by Mr. Biden’s allies on Capitol Hill to pave the way for another huge tranche of federal spending after the $1.9 trillion stimulus package that was enacted this month. The president is set to announce this week the details of his budget, including his much-anticipated infrastructure plan.

He is scheduled to travel to Pittsburgh on Wednesday to describe the first half of a “Build Back Better” proposal that aides say will include a total of $3 trillion in new spending and up to an additional $1 trillion in tax credits and other incentives.

Yet with Republicans showing early opposition to such a large plan and some Democrats resisting key details, the proposals will be more difficult to enact than the pandemic aid package, which Democrats muscled through the House and Senate on party-line votes.

afford to lose only eight votes, Representative Tom Suozzi, Democrat of New York, warned that he would not support the president’s plan unless it eliminated a rule that prevents taxpayers from deducting more than $10,000 in local and state taxes from their federal income taxes. He is one of a handful of House Democrats who are calling on the president to repeal the provision.

And in the Senate, where most major legislation requires 60 votes to advance, Senator Chuck Schumer of New York, the majority leader, was exploring an unusual maneuver that could allow Democrats to once again use reconciliation — the fast-track budget process they used for the stimulus plan — to steer his spending plans through Congress in the next few months even if Republicans are unanimously opposed.

While an aide to Mr. Schumer said a final decision had not been made to pursue such a strategy, the prospect, discussed on the condition of anonymity, underscored the lengths to which Democrats were willing to go to push through Mr. Biden’s agenda.

The president’s initiatives will feature money for traditional infrastructure projects like rebuilding roads, bridges and water systems; spending to advance a transition to a lower-carbon energy system, like electric vehicle charging stations and the construction of energy-efficient buildings; investments in emerging industries like advanced batteries; education efforts like free community college and universal prekindergarten; and measures to help women work and earn more, like increased support for child care.

The proposals are expected to be partly offset by a wide range of tax increases on corporations and high earners.

would have temporarily removed the cap, but it stalled in the Senate and attempts to include it in pandemic relief legislation were unsuccessful.

He is among the Democrats who have requested a meeting with Mr. Biden to discuss repealing the cap, according to a letter obtained by The New York Times.

“No SALT, no dice,” declared another Democrat, Representative Josh Gottheimer of New Jersey.

“There’s plenty of ways, in my opinion, to raise revenue and reinstate SALT,” he said in an interview, adding that he wanted to see the full details of the proposal.

budget blueprint that was approved last month to include the infrastructure plan, which would enable them to undertake a second reconciliation process before the end of the fiscal year on Sept. 30 and pass it with a simple majority.

Elizabeth MacDonough, the parliamentarian, will have to issue guidance on whether doing so is permissible under Senate rules.

If Democrats succeed, they could potentially use the reconciliation maneuver at least two more times this calendar year to push through more of Mr. Biden’s agenda.

SAN FRANCISCO — Cleve Jones has lived in the Castro neighborhood for nearly 50 years, almost from the day he graduated from high school in Phoenix and … END_OF_DOCUMENT_TOKEN_TO_BE_REPLACED

A home inspection can spare you from unpleasant surprises after you buy. After crunching the numbers, searching your favorite neighborhoods, and … END_OF_DOCUMENT_TOKEN_TO_BE_REPLACED