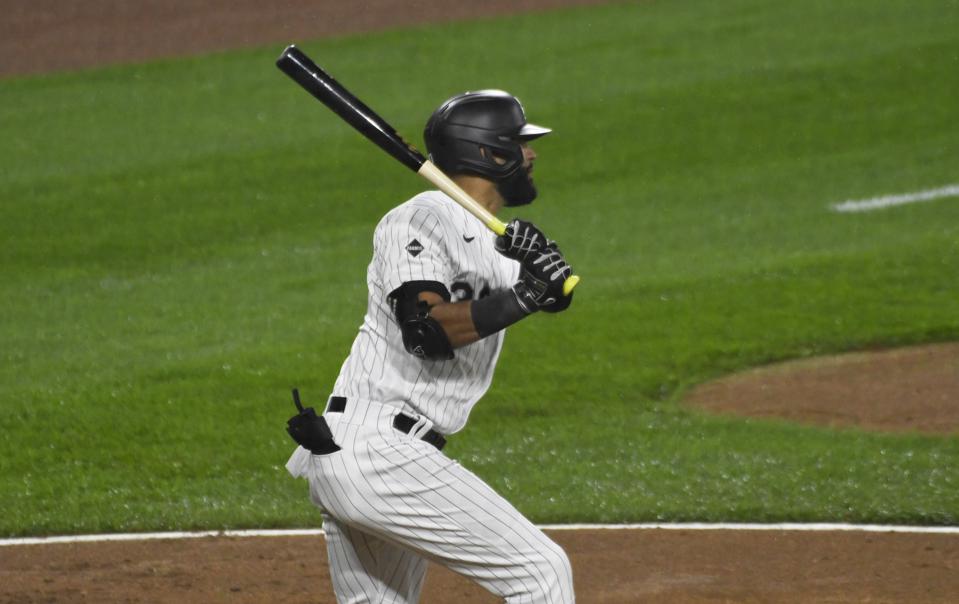 Nomar Mazara is one of the most tantalizing bats on the Detroit Tigers. He is an ideal physical profile, he is capable of high end exit velocities and he can launch baseballs 505 feet. The upside is there, but Mazara has struggled to tap into his potential consistently.

As noted by Chris McCoskey of the Detroit News and Jay Jaffe of Fangraphs, Mazara is capable of hitting the ball hard consistently. Unfortunately- and 2020 was the best or worst example of this- Mazara struggled to get the ball in the air.

While it’s easy to look at Mazara’s ground ball rate, it does not answer the question why he hits the ball on the ground so much. Furthermore, the idea of getting Mazara “on plane” is broadly what needs to happen in order to help him elevate the ball and his game. But how, is the larger question.

This problem is multifaceted. A dive into Mazara’s 2020 numbers show that Mazara posted his second lowest average launch angle and second highest GB% of his career.

The other significant statistic to note is that Mazara has hit the ball to the opposite field more over the past two seasons than he has at any point in his career. In 2019 and 2020 he posted a 32.1 and 35.9 oppo% respectively. This is almost a 6% differential from his next highest oppo% in his 2016 rookie campaign.

Mazara’s issue seems to stem from both a swing issue and an approach issue. Despite the small sample, in 2020 pitchers threw to the outer third of the plate against Mazara roughly 47% of the time. One mistake the numbers seem to reflect, is that Mazara has focused more energy into beating the shift instead of trying to hit over it.

That gets compounded by the fact that Mazara is more of a rotational hitter with a flatter swing path. Mazara is a strong guy with excellent bat speed. This explains why he’s able to achieve high end exit velocities when he makes contact-especially to the opposite field. However, his flatter bat path and rotational movement causes him to either wrap his barrel around outside pitches and hit them on the ground pull side, or he has to perfectly time everything in order to hit the ball to the opposite field with something that may resemble optimal contact.

Over his career, Mazara has hit 18 home runs on pitches in attack zones 1, 4, 7 and 11. Of those 18, he has hit seven to left field and two of those were fly balls into the Crawford Boxes at Minute Maid Park against the Houston Astros. None of those home runs came against fastballs over 91.8 mph.

When you take all of this data it seems that Mazara’s power to the opposite field is more a product of factors like his raw power and bat speed coalescing perfectly with the arrival of the pitch than a swing that is designed to drive the ball that way.

Since Nomar Mazara still tends to swing on a flatter, more transverse plane, he has difficulty hitting through multiple contact points and truly driving the ball with loft to the opposite field. The video from the tweet above demonstrates that tendency.

Hitting coach Scott Coolbaugh hopes to tap into Mazara’s monster potential. In order to right the ship, look for Mazara to hunt for pitches to pull more frequently in an attempt to try to hit over shift instead of attempting to beat it. Mazara also has to be able to work more directionally through outside pitches in order to drive them, as opposed to just running into them. Working more directionally should also improve his vertical bat angle, especially on pitches on the outer third of the plate.

The Detroit Tigers only have Nomar Mazara on a one year deal, but if they find a way to get him swinging the bat the way people believe he can, it would signal a new chapter in the Tigers’ rebuild. The Tigers have struggled to make their reclamation projects work in recent years, but with a new coaching staff, perhaps a new day has dawned in Detroit.

Pope Francis spoke to the faithful from his study overlooking St. Peter’s Square on Sunday, the first time he had done so in just over a month.“I’ll … END_OF_DOCUMENT_TOKEN_TO_BE_REPLACED

LONDON — Seeking to salve an old wound at a time of sorrow for Britain’s royal family, the political leader of the Irish republican movement … END_OF_DOCUMENT_TOKEN_TO_BE_REPLACED

Just before the bobcat attacked, the quiet subdivision where Happy and Kristi Wade live in Burgaw, N.C., was the very picture of suburban … END_OF_DOCUMENT_TOKEN_TO_BE_REPLACED