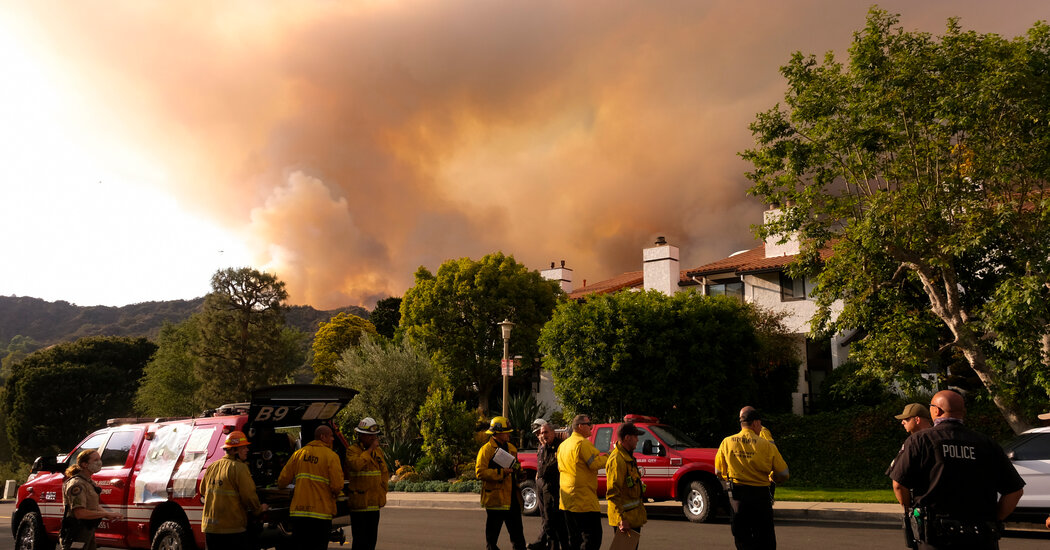 As a wildfire blazed near the Pacific Palisades neighborhood of Los Angeles, a photo of a homeless man was posted on Saturday night on an app called Citizen, which alerts members of the public to crimes and hazards around them.

The app had offered $30,000 to anyone who could provide information that led to the arrest of the man. Tips flew in.

The police detained one man — determined he was not a suspect for alleged arson — and then arrested another person, the authorities said on Monday. By Sunday, Citizen had said its identification of the first man, Devin Hilton, was a mistake. His photo had appeared on the app for 15 hours.

In a statement, the company said that it regretted posting the photo without having coordinated with the appropriate agencies. “Once we realized this error, we immediately retracted the photo and reward offer,” it said. “We are actively working to improve our internal processes to ensure this does not occur again. This was a mistake we are taking very seriously.”

told a Spectrum News reporter that the actions of the Citizen app were potentially “disastrous.”

Innocent people are harassed by trolls and wrongly labeled criminals all the time on the internet, sometimes with grave consequences. But the incident in Los Angeles illustrated the potential stakes when companies, with hundreds of thousands of users, rally people around unsubstantiated tips and accusations.

Citizen said its mission is to keep people safe and informed. “We absolutely do not believe in putting law enforcement in the hands of the public,” a statement said.

Citizen, which was created in New York City in 2017, uses cellphone locations to alert its seven million users of safety hazards and possible criminal activities in their areas, including ones that are unfolding in real time with live discussions and footage from users who are at the scene. In the last few years, the company has expanded to Los Angeles, Baltimore and more than a dozen other locations.

Los Angeles County partnered with Citizen during the pandemic to produce an app for contact tracing.

On its website, Citizen says the app allows users to “get the real story from people on the scene” and when possible, contribute to help resolve a situation.

“You used to have to call a police tip line to help,” it says. “Now you can use Citizen to broadcast live video, sharing relevant updates with others.”

Citizen relies on police, fire and emergency radio transmissions and documents them on a map. It also suggests that users document nearby crime scenes if they’re able to safely stream from there.

After the wildfire began on Friday, Citizen had received tips from users and people who lived near the wildfire that the police were searching for a person of interest, along with a photo of him, the company’s statement said. Using a new product, called OnAir, users uploaded live interviews with neighbors and live streamed video on the ground. “OnAir is a new product with strict validation protocols, which we failed to follow,” the statement said.

Citizen, in its statement, said this was the first time it had offered a cash reward for information about someone. “To be honest, we don’t know if it’s something we will do going forward,” the statement said.

Mr. Hilton could not immediately be reached for comment.

At a briefing with reporters on Monday, Chief Ralph M. Terrazas of the Los Angeles Fire Department explained that the first person detained, accused of arson online, “turned out not to be a suspect.”

The second person, a 48-year-old man named Ramon Rodriguez, was arrested Sunday afternoon, according to the Los Angeles Police Department. It was not clear whether he had a lawyer.

“We feel we have the right person,” Chief Terrazas said of the second man.

AUSTIN, Texas--(BUSINESS WIRE)--As the first multifamily management company to be recognized in the Public Relations and Marketing Excellence Awards, … END_OF_DOCUMENT_TOKEN_TO_BE_REPLACED

There have been whispers of cooling housing and rental prices in the San Francisco Bay Area, but that hasn't yet translated into practical, noticeable … END_OF_DOCUMENT_TOKEN_TO_BE_REPLACED

Cars pass in Independence Square at twilight in Kyiv, Ukraine, Monday, Oct. 31, 2022. Rolling ... [+] blackouts are increasing across Ukraine as the … END_OF_DOCUMENT_TOKEN_TO_BE_REPLACED