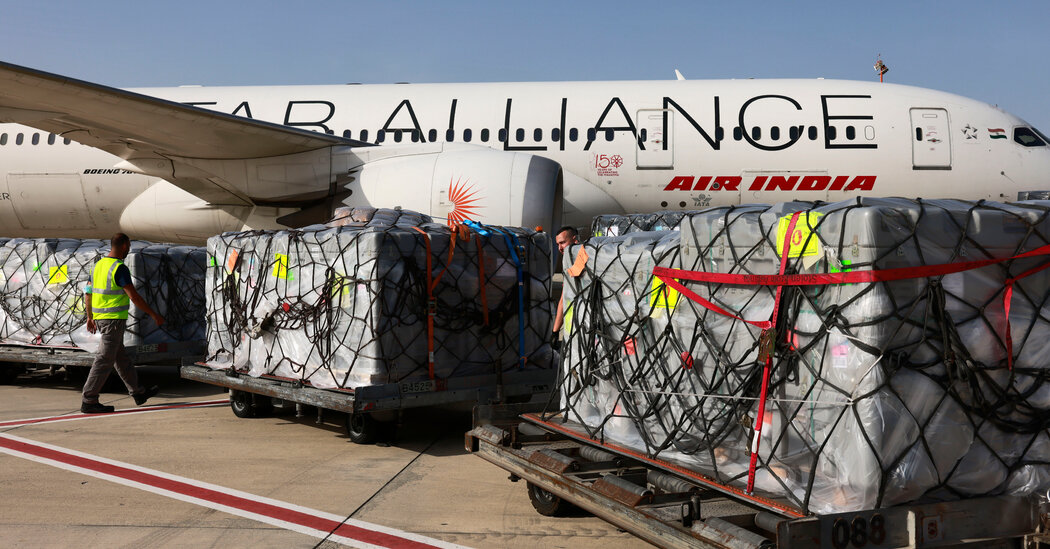 Bake sales on Instagram. Online fund-raisers involving Hollywood celebrities. Pledges of aid from companies like Mastercard and Google. A middle-of-the-night flight by a FedEx cargo plane transporting thousands of oxygen concentrators and masks.

India’s devastating surge in Covid-19 cases has galvanized corporations, nonprofit organizations and individuals in the United States into raising millions of dollars and sending medical supplies to the nation of 1.4 billion.

But a sweeping change to India’s decades-old law governing foreign donations is choking off foreign aid just when the country needs it desperately. The amendment, passed by the government of Prime Minister Narendra Modi in September with little warning, limits international charities that donate to local nonprofits.

The effect is far-reaching. Almost overnight, the amendment gutted a reliable source of funding for tens of thousands of nongovernmental organizations, or N.G.O.s, that were already stretched thin by the pandemic. It prompted international charities to cut back giving that supported local efforts — and supplemented the government’s work — in fields such as health, education and gender.

more than 22 million infections and over 236,000 deaths, but experts say the toll is severely undercounted. Medical oxygen is in short supply. Hospitals are turning away patients. Only a tiny fraction of the population has been vaccinated. Mr. Modi’s government has come under increasing criticism inside and outside the country over its handling of the second wave.

Nongovernmental organizations help provide basic health services in India, picking up the slack in a country where government spending in that area totals 1.2 percent of gross domestic product. The United States spends close to 18 percent on health care. When the pandemic first surged in India, in March 2020, Mr. Modi asked NGOs to help provide supplies and protective gear and to spread the message on social distancing.

At the same time, India’s relationship with NGOs — a catchall term for the roughly three million nonprofits working across the country, including religious, educational and advocacy groups — has occasionally been fraught.

about a quarter of India’s NGO funding — roughly $2.2 billion — came from foreign donors, according to Bain & Co., the consulting firm. The September amendment, which was met with a backlash from India’s vocal community of activists, changed the landscape drastically.

“It came into existence so quickly that there was not the kind of public input or eyes on it that could tell you why it came into existence,” said Ted Hart, the chief executive of Charities Aid Foundation of America, an Alexandria, Va., nonprofit. “It was a shock.”

The Indian diaspora of about four million people in the United States has swung into action. Some have given money to online platforms such as GiveIndia that route money to Indian nonprofits set up to receive foreign contributions.

It took just a few days for Indiaspora, a nonprofit community of mainly Indian-American donors, to raised around $5 million, including $1.6 million through an online fund-raiser in Hollywood.

“The approach we’ve taken is that the house is burning,” said Indiaspora’s founder, M.R. Rangaswami, a Silicon Valley investor and entrepreneur who lost his sister to Covid-19 in India. But his group is stepping carefully in giving that money away. It decided to stick with a small group of well-established nonprofits to which to direct its funding.

“The way we’re handling our giving is that we’re making sure that the organizations are F.C.R.A. compliant,” Mr. Rangaswami said.

AUSTIN, Texas--(BUSINESS WIRE)--As the first multifamily management company to be recognized in the Public Relations and Marketing Excellence Awards, … END_OF_DOCUMENT_TOKEN_TO_BE_REPLACED

There have been whispers of cooling housing and rental prices in the San Francisco Bay Area, but that hasn't yet translated into practical, noticeable … END_OF_DOCUMENT_TOKEN_TO_BE_REPLACED

Cars pass in Independence Square at twilight in Kyiv, Ukraine, Monday, Oct. 31, 2022. Rolling ... [+] blackouts are increasing across Ukraine as the … END_OF_DOCUMENT_TOKEN_TO_BE_REPLACED