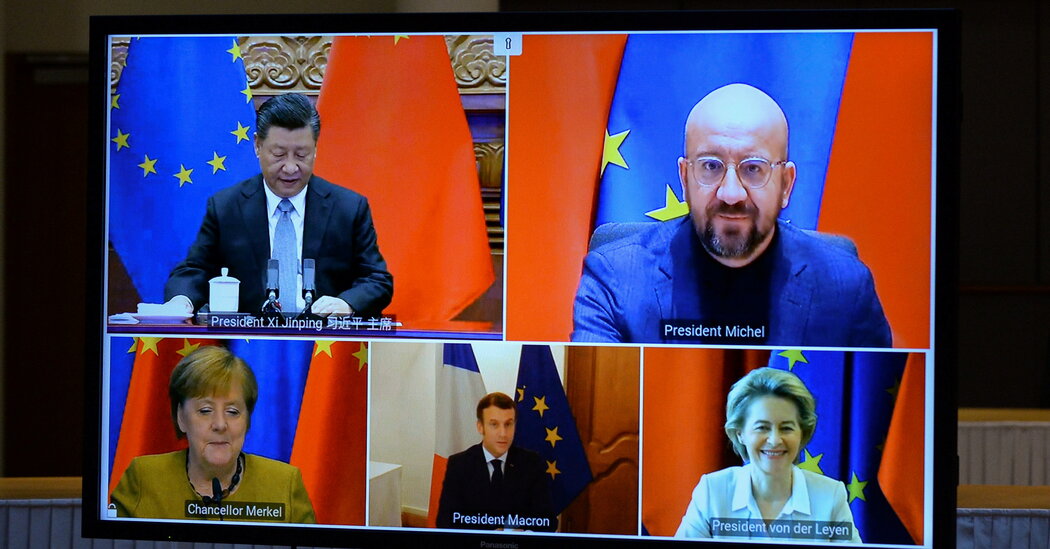 The European Parliament halted progress Thursday on a landmark commercial agreement with China, citing the “totalitarian threat” from Beijing because of its record on human rights and its sanctions against Europeans who have been critical of the Chinese government.

By an overwhelming majority, members of Parliament passed a resolution refusing to ratify the so-called Comprehensive Agreement on Investment until China lifts sanctions on prominent European critics of Beijing. The members of Parliament also warned that they could refuse to endorse the agreement because of China’s treatment of Muslim minorities and its suppression of democracy in Hong Kong.

“The human rights situation in China is at its worst since the Tiananmen Square massacre,” the resolution said, accusing China of detaining more than one million people, mostly Muslim Uyghurs in Xinjiang province, a charge the Chinese government has denied.

sanctions against four Communist Party officials after accusing them of being responsible for human rights violations.

China retaliated with sanctions against members of the European Parliament, including Reinhard Bütikofer, a member of the Greens faction from Germany and prominent critic of Beijing. They are not allowed to travel to China or do business with people in China.

The investment agreement was already in trouble. Valdis Dombrovskis, the European commissioner for trade, said earlier in May that work to finalize the pact was delayed because of repressive Chinese policies. The European Commission, the European Union’s administrative arm, also took steps this month to clamp down on Chinese companies that receive subsidies from the government, giving them an unfair competitive edge.

The resolution passed Thursday by a vote of 599 in favor and 30 against, with 58 abstentions. The no votes came from a handful of far-right or far-left members of Parliament.

It’s a property that offers a unique open floor plan—plus a hot tub with a view.“It was a Methodist church located in a historic little area of St. … END_OF_DOCUMENT_TOKEN_TO_BE_REPLACED